This is a time for solidarity 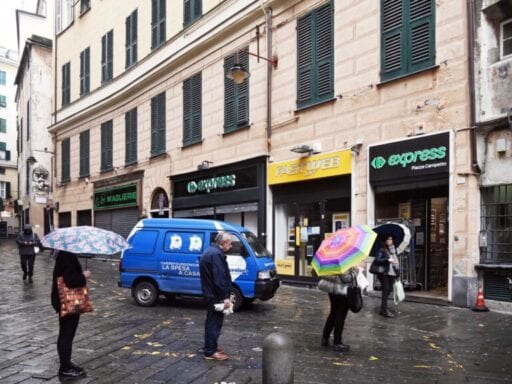 Share
Loading...
People wait outside a supermarket in Genoa, Liguria, on March 13, 2020. Italy has closed all stores except for pharmacies and food shops as the coronavirus outbreak in the country continues. | AFP via Getty Images

What Albert Camus’s “The Plague” can teach us about life in a pandemic.

The main thing about a pandemic like the novel coronavirus is that it doesn’t discriminate.

Whoever you are, wherever you live, you’re vulnerable, at least in principle. While some of us may fare better because of our age or health, the microbes themselves are impartial.

It’s worth pausing to reflect on the implications of that fact. Among other things, it means we’re all in the same boat, for better or worse. But accepting this — really accepting this — seems uniquely difficult in America.

This country is built on a cult of individualism. It’s a myth so deeply ingrained that it’s politically toxic to even question it, as President Barack Obama learned back in 2012 when he committed the crime of stating the obvious:

If you were successful, somebody along the line gave you some help. There was a great teacher somewhere in your life. Somebody helped to create this unbelievable American system that we have that allowed you to thrive. Somebody invested in roads and bridges. If you’ve got a business, you didn’t build that. Somebody else made that happen.

Obama’s remarks became “A Thing” in conservative media and “You didn’t build that” was a popular refrain at the Republican National Convention that year. Obama wasn’t denying that individual effort and talent matter. His point was that we’re all embedded in a broader social system, and our lives are contingent, one way or another, on the work of other people. That an observation so banal could generate so much controversy speaks to how deep the individualist ethos goes.

But the crisis we’re facing now, a rapidly spreading pandemic, explodes this ethos. No one can deal with this threat in a vacuum. Sure, there are steps you can take to protect yourself and your family, but your best efforts are less likely to matter if your neighbors, your community, your government, don’t do their part.

Even if you’re young and healthy, you’ll become a vector for spreading the disease to others if you’re not mindful about what you do or where you go. And if you don’t modify your behaviors and needlessly get sick, you’ll increase the pressure on an already overtaxed health care system and jeopardize the care of someone else who might need it more than you.

Zeynep Tufekci summed it up in a terrific post for Scientific American:

What comes next is unclear. And the pain will not be distributed equally. Many people will lose income due to work stoppages or potential lockdowns. Kids from low-income families will miss meals if schools are canceled; their parents will miss work if they have to stay home to take care of them. Older people and those with health problems are uniquely at risk. And on and on it goes.

Many of us will need help. The simplest — and probably the most important — thing you can do is take precautions like social distancing. That’s the only way to flatten the epidemic curve. As my colleague Kelsey Piper notes, doing so will literally save lives.

If you’re among the less vulnerable, it’s tempting to ignore most of this. Why suffer the inconvenience if the personal risk is low? The only answer is that others are counting on you. And it’s almost certainly true that someone in your life — a parent, a grandparent, a friend with an existing medical condition — is counting on the people in their community to do the same. Because all of us, even the most at risk, will have to venture into the world at some point, and the fewer infected people there are, the safer everyone will be. Halting this virus is a collective task no matter how you look at it.

It’s hard to accept this idea without a vision of civic belonging. We have to care about other people, and they have to care about us. This is the world we’re in for the next several months and everything turns on our willingness to embrace it.

What a pandemic reveals about us

My favorite novel is Albert Camus’s The Plague. It was published in 1947, after World War II.

On the surface, it’s a story about an Algerian coastal town beset by a mysterious plague. But the allegory works on several levels. “It is at the same time a tale about an epidemic, a symbol of Nazi occupation, and, thirdly, the concrete illustration of a metaphysical problem,” Camus wrote.

It’s that last point that’s so relevant now. The “metaphysical problem” is the brute fact of suffering. It’s a problem because there’s no real reason for it. Like the plague, it’s just a thing that happens in the world whether we want it to or not. Camus’s novel asks if we can conceive of suffering not as an individual burden but as a shared experience — and maybe turn it into something affirmative.

The key is to recognize the universality of suffering. A plague is an extraordinary event, and the horror it unleashes is extraordinary, too. But suffering is anything but extraordinary. Every single day you leave the house, something terrible could happen. At any moment, you could get mortally sick. The same is true for everyone you know. All of us are hostages to forces over which we have no control.

A pandemic simply foregrounds what’s already true of our condition. And it forces us to think about our responsibilities to the people around us. One of the reasons I love The Plague is that it draws out the conflict between individual happiness and moral obligation in such vivid fashion. The hero of The Plague is a committed doctor named Rieux. From the very beginning, Rieux devotes himself to resisting the plague and achieving solidarity with its victims. His sense of purpose is wrapped up in struggle and sacrifice demanded by the sickness.

Each character in the story is defined by what they do when the scourge comes. No one escapes it, but those who revolt against it, who reduce the suffering of others, are the most fulfilled. The only villains in The Plague are those who cannot see beyond themselves. The plague, for these people, is either an excuse to flee or an opportunity to exploit. What makes them so awful isn’t their self-interest; it’s what their self-interest undermines. Because they can’t see that their condition is shared, an ethos of solidarity is completely foreign to them. And that blindness makes community — real community — impossible.

A recurring theme of The Plague is that crises have a way of upending the social order. It throws almost everything we take for granted into chaos. And it forces us to attend to the present moment. Nothing else really matters when your day-to-day survival is at stake. There’s just here and now and, as Rieux says, “We’re all involved in it.”

The coronavirus isn’t “The Big One.” It won’t be the end of us. But it will demand the kind of solidarity our individualist ethos denies.

At the very end of The Plague, Camus distills his philosophy in a final passage:

And, indeed, as he listened to the cries of joy rising from the town, Rieux remembered that such joy is always imperiled. He knew what those jubilant crowds did not know but could have learned from books: that the plague bacillus never dies or disappears for good; that it can lie dormant for years and years in furniture and linen-chests; that it bides its time in bedrooms, cellars, trunks, and bookshelves; and that perhaps the day would come when, for the bane and enlightening of men, it would rouse up its rats again and send them forth to die in a happy city.

That last line is critical. The struggle against suffering is never over. The plague will return, and so will everything else that torments human beings. But the point of the book is that a shared struggle is what makes community possible in the first place.

The lesson of The Plague is that we should see ourselves as members of a community, not as atomized actors. And that means when we think of “preparedness,” we’re thinking not just of ourselves but of how our actions will affect other people. It means thinking of risk as more than an individual calculation.

A pandemic, terrible though it is, highlights our mutual interdependence in a way that only tragedy can. The beauty of The Plague is that it asks the reader to map the lessons of the pandemic onto everyday life. The principles that drive the hero, Rieux, are the same principles that make every society worthwhile — empathy, love, and solidarity.

If we learn these lessons now, in a moment of crisis, we’ll all be better off on the other side of it.

These are the Trump associates who’ve pleaded guilty in the Mueller probe
The Senate will hold a public hearing on the Kavanaugh sexual assault accusation
Trump’s latest morning of tweets was off the rails, even by his standards
Lamar Alexander and the power of right-wing political correctness
We’ll soon know the exact air pollution from every power plant in the world. That’s huge.
Will Biden’s $15 minimum wage cost jobs? The evidence, explained.