“This is about Trump”: 2020 GOP primary challengers endorse impeachment in their first debate 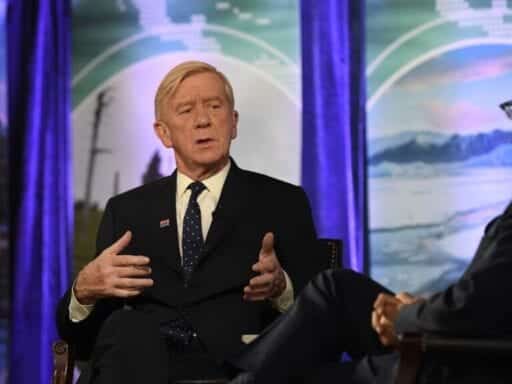 The pro-impeachment push shouldn’t be surprising coming from Weld and Walsh. Neither candidate is running on the basis of specific policy differences with the current president — rather, both are running with the express purpose of defeating not just Trump, but the idea of Trump and his hold on the Republican Party.

“It’s not about issues. It’s about Trump,” Walsh said when asked about his plans for his first days in the Oval Office.

Earlier, he said, “This is about Trump. This is about that guy in the White House,” saying that his focus was not on his debate companion. “I’m not debating Bill Weld. I’ve got all the respect in the world for Bill Weld.” After being asked about Pelosi’s announcement, Walsh said, “He deserves to be impeached and everybody should keep their boots” on Republicans who aren’t supportive of impeachment.

The debate came in the midst of an emerging scandal focused on news that Trump tried to pressure the Ukrainian president into investigating Joe Biden’s son, Hunter, with allegations that Trump may have been willing to withhold military aid from Ukraine in order to make it happen. (To be extremely clear, there is no evidence that either Biden broke any laws.)

Weld, who previously called Trump’s actions with Ukraine “treason” and noted that the penalty for treason is death, didn’t reiterate that call. But he did add that his experiences during the Watergate scandal informed his support for impeachment.

“We simply can’t sit still for this guy, who’s a disgrace to this office,” Weld said, adding that he couldn’t afford to worry about benefiting Democrats in a general election.

The debate was not sanctioned by the Republican National Committee — in fact, the RNC dismantled its debate committee two years ago and did not expect to host any debates of its own, and several states have already cancelled their GOP primaries. But Republican challengers came anyway, focused on proving themselves to be the best person to take on — and take down — Donald Trump in a long-shot primary effort.

Both candidates decried Trump’s administration more broadly, supporting the broad principles behind the administration’s deregulatory efforts and tax cuts, but arguing they went too far and simply weren’t worth the cost to America. They also said that so-called deficit hawks weren’t paying attention during the Trump era. “What do we hear from [former Tea Party colleagues] about the deficit?” Walsh said. “Not a damn thing.”

Weld, who ran for the vice presidency as Gary Johnson’s running mate on the Libertarian Party ticket back in 2016, announced his bid for the White House in April, while Walsh, perhaps best known for his past Trump-fandom and conspiracy-theorizing, announced his own efforts to primary the president in August. Mark Sanford, a former Congress member and South Carolina governor who jumped into the 2020 race earlier this month, declined Business Insider’s invitation to participate in the debate. (Trump was invited but did not respond.)

Weld’s campaign is heavily reliant on his view, as he told me this past summer, that conservative voters are looking for a “normal Republican” they can vote for instead of Trump. During the debate, he told viewers that under a Weld administration, “you’ll never have to be exhausted by the government again.”

A Ukrainian comedian-turned-president is embroiled in Trump’s impeachment mess
The Putin paradox: he’s brutally repressive — and incredibly popular
Americans want a woman to take down Trump. Just not in the election.
The fight over Sesame Street’s Bert and Ernie as a gay couple, explained
Will the coronavirus drive down housing prices? This real estate broker says no.
One Good Thing: Housebound is the perfect horror comedy for the perpetually quarantined