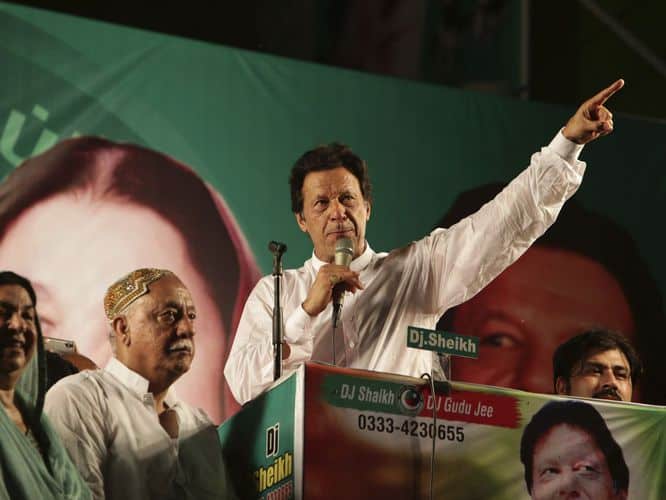 Khan is reportedly backed by Pakistan’s military, which has been accused of intimidating candidates from the competing party.

Former cricket star turned politician Imran Khan has declared his party the winner of Pakistan’s national election. The results aren’t official yet, though, and dozens of rival candidates are saying the election was rigged.

Khan’s PTI party is reportedly backed by the country’s powerful military, which has been accused of intimidating candidates from the competing party and censoring major news outlets.

The election, which took place on July 25, has also been marred by violence: Several attacks killed hundreds at campaign rallies in the weeks leading up to election day, and a bombing near a polling station on Wednesday left 31 people dead.

As of Thursday morning, several networks reported that Khan’s party was leading the polls by a substantial margin, and is expected to win a majority in Pakistan’s lower house, the National Assembly. Whichever party wins a majority in the assembly will form a government and then appoint a prime minister.

But as the vote counts started to pour in, the incumbent PML-N party strongly objected to the results.

“This is clear rigging, and we do not accept these results,” Shahbaz Sharif said at a press conference in the northeastern city of Lahore on Thursday. “We will not tolerate this, and the people will use everything in their power to regain their rights.”

The military has long wielded influence over Pakistan’s political system

Since Pakistan’s independence, the country’s armed forces have staged multiple coups to successfully overthrow the government, and analysts believe they likely had a hand in directing the outcome of this election as well.

“They’ve been trying to intimidate people from Nawaz Sharif’s party in particular, to try to switch over to either Imran Khan’s party or to declare their candidacy as independents,” Madiha Afzal, a nonresident fellow at the Brookings Institution, told me.

The military has denied these claims, and an armed forces spokesperson called the interference allegations “malicious propaganda” on Twitter.

After a series of attacks leading up to the election left hundreds dead, Pakistani citizens called for heightened security measures. On election day, the military deployed 371,000 soldiers to help guard the elections. Some people think it was a necessary precaution, while others saw it as a way for the country’s armed forces to assert their control.

It’s also widely believed that the military was responsible for ousting the last prime minister, Nawaz Sharif, the brother of Shahbaz Sharif and previously the leader of the PML-N party. Nawaz Sharif often feuded with the armed forces, and was ultimately disqualified from office by Pakistan’s Supreme Court on corruption allegations in July 2017.

“We will use all political and legal options for redressal of these glaring excesses. This is an outright rigging and the results based on massive rigging will cause irreparable damage to the country,” Sharif tweeted.