“This is madness”: A rescue diver on what it was like to save the Thai boys in the cave 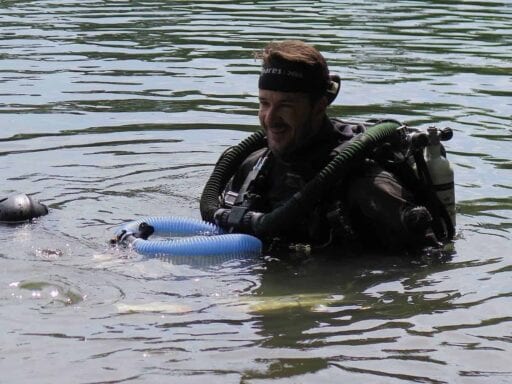 The divers searching for the boys almost gave up. Then, they had a near-perfect rescue mission.

The story of the 12 Thai soccer players and their coach who had to be rescued from a flooded cave in northern Thailand by more than a dozen international divers and Thai Navy SEALs has enthralled the world for the past 10 days.

Though a mission to bring them out through the cave at first seemed impossible, rescuers eventually came up with a scheme that involved fitting the boys with dive masks, and wrapping them on stretchers to transport them out of the cave safely.

“We are not sure if this is a miracle, a science, or what. All the thirteen Wild Boars are now out of the cave,” the Thai Navy SEALs said on their Facebook page on Tuesday after the mission was complete. The boys are currently in recovery at the Chiang Rai Prachanukroh hospital, where some are being treated for mild pneumonia.

The initial search mission to find the boys after they went missing on June 23 was almost called off because the flooded cave was so dangerous to navigate. But then the boys and their coach were found on July 2 some 2.5 miles from the cave’s mouth by a pair of British divers.

The larger search team consisted of Thai Navy SEALs and several international divers, including Ben Reymenants, 45, a Belgian who owns a diving company in Phuket, Thailand.

Reymenants’s search dives helped lay the groundwork for the rescue, and he was closely involved with the entire mission. Vox spoke to him about what it was like in the watery labyrinth with 13 lives at stake.

This conversation has been edited for length and clarity.

When did you get called in to help look for the missing boys, and can you describe the first few days of the search?

We saw on the news that the kids were missing, and then I saw that the British cave rescue group had already come to the site, so I’m like, “Okay, these guys are experienced, they’re in good hands.”

But they were helped by the Royal Thai Navy SEALs, who had less cave experience. So a friend of mine who deals with these guys says, “Hey, they’re going to need support. Can you please come over and advise these guys how to actually move through these caves and fix the lines?”

Of course, I didn’t think twice. Twelve boys with their whole lives in front of them. But then when I arrived, the British cave divers had just come out the cave and they were like, “This is madness.”

When I arrived, the entrance looked like the Colorado River, but with mud and with zero visibility, so it was really pulling hand over hand.

There was this really strong outflow, and at the beginning we were advancing about maybe 100 meters a day in zero visibility, fighting the current. And then there are parts where you have to climb up, dragging all your tanks.

I turned around from one unsuccessful dive, and I took out my line and came back and I met the British who were on their way in. And then we decided, “We have to call it off, because it’s not going to happen. People will die, and we don’t even know if these kids are alive.”

We told the Navy commander. And he says, “Yes, but these are kids from Thailand. I can’t face the public and say ‘we’re calling it off.’”

So he said, “I’m going to send in my Navy SEALs and we’re going to try.”

Then on the third day, the [visibility improved] and the current was less strong. The Navy Seals had come back unsuccessfully; they had swum in circles and couldn’t find the passage. The British cave divers had already said, “We’re going home.”

I managed to push 200 meters of line. And they said, “Let’s work in teams, laying line.” While one team was sleeping, the other continued, so round-the-clock. And we started advancing fast because the rain had stopped, the vis got better, the flow got less, and then we actually went really fast through the cave.

These were still dives of six to eight hours. Very, very tiring.

So how was it actually finding them?

The difficult part was to find this T-junction [a narrow part of the cave with a very sharp turn, beyond which was the tunnel that eventually led to the boys]. We got stuck a few times, we freaked out.

And then [our team] found the T-junction, laid another 400 meters of line in the right direction, and then I think we stopped literally not even half a kilometer from the room where we thought they were, and we ran out of line,

So we had to turn around. It was very frustrating.

When we came out, the British cave divers were just coming in, and we were like, “You probably can find them. We think it’s just another 400 to 800 meters.” And so they went in right after us, and three hours later, they surfaced in the room where the kids were. You’ve probably seen the footage.

I couldn’t believe it. Especially that there were all 13, alive and nobody injured, and their mental status as well, they were all like, “Hey, oh, we’re so happy, What day is it?” Remarkable.

So how did the decision-making process go for the rescue?

Obviously the whole world … had solutions; you have no idea the messages that I got. I pushed away a phone call, and they kept calling me and they said, “It’s the offices of Elon Musk,” and I said, “Right, is Barack Obama gonna call me next?”

But they said, “No, check your email, it’s actually us,” and it was (someone)@spaceX and I said, “Oh shit, I’m so sorry.” And they said, “We have all these solutions.”

One of the [rescue team’s] options was actually to teach them how to dive. But this is already pretty hard for experienced cave divers. See, the risk is if the boys panic and they pull off the mask, they drown. It’s a mile in; there’s no chance for survival.

And they were so skinny and so weak, there was no way they could have walked over all of this. So we decided to put them on a stretcher, with a full face mask, with pure oxygen on a positive pressure.

And it was quite chilly, so although they were put in wetsuits, their metabolism was so low that they were half-asleep, half-unconscious when they were brought out. So they were put immediately in quarantine and medical care. [Some reports have also claimed that the kids were sedated for the journey.]

And they’re all in good health and it’s amazing. And what I heard was that the coach did long meditation sessions [before leaving the cave] so they could calm down.

How did the divers maneuver the stretchers through the narrowest parts of the cave?

The smallest space was actually 2 feet wide, so yes, it was quite high, 60 centimeters high. And these kids are quite skinny and strapped to a stretcher.

The kids had to be literally pulled and dragged through that part. That’s also why they decided to strap them in and cover their face with a full face mask, so just in case they would panic or whatever. It’s not easy.

It was still a good two hours per kid.

How did it end up being so much shorter than the initial dives?

By now, we knew the cave. In the beginning, we were literally looking and searching and fighting current. But now, with all the teams, by the time one team carried the stretcher about 100 meters, they got tired and could hand it over to the next team. So that’s why. It was very efficient.

Also from Camp 3, rock climbers had actually installed hooks in the roof and made a sort of cable zip line where you could attach the stretchers. It was initially installed there to haul more than 500 tanks into the cave. And the stretchers were clipped on there — they’re very light kids — and that made them come out very quickly.

But it was still only four kids a day.

How long have you been cave diving? And what drew you to it?

I’ve been diving unofficially for about 20 years, and I became a cave instructor roughly 10 years ago. Not even 10 percent of the submerged caves on the planet have been explored. So it’s really the last frontier for mankind because no machines or animals can go in there. Only humans that are trained can go to that extent, which makes it extra special.

How often do these kinds of cave rescues happen and how does this one compare to others?

Luckily these cave rescues happen rarely because a lot of countries have actually put policies in place that prevent non-trained cave divers from going inside caves.

This cave … is only visited when it’s the dry season; when it’s completely dry, people walk in there. It’s a very long cave—it’s about [5.5 miles] long.

When it’s flooded, nobody dives. There are no lines. Normally, dive caves have a full set of lines and arrows to point to the exit and safety markers in place, but this one had nothing. So it was really finding your way through with a pretty basic map.

I’ve heard this will be turned into two movies.

Oh, you have no idea how many requests. Discovery, National Geographic.

The four crucial questions Jeff Bezos needs to answer about his $10 billion climate pledge
The best $141 I ever spent: A skateboard
How Netflix’s Unbelievable turns a true story about rape into a must-watch TV
North Korea kept long-range missiles out of its military parade. It could be a good sign for nuclear...
The catastrophic police failure at the US Capitol, explained
Michael Bloomberg is probably definitely going to run for president