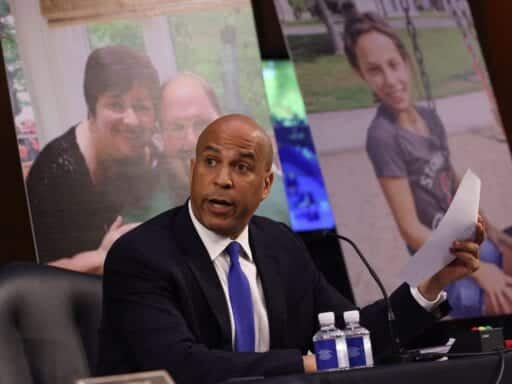 Share
Loading...
With photographs of people behind him who would be impacted by the elimination of the Affordable Health Care Act Sen. Cory Booker (D-NJ) speaks during the Senate Judiciary Committee confirmation hearing for Supreme Court nominee Judge Amy Coney Barrett on Capitol Hill on October 12, 2020, in Washington, DC.  | Win McNamee/Getty Images

Booker highlighted the many problems with Republicans’ handling of the nomination.

In his opening statement, Booker directly called out Senate Republicans’ attempts to rush through her confirmation less than 30 days ahead of the general election, after refusing to hold hearings for President Barack Obama’s nominee in 2016. He noted, too, how the Senate is focusing on a Supreme Court nominee even as millions of Americans are in need of more coronavirus stimulus money, which Republicans in the upper chamber have been chief opponents toward. And he questioned Republicans’ decision to hold the hearing despite two members of the committee testing positive for the coronavirus about a week and a half ago.

“Nothing about this is normal,” said Booker. “It is not normal that Senate Republicans are rushing through a confirmation hearing, violating their own statements and betraying the trust of the American people and their colleagues, and failing to take in this hearing even the most basic safety protections for the people around them.”

Booker also emphasized that the fears Americans continue to have about the pandemic are “not normal” and the result of the administration’s poor handling of its efforts to combat the coronavirus:

In America today, people are scared. … Many Americans have died, isolated and — and alone, tens of millions of jobs have been lost. One in three American families with children are not getting enough food to eat. More than 100,000 small businesses have closed permanently. Lines of food banks in the wealthiest nations on the planet have stretched for miles. We should be working in a bipartisan way to try and get the virus under control, to get relief for people who are hurting, struggling, and afraid, to help people who are unemployed, to let doctors and nurses and hospital staff putting their lives on the line right now in state after state when Covid is rising know that we have their back on the pandemic. Instead of doing anything to help people who are struggling right now, we are here.

Progressive activists are among those who have long pushed Democrats to take a stand on the legitimacy of the nomination and draw attention to how Republicans are using this opportunity to mount yet another power grab. Although Democrats did not take action in the form of a protest or boycott on Monday, Booker’s and other lawmakers’ statements strove to point out how Republicans are applying a different standard to Barrett’s nomination.

Democrats also focused extensively Monday on the threat that Barrett’s confirmation could pose to the Affordable Care Act, which is the focus of an upcoming Supreme Court case — in addition to questioning the timing of the nomination.

How the GM workers strike makes Bernie Sanders’s case for Medicare-for-all
Sotheby’s is selling a piece of web history, signed by its creator
Andrew Yang will be the only candidate of color on stage in the Democratic debate
The internet is getting less free
Vox Sentences: Black churches are burning
Why the Iowa results are taking so long