This is worse than the crucifixion of Christ, and other GOP impeachment defenses 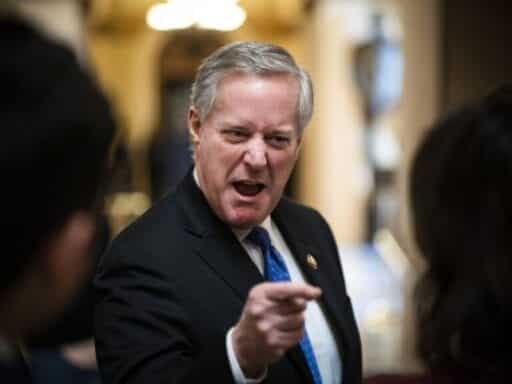 A sampling what Trump’s allies in the House had to say before the vote.

Republican Rep. Steve King of Iowa, for example, claimed Trump couldn’t have been out for personal political gain when he asked the president of Ukraine to investigate Joe Biden because Biden is taking part in a presidential primary, and thus is not a “campaign rival.”

Rep. Mike Kelly of Pennsylvania blamed the Democratic-led inquiry on the Democrats’ blinding hatred of the president and likened the vote to the bombing on Pearl Harbor that led the US to enter World War II.

Other Republicans questioned the impeachment process itself, calling it unfair — perhaps even more unfair than the trials of Jesus Christ.

At their heart, these Republican defenses aren’t about what Trump did or didn’t do. Instead, they’re a series of complaints about process and politics designed to convince his supporters that the saga isn’t about investigating Trump, but about insulting them.

A recurring argument Republicans have made over the last few months is the notion that Trump has been denied his right to face his accusers in person, rendering the entire process illegitimate. Sen. Rand Paul wrote in an op-ed for the Hill that “the Sixth Amendment guarantees the right to confront one’s accusers,” therefore Trump “must both face his accuser and face questions regarding his own knowledge and activities.”

Legally, that’s not true. The impeachment process in the House is not a trial, and as conservative legal scholar Andrew McCarthy noted, “The Sixth Amendment has nothing to do with impeachment, and it does not advance a claim that the ‘whistleblower’ should be outed and questioned.”

And moreover, the House resolution on the impeachment process explicitly stipulated that Trump and his attorneys could participate in the proceedings, including their ability to make their case and offer evidence, request documents, cross-examine witnesses, and object to testimony. The White House refused to do so.

But some members of Congress appeared unaware that Trump had, in fact, been given the ability to participate in his own impeachment inquiry, and instead argued that Trump had been unable to face his accuser, which rendered the entire event moot.

Two Republicans seemed to compare Trump’s impeachment to the capture, trial, and ultimate crucifixion of Jesus Christ. Rep. Barry Loudermilk (R-GA) said, “Pontius Pilate afforded more rights to Jesus than the Democrats have afforded this president in this process.”

BARRY LOUDERMILK: “When Jesus was falsely accused of treason, Pontius Pilate gave Jesus the opportunity to face his accusers. During that sham trial, Pontius Pilate afforded more rights to Jesus than the Democrats have afforded this president in this process.” pic.twitter.com/PrCcGZ3gDK

And Rep. Fred Keller (R-PA) quoted Jesus on the cross as he’s portrayed in the Gospel of Luke, saying that he was praying for Democrats: “From the gospel of Luke, the 23rd chapter, verse 34: ‘And Jesus said, ‘Father, forgive them, for they know not what they do.’”

“From the gospel of Luke, the 23rd chapter, verse 34: ‘And Jesus said, “father, forgive them for they know not what they do,”‘” Keller says from the floor. #impeachment

“They hate the president”

Rep. Chris Stewart (R-Utah) made a different argument in defense of the president and against impeachment, one that’s been made by a number of conservatives: that the fight over impeachment is actually an attack aimed at supporters of the president three years in the making.

In his remarks, Stewart said:

This vote, this day, has nothing to do with Ukraine. It has nothing to do with abuse of power. It has nothing to do with obstruction of Congress. This day is about one thing and one thing only. They hate this president. They hate those of us who voted for him. They think we are stupid. They think we made a mistake. They think Hillary Clinton should be the president and they want to fix that. That’s what this vote is about. They want to take away my vote and throw it in the trash. They want to take away my president and delegitimatize him so can he not be reelected. That’s what this is about. For those who think this started with this investigation, what nonsense. … You have been trying to impeach this president since before he was sworn into office.

Stewart wasn’t alone in arguing that impeachment was a long-running effort aimed squarely not at Trump, but at those who voted for him. Rep. Bill Johnson (R-Ohio) went so far as to hold a moment of silence for Americans who voted for Trump in 2016, while Rep. Clay Higgins (R-LA) used a map of counties Trump won while arguing that “weaponized impeachment” was brought about by socialists.

It should be noted that several Republicans voiced support for impeaching Hillary Clinton before the 2016 presidential election even took place. But moreover, many Republican members of Congress seem to take seriously the idea that there is a synonymity of Trump and Trump’s voters — that attacks on Trump are attacks on the millions of Americans who voted for him.

I wrote about this before in an article about why conservatives weren’t rallying behind the concept of a President Mike Pence. In short, some voters seem to see aspects of themselves in a president they view as willing to fight on their behalf.

While Trump might be, in their view, uncouth, unfair, even immoral and a hindrance to the growth of the conservative movement, they view the left as the real threat, a threat only Trump has seemed able to stand up against.

And to many Trump-supportive conservatives, the impulse to fight on Trump’s behalf against his critics on the left and in the media is intimately tied to their own sense that they themselves are constantly targeted in unfair ways by those same forces.

Ben Shapiro, the popular podcast and radio host, told me, “People feel that no honest standard has been applied to conservatives, and they feel that Trump has been targeted just as they have.”

Those voters have real sway with Republicans in Congress. So while some Republicans might believe that Trump’s conduct was wrong, perhaps even impeachable, they won’t say so in front of those voters who will decide their own reelection.

Genetics has learned a ton — mostly about white people. That’s a problem.
The convenience of American amnesia
A 7.0 earthquake struck near Greece and Turkey, killing at least 14 and injuring hundreds
Immigrants at a detention center in Georgia were allegedly subjected to hysterectomies
30 million Americans have lost their jobs in 6 weeks
Sorry, you can’t wear a Biden shirt or MAGA hat when you vote