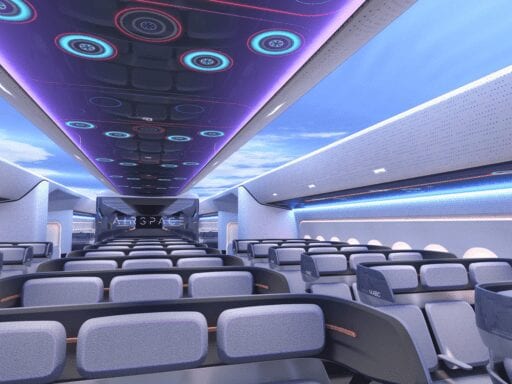 It’ll also let you know how long the bathroom line is.

Travelers know there is very little privacy when it comes to air travel. Before passengers are even allowed to board an aircraft, they have to shed their jackets, take off their shoes, and walk through an X-ray contraption that scans their entire bodies. As flyers settle into their (usually rigid and uncomfortable) seats, the active surveillance seems to end there. But in a few years, Airbus’s latest “connected cabin” aircraft experience might change that.

The innovation, which was revealed in September, will let flight attendants survey the cabin more closely by employing sensors in the lavatory and cabin, Time reported.

Yes, that means that flight attendants on an Airbus can technically track how long a passenger has been in the bathroom or whether a seatbelt is fastened.

An Airbus is a type of commercial aircraft manufactured by a European aerospace company. Currently, the Airbus 380 is the largest passenger airliner on the market, used by Singapore Airlines and British Airways; smaller models are also flown by American and Delta Airlines.

Airbus will allow airlines to purchase cameras situated outside bathrooms to count how many passengers are in line — thereby broadcasting the wait time to the cabin and collecting that data for airlines’ customer needs. And as creepy as these surveillance tactics may seem, aircraft carriers see this less as an invasion of privacy and more of an optimization strategy to improve the experience onboard.

United and Delta were met with major consumer backlash in February after admitting that their premium economy screens have cameras, BuzzFeed News reported. The cameras were included by Panasonic, which manufactured the entertainment screens, and were intended for features like video conferencing. Airlines say the cameras were inactive but travelers were still upset that they weren’t disclosed.

The connected cabin experience, Airbus writes in its press materials, aims to give guests a more personalized travel experience. For airlines, this means being more efficient — in boarding flyers and anticipating their in-cabin needs — simply by having more data.

The aviation industry is currently in a good place years after the Great Recession; people are purchasing plane tickets again and there’s a global demand for more pilots to accommodate a growing number of travelers. The big four airlines have consolidated to control more than 80 percent of the American passenger market, but even with fewer choices — especially in the age of social media — customers are less willing to tolerate poor service.

Airlines are now faced with the prospect of optimization for the sake of passenger convenience and their own efficiency. Even while optimizing, airlines still gravitate toward low-cost practices: adding more seats into economy or removing travel bundles so flyers see a cheap base fee but get charged for additional services.

The data that the new Airbus aircraft would provide is valuable to airlines; it ultimately can be used to squeeze more profit out of operations, according to Time: “The connectivity Airbus envisions for its cabins will provide an enormous trove of information airlines can use to analyze and optimize in their never-ending quest for cost efficiencies.”

In November, Delta unveiled the first biometric terminal in the US in partnership with Customs and Borders Protection, which allows customers flying direct to an international destination on specific airlines to use facial recognition technology to get up to their gate. Critics of this technology are concerned about privacy, racial bias, and how the screening algorithm actually works, The Verge reported last October.

“We’re removing the need for a customer checking a bag to present their passport up to four times per departure,” said Delta’s chief operating officer, Gil West, in a press release.

Airlines and airports are relying on artificial intelligence to solve problems that have frustrated passengers and the industry for decades, writes Devin Liddell, a futurist at the design and innovation firm Teague, in Fast Company. Liddell believes AI-powered technology can help people become better passengers, by coordinating more efficient boarding routines and making a seamless move from air travel to ground transportation.

Granted, this is all very futuristic (Liddell is a futurist), but it’s impossible to ignore how artificial intelligence and increased data collection will soon be an expected and routine part of air travel. Airbus’s connected cabin experience is so far the first innovation, and it allows for pretty innocuous observations: things like seatbelt signaling and sensors for when the bathroom soap and toilet paper are running low. Travelers might never again have to wonder how long the dreaded bathroom line is, but privacy — or the prospect thereof — might soon be a concept of the past.