This nurse is treating the sickest coronavirus patients. Trump still wants to deport him. 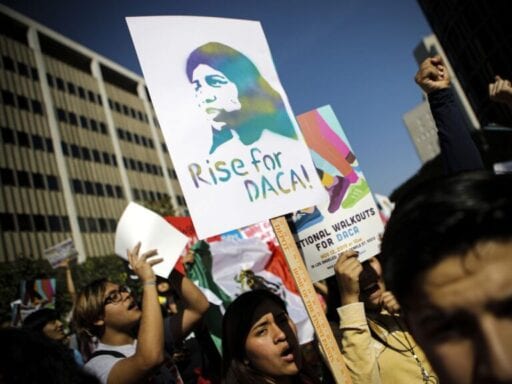 Share
Loading...
Students and supporters rally in support of DACA recipients as the Supreme Court hears arguments in the DACA case in Los Angeles, California, on November 12, 2019. | Mario Tama/Getty Images

He’s one of thousands of DACA recipients who could imminently lose their status.

As a registered nurse treating coronavirus patients in a northern New Jersey ICU, Daniel spends his days working with some of the sickest patients in a coronavirus hot spot. His hospital, like many, doesn’t have enough masks, gloves, and gowns for all of its employees, and his colleagues are getting sick. He’s terrified of infecting his parents, who live with him in a small apartment.

There’s also another constant worry: Depending on how the Supreme Court rules in an immigration case in the coming months, he could lose his ability to work in the United States and become vulnerable to deportation.

Originally from Korea, Daniel, 32, is one of more than 700,000 DREAMers — immigrants who came to the US without authorization as children. The only reason he can contribute to the coronavirus response at all is because of the Obama-era Deferred Action for Childhood Arrivals program, which has protected him from deportation and allowed him to study and work in the US since it was created in 2012.

President Donald Trump, who has claimed that many DACA recipients are “far from angels,” is fighting to dismantle the program before the Supreme Court, which will issue its decision before the term ends in June. If the justices rule in Trump’s favor, the administration has been clear that not only will it end the program, but DACA recipients, once their protections expire, will be eligible for deportation, just like any other unauthorized immigrant. Immigrant rights advocates have consequently pleaded with the justices to at least delay their decision amid the coronavirus crisis.

Daniel hasn’t told many of his coworkers about his immigration status. (He asked to be identified by only his first name out of fear of losing his job.) Only his close friends know that he is a DACA recipient. Many of the doctors and nurses working alongside him in the intensive care unit wouldn’t understand his predicament, he said: They are Trump supporters.

“They always talk about illegal immigrants taking all the benefits, but at the same time, they don’t know I’m also considered undocumented — illegal,” he said.

Daniel said he worries about his status and what might happen at the Supreme Court all the time — not just for his own sake but for his parents, whom he supports financially.

What’s more, there’s a nursing shortage nationwide and at his hospital, where the majority of patients in the ICU have Covid-19, the disease caused by the coronavirus.

“In this time of crisis, if people like myself, or any health care professional, lose their jobs, it can really negatively impact the nation’s population,” he said.

“A prison without bars”

Daniel arrived in the US in 1999, when he was 11, after his parents decided to start anew amid a crippling economic crisis in Korea and settled in New Jersey, where he attended middle school and high school.

His grandfather, who had previously served on a US military base in Korea, and his grandmother had immigrated to the US in the early 1990s and become naturalized citizens. But Daniel’s parents were never able to get green cards.

“It always gives me anxiety thinking about my situation”

He didn’t know he lacked legal status until he finished high school in 2006: His friends went off to college and started driving and working, but in New Jersey, he needed a Social Security number to qualify for in-state tuition and financial aid, and he didn’t have one.

“At that time, I felt like I was in a prison without any bars,” he said.

He was diagnosed with clinical depression and, for years, was just trying to figure out what to do with his life. That changed in 2012, when then-President Barack Obama issued the executive order creating the DACA program.

Through the program, Daniel obtained protection from deportation and started working in retail while taking the prerequisite courses for nursing school. It took him several years to get in, but he eventually graduated, going on to receive a scholarship for his bachelor’s degree and to attend the master’s program he’s enrolled in now, in which he is studying to become a nurse practitioner while also working at the hospital full-time.

His status is valid through 2022, though it’s not clear whether he’ll be able to maintain that status if the Supreme Court strikes down the program. That puts him in a better position than some other DACA recipients, who may have to renew their status during the pandemic. But even though he has a valid work permit in hand, Daniel also knows that the Supreme Court could put an end to his career at any time.

“It always gives me anxiety thinking about my situation,” he said.

Health concerns and bills to pay

Daniel became a nurse because he loves helping people, he said, and he knew it would allow him, as an only child, to support his parents as they age.

But right now, he said, he would stop working, if he could afford to.

If he were living alone, he said, he wouldn’t have qualms about continuing to work on the front lines in the fight against coronavirus. But he’s sharing his small apartment with his parents, who are likely vulnerable to complications from the virus due to their age.

“I live in a small apartment, so I cannot avoid my parents,” he said. “I try not to expose them, but I have no choice. If I could, I would not work for a while, but I have to pay the bills.”

At the very least, they have a separate bedroom. But there’s only so much he can do to self-quarantine when he’s in living in close proximity to them and keep from contracting the virus when he’s at work — like many other hospitals nationwide, his is facing a shortage of personal protective equipment, including face masks and gowns.

He has very likely been exposed. He works with coronavirus patients daily, administering medication, monitoring vital signs, and working with their physicians. He wears personal protective equipment, but he only gets one set for an entire shift.

He finally got tested for the virus last week after he started to show some possible symptoms and the results came back negative. But there’s no guarantee that he will continue to stay free of infection — one of the nurses he works with tested positive. Since carriers of Covid-19 can be asymptomatic, he could spread the disease unknowingly to his parents and to his patients.

His parents also lack legal status. If they were to get sick, Daniel says, he’s worried not only about their health but about affording their medical care. Daniel has health insurance through his wife’s employer, but his parents are uninsured. His mother, who works in customer service, was furloughed on account of the pandemic. Since his parents are unauthorized immigrants, they can’t get health insurance through the Affordable Care Act insurance markets, even though they pay taxes.

Nor are they eligible for any of the financial relief in the $2 trillion coronavirus relief that Trump signed last week, including unemployment benefits and up to $1,200 in stimulus checks.

DREAMers working in health care are in limbo

About 27,000 DREAMers are in the same position as Daniel: frontline medical workers during the coronavirus, according to the Center for American Progress, a liberal think tank.

Immigrant advocates have pleaded with the justices to at least delay their decision on DACA amid the current crisis, if not rule to keep the program alive entirely, given the dire impact it could have on immigrant communities and the health sector.

For DACA recipients trying to renew their status for another two years during the pandemic, the administration has made accommodations to continue processing applications while US Citizenship and Immigration Services offices are closed, including waiving a biometrics data requirement. But Democrats, including Colorado Gov. Jared Polis, have consequently urged the administration to go a step further in automatically extending DACA status during the pandemic since not all of them may have access to adequate information and legal assistance.

“In this time of crisis, if people like myself, or any health care professional, lose their jobs, it can really negatively impact the nation’s population”

Daniel married a US citizen who also works in medicine for the Department of Veterans Affairs and is petitioning for a green card through her. But even with the aid of a nonprofit legal aid group, the process has proved difficult. Because Daniel’s parents brought him to the US without authorization and he applied for DACA after he turned 18, he faces additional roadblocks. (The process is more straightforward for DACA recipients who overstayed their visas and who applied when they were under 18.)

Daniel may be able to get a travel permit that would allow him to go back to Korea, return to the US to be legally admitted, and then apply for his marriage-based green card in the US. But going back to Korea carries its own complications: Men of his age face up to almost two years of compulsory military service.

If he can’t get a travel permit, he may now have to leave the US to apply for a green card at a US embassy or consulate abroad and, absent a waiver, wait years before he can come back.

For now, though, he pushes ahead — for his parents’ sake, and his patients’.

“I want people to know that nurses and doctors are working the best they can,” he said.

Centrist Democrats are crucial to building the left’s power in the Midwest
Advice columnist E. Jean Carroll says Trump sexually assaulted her
How voting by mail could save the US election
The New York Times is the latest news outlet to end its Spanish-language coverage
Biden’s Covid-19 stimulus plan includes $40 billion for child care
Tropical Storm Dorian: what we know about its path and its impact on Puerto Rico