This painting explains a surprising amount about about your political views 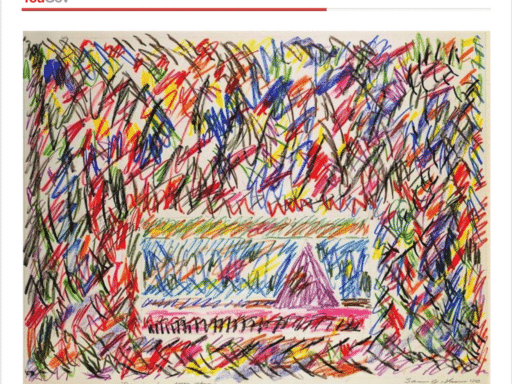 The link between modern art and modern politics.

Simple polling reveals Americans’ views of President Donald Trump are split by variables like race, ethnicity, age, and increasingly by whether or not you earned a college degree.

Some other more unusual questions also reveal strong correlations, and those correlations may do more to reveal what’s really going on than basic demographic questions.

Consider, for example, Sam Gilliam’s 1980 painting “Coffee Thyme.” Data for Progress, a progressive think tank, partnered with YouGov Blue in a recent poll that showed this image (without any further identifying information) to respondents and asked them whether or not they consider it art.

The Coffee Thyme Gap is actually larger than the college degree gap, which is one of the biggest and most widely discussed predictors of Trump support. And there’s reason to believe the bachelor’s degree serves as an imperfect proxy for underlying psychological attributes that are better captured by asking about art.

Approval of Trump is, of course, correlated more tightly with partisanship than with any demographic variable. But Republicans who think “Coffee Thyme” is art are somewhat less likely than skeptics to approve of Trump, and among independents there is a very noticeable Coffee Thyme Gap.

That corresponds to a significant gap in overall approval that’s bigger than the education divide. Among people who think “Coffee Thyme” is art, Trump approval is at 36 percent, whereas among college graduates he’s at 45 percent.

Now, every once in a while a totally meaningless correlation will pop up by coincidence, and without more polling you can’t exclude the possibility that that’s what’s going on here. But the poll was an effort to test a hypothesis about the relationship between art, psychology, and political ideology that’s been well developed in academic surveys but not so prominent in basic political polling.

Modern politics is driven by “openness to experience”

This is, of course, just one poll and just one painting. To really draw any strong conclusions about the connection between modern art and partisan politics, you’d want to do repeated surveys with a range of different examples.

But while the “Coffee Thyme” result might seem novel to a lay person, it wasn’t unexpected to the people who put the poll together. That’s because it’s in line with a well-known finding in political psychology that people who score high in a personality attribute known as “openness to experience” tend to have more left-wing political opinions (see Will Wilkinson’s overview for the Economist or Chris Mooney’s for the Washington Post). And while of course partisan politics differs from country to country, the link between openness and left-wing views pops up in studies of lots of places including Poland and Belgium as well as the UK along with the United States.

Indeed, this link between personality and politics is arguably why almost everyone (including the people directly involved) intuitively sees a kinship between Donald Trump and Brexit enthusiasts, even though the policy issues in play are different.

Another thing that correlates with openness to experience is educational attainment. High-openness people have higher IQs, so they tend to do better in school. And high-openness people are more interested in school, especially the less practical aspects of it, so they’re more motivated to earn degrees.

In other words, the political correlation between college degrees and disliking Trump is probably mediated by underlying personality differences. As an intuitive example, take my father. He’s an older white man who’s economically comfortable and has no college degree, which in broad demographic terms sounds like a hard-core Trump fan. But when I tell you he’s a novelist who lives on the Upper West Side with his wife, who is also a novelist, a very different picture emerges. People with artistic temperaments are prototypically “high openness,” and it’s no surprise at all that my dad hates Trump.

The problem, of course, is that pollsters can’t really give people elaborate personality tests on surveys. Questions about educational attainment are much easier to ask. And unlike taste in art, the Census Bureau tracks educational attainment, so it’s easy to say that Minnesota has a larger share of college graduates than Wisconsin but difficult to quantify how open to experience Minnesotans are compared to Wisconsinites.

But it really would be in candidates’ interest to directly target personality rather than broad demographic correlates of personality. And it would be interesting for everyday pollsters to do more work with personality alongside their various normal questions. What’s cool about the “Coffee Thyme” test is — at least through one run — it seems to be pretty powerful despite its simplicity.

Papa John’s founder resigns as chairman after using a racial slur on a call
Top 2020 candidates will be stuck in Washington because of the impeachment trial
Hand sanitizer was one of the most sought-after products on the market, even before the coronavirus ...
Trump’s Afghanistan peace deal just hit its first major obstacle
7 reasons Trump can’t make an immigration deal
The state of ex-felons’ voting rights, explained