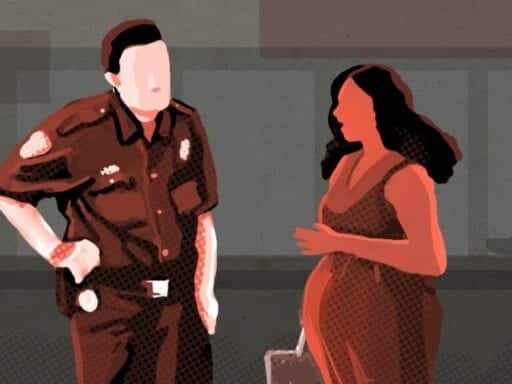 A back-to-school trip to Staples turned into an ordeal for Sherell Bates.

Sherell Bates was 34 weeks pregnant with twins when she went back-to-school shopping at a North Carolina Staples on Friday. She ended up having to expose her belly to a police officer, who thought the bump under her shirt was stolen goods.

Bates was trying to pay for notebooks and other school supplies for her two older children at the Staples in Pineville, North Carolina, when she was pulled aside by an officer monitoring the store, reports Stephanie Tinoco of WSOC. The officer asked Bates what was under her shirt. Her response: “Twins.”

The officer didn’t believe her, Bates said. So she lifted her shirt to show him her belly, “so he could see that I’m just a regular pregnant person buying school supplies,” she told Tinoco.

The episode is one in a long string of recent highly publicized incidents in which black customers at retail stores around the country have been suspected of theft when they were simply trying to shop. For Bates, the experience of shopping while pregnant with twins was stressful enough without being accused of faking her pregnancy to steal school supplies.

Discrimination against black shoppers is widespread

Staples issued a statement about the incident, saying that, “while a customer was shopping, a manager mistakenly thought they were possibly shoplifting and asked a police officer that happened to be in the store to talk with the customer.”

“After a quick conversation,” the statement continued, “the issue was resolved, the manager apologized to the customer and refunded their transaction due to the inconvenience.”

But Bates says she is considering legal action.

Her ordeal is one of several recent incidents in which black customers have been questioned by police — or worse — while merely going about their business. In April, two black men were arrested and removed from a Philadelphia Starbucks where they were waiting for a business associate. In May, a black woman was searched at a San Jose, California, Macy’s when an employee suspected her of stealing cologne. She said a saleswoman told her “people like you have been stealing from Macy’s, stealing stuff.” Also in May, three black teenagers were questioned by police on suspicion of shoplifting at a St. Louis-area Nordstrom Rack, where they were shopping for prom.

Researchers have begun to examine the phenomenon of “shopping while black.” A 2009 study, for instance, found that white salespeople were more suspicious of black customers who asked to have a security tag removed from an item — the employees were especially suspicious of black men.

“The cumulative effects of retail discrimination can take a heavy psychological toll on Black shoppers, who must always remain hypervigilant when shopping at high-end retail stores,” the study’s authors write. “In addition to the psychological effects, racism-related stress (e.g., retail discrimination) has been found to increase physiological stress, which is a risk factor for cardiovascular disease in Black women.”

African Americans have an estimated buying power of $1.2 trillion, Nadra Nittle noted at Racked, and many are deciding to spend their money online rather than in physical stores thanks to the discrimination they face. In a 2015 poll, black Americans were more likely to report unfair treatment at a restaurant or store than in interactions with police. That’s probably because shopping and dining out are such common, inescapable parts of life, management professor Stephanie Creary told Nittle.

“People are more likely to come into contact with retailers than with police,” she said. “I haven’t seen police all day, but I’ve been in about four retail establishments.”

For Bates, the experience came with the added frustration of being accosted by police while pregnant. “Being pregnant is already high risk,” she said, and being suspected of a crime when she was trying to get her children ready for school was “just additional stress that I don’t need.”

Black moms already face discrimination and inequity in health care settings — many report struggling to be taken seriously by providers, Vox’s P.R. Lockhart writes, and black women are three to four times more likely than white women to die from complications of pregnancy. What’s more, the experience of racism can affect their pregnancies and future children — some experts believe the stress of experiencing racism puts black women at elevated risk of delivering prematurely, which in turn increases the risk of infant mortality.

For Bates, the emotional impact of having to prove she wasn’t a thief by exposing her pregnant belly to a police officer has been substantial. “After this incident,” Tinoco of WSOC, said, “she was so sick to her stomach, she regrets leaving the house.”