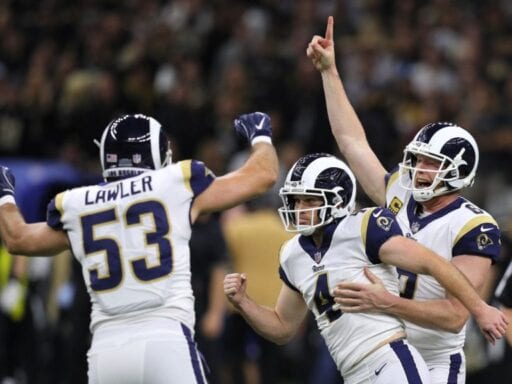 During this year’s Super Bowl, you can expect to see expensive and flashy ads from all the usual suspects: car companies like Kia and Audi, junk food and soda brands like Pepsi and Frito-Lay, and classic drugstore brands such as Procter & Gamble’s Olay and Colgate. What you won’t see advertised during the big game, though, is cannabis.

Acreage Holdings, a medical cannabis company that operates in 11 states, says that last week, CBS, which broadcasts the Super Bowl, rejected an ad it had submitted to run during the game. The network told the cannabis company that the ad was “not consistent with the network’s advertising policies.” In an email to Vox, CBS said it does “not currently accept cannabis-related advertising.”

The Acreage Super Bowl ad does not promote the company’s products, nor does it try to sell any sort of cannabis. Instead, it focuses on how medical marijuana can be used to treat sickness. The ad features a child experiencing seizures, with his mother explaining to the camera how prescriptions drugs didn’t help and even hurt her son. The ad also spotlights someone who dealt with opioid addiction and a veteran amputee. It ends with a call for viewers to contact their representatives and ask them to advocate for changes to marijuana laws.

In a statement emailed to Vox, Acreage CEO Kevin Murphy said the ad was supposed to deliver the message that “the time is now for sensible legislation.”

“We chose to launch the campaign on the nation’s greatest stage — the Super Bowl,” he wrote. “CBS’s decision to reject the campaign represents the exact issue we are tackling — that federal law translates to no access to the medicine or even education about it.”

Marijuana is now legal for recreational use in 10 states, and for medical use in 33. Hemp, a species of the cannabis plant, just became legal under the new farm bill, too, paving the way for the burgeoning industry of CBD, the non-psychoactive cannabinoid of cannabis.

Yet it isn’t all that surprising that CBS wouldn’t allow the Acreage ad to air during the Super Bowl, which attracts more than 100 million viewers annually. Cannabis is still categorized as a Schedule 1 drug on the federal level, so its legal status is continually subjected to obstacles.

In a state like Colorado, for example, cannabis is legal, but businesses must work through all sorts of loopholes, like not being able to open bank accounts or take out business loans, and must operate as cash-only businesses. Meanwhile, in Maryland, where medical marijuana is legal, the state recently moved to ban all forms of cannabis advertising from billboards, TV, and radio shows.

The NFL, too, has a ban on cannabis (though it’s reportedly open to reconsidering), and so it makes sense that the league wouldn’t want to promote the substance, even though not all players are on board with this doctrine. Last week, one retired Denver Broncos player told CBS that since 2008, he’s been using medical marijuana instead of prescribed opioids to treat the pain related to his career injuries, and that “football is a lot worse for [the NFL] than the marijuana.”

Acreage is not the first company to have an ad rejected from airing during the Super Bowl. Last year, the vitamin and supplements company GNC had its ad rejected after the NFL Players Association complained it was unfair to promote products that players aren’t allowed to use. The American building supply company 84 Lumber also had its Super Bowl ad rejected last year; it was dubbed too political because it depicted a story about a Mexican family and a border wall. Pornhub, GoDaddy, Ashley Madison, and Bud Light have also had Super Bowl ads rejected over the years for being too sexual.

Plenty of companies create racy and controversial ads they know will get rejected in order to grab attention. It’s likely that Acreage knew its commercial wouldn’t make it past the gatekeepers, considering that cannabis, and any content related to it, is still pretty controversial.

“We’re not particularly surprised that CBS and/or the NFL rejected the content,” George Allen, the president of Acreage, told USA Today. “And that is actually less a statement about them and more we think a statement about where we stand right now in this country. One of the hardest parts about this business is the ambiguity that we operate within. We do the best we can to navigate a complex fabric of state and federal policy, much of which conflicts.”

The NFL, like much of the country, doesn’t know how to deal with cannabis

Cannabis’s change in legal status and rise in mainstream American culture has caused plenty of confusion, and CBS’s treatment of a cannabis advertisement is just the latest example.

Just days after hemp was legalized, for example, Food and Drug Administration Commissioner Scott Gottlieb issued a statement noting that the FDA still sees all cannabis, even CBD, as a drug. Facebook, too, has been unsure of how to deal with legal cannabis; last month, it took down numerous CBD pages that it said were “promoting the sale of prescription pharmaceuticals.” When reached for comment, Facebook told Vox it had removed these CBD business pages erroneously, but many of them have yet to be reinstated.

CBS’s decision to stop cannabis companies from joining in on a major advertising event like the Super Bowl is not reflective of the country’s changing views of cannabis, though. According to the Pew Research Center, 62 percent of the country — or two in three Americans — supports legalizing marijuana. Politicians like New York Gov. Andrew Cuomo and Sens. Bernie Sanders (I-VT) and Cory Booker (D-NJ) have run on platforms that push to legalize, or at least decriminalize, marijuana.

Acreage itself also represents the quakes and shifts within the cannabis industry. John Boehner, the former Republican speaker of the House who once said he was “unalterably opposed” to the legalization of cannabis, joined the company’s board last year. On Twitter, he told followers that his “thinking on cannabis has evolved” and that he was “convinced de-scheduling the drug is needed so we can do research, help our veterans, and reverse the opioid epidemic ravaging our communities.”

I’m joining the board of #AcreageHoldings because my thinking on cannabis has evolved. I’m convinced de-scheduling the drug is needed so we can do research, help our veterans, and reverse the opioid epidemic ravaging our communities. @AcreageCannabis https://t.co/f5i9KcQD0W

“You will see countless ads (during the Super Bowl) for beer and erectile dysfunction medications but our ad with an educational goal to help people who are suffering is rejected,” he told Green Entrepreneur.

Damashek added that within all the noise about the company’s Super Bowl ad being rejected, there’s “irony we are looking to highlight” in the US about cannabis. The ad will likely ignite a discussion about which products are and aren’t allowed to be spotlighted, and this might highlight new perspectives that could make CBS want to change its advertising policies.

It was, after all, only 100 years ago that alcohol was legally banned in the United States, and yet today it’s nearly impossible to imagine a Super Bowl celebration or advertising reel that doesn’t feature booze.

Mitt Romney is now just like every other Republican: he’s with Trump for the tax cuts
How the Supreme Court revived Jim Crow voter suppression tactics
The coronavirus will cause a child care crisis in America
Why science can’t replace religion
The 2020 vice presidential debate
Joker has toxic fans. Does that mean it shouldn’t exist?