This surgeon wants to offer cheap MRIs. A state law is getting in his way. 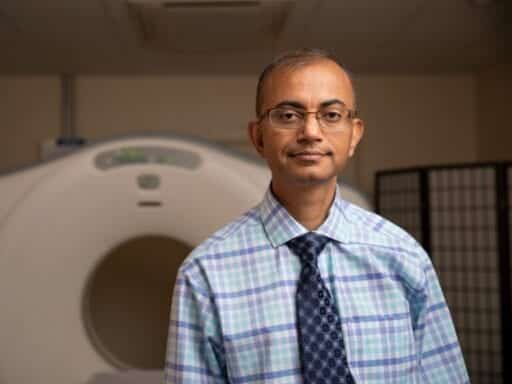 Dr. Gajendra Singh walked out of his local hospital’s outpatient department last year, having been told an ultrasound for some vague abdominal pain he was feeling would cost $1,200 or so, and decided enough was enough. If he was balking at the price of a routine medical scan, what must people who weren’t well-paid medical professionals be thinking?

The India-born surgeon decided he would open his own imaging center in Winston-Salem, North Carolina, and charge a lot less. Singh launched his business in August and decided to post his prices, as low as $500 for an MRI, on a banner outside the office building and on his website.

There was just one barrier to fully realizing his vision: a North Carolina law that he and his lawyers argue essentially gives hospitals a monopoly over MRI scans and other services.

Singh ran into the state’s “certificate of need” law, which prohibited him from buying a permanent MRI machine, which meant his office couldn’t always offer patients one of the most important imaging services in medicine. He has resorted to renting a mobile MRI machine a couple of days a week. But it will cost him a lot more over time than a permanent machine would, and five days a week, his office can’t perform MRIs.

Now Singh has had enough. He filed a lawsuit Monday in North Carolina Superior Court to overturn the state law, news that he and his attorneys from the Institute for Justice shared exclusively with Vox.

Singh specializes in complex liver transplants and surgeries to treat gastrointestinal cancers. He appreciates the importance of a good MRI. “Those patients need imaging. As a surgeon, we need to see what we’re going to do. We often need a lot of imaging,” he told me in a phone interview.

As Vox’s Sarah Kliff reported as part of her project to collect emergency room bills, Americans can sometimes be charged as much as $24,000 if they get an MRI at a hospital’s ER. Singh is offering a substantial discount on a medical service plagued by high costs.

But because his office can only offer MRIs twice a week, they must regularly turn away patients who need them — some of whom shouldn’t wait to get important medical scans.

“We lose all those patients,” said Singh, who also owns his own surgery practice.

Certificate-of-need laws were in vogue 40 years ago. But lawmakers quickly discovered that, in practice, they often served to protect hospitals from competition. Forty-nine states had such a statute at one time, but in the decades since, 14 states have repealed theirs.

Singh wants to make North Carolina the next one. He says if he prevails, and he’s able to purchase a permanent MRI, he hopes it will bring in more money for his center — and then, he says, he can lower prices more.

“If I wanted to just have money, I didn’t have to do all this stuff,” he said. “Do I want to make money? Absolutely. But I didn’t open this imaging center to buy a Lamborghini.”

The history of certificate-of-need laws, explained

Under North Carolina’s law, a medical provider must obtain a government permit (a “certificate of need”) if they want to offer certain new services or buy new equipment. But first, every year, state officials will make a determination about whether certain services are needed in different places.

If the state has decided an area doesn’t need a service, then other providers are barred from even applying for a permit. That is what Singh ran into: He wasn’t allowed to apply to purchase a permanent MRI for his Winston-Salem center. State officials had already decided it wasn’t needed there.

Even if he could apply, other providers in the area could contest his application. Singh’s attorneys estimate the entire process of applying for and defending a certificate of need can cost up to $400,000 and last as long as three years. A permanent MRI machine would cost Singh less than $750,000.

“There has not been a single instant that it has gone uncontested,” Renée Flaherty, one of Singh’s attorneys from the Institute for Justice, told me.

CON laws started popping up in the 1960s, and in 1974, Congress made them or less standard by linking federal funding to states adopting such a law. Louisiana was the only state that didn’t. They were well-intentioned, with the goal of exercising strong oversight of new health care providers.

But lawmakers and policy experts found that, as much as anything, they stopped new competition from challenging existing monopolies hospitals have on certain health care services.

Nicholas Bagley, a University of Michigan health law professor, told me certificate-of-need laws might have made sense back when health care was treated more like a public utility. But they make less and less sense under our current market-based health care ecosystem.

“They impose red tape, they slow the adoption of new technologies, and they impair competition,” he told me via email. “The fact that they’re still on the books in two-thirds of the states is a testament to the political power of entrenched players.”

Don Taylor Jr., a health policy professor at Duke University, offered a slightly different perspective. He allowed that North Carolina’s law could be anti-competitive specifically for MRIs, but he noted that there are concerns about unnecessary scans if the rules are rolled back and about nixing them for other services.

Congress effectively repealed its CON endorsement in 1986, and, since then, 14 states have undone their laws. But many, including North Carolina, have kept theirs on the books. Bills are regularly introduced to repeal the state’s law, Singh’s attorneys told me, but so far, they haven’t gone anywhere.

“Unfortunately,” Flaherty said, “with this law, somebody tries every year, I think literally every year, but it never makes it through because of the hospitals.”

So Singh — with the help of the Institute for Justice, which is also supporting anti-CON litigation in Iowa — decided to take the issue to the state courts.

The legal argument against certificate of need is quite simple: The North Carolina Constitution bans monopolies, and the CON law effectively creates and preserves a monopoly by making it difficult or outright impossible for competitors to open a business.

“The effect of the MRI-CON requirement is to prevent [Singh] from acquiring a fixed MRI scanner to provide safe, quality, affordable MRI scans to patients who need them, solely because incumbent providers got there first,” the lawsuit on Singh’s behalf alleges. “Therefore, the MRI-CON requirement, both on its face and as applied, grants certain health care providers a monopoly in violation… of the North Carolina Constitution.”

Singh’s lawyers also argue the law violates their client’s equal protection rights and his right to earn a living as guaranteed by the state Constitution.

They modeled their argument very deliberately: In 1973, the North Carolina Supreme Court actually struck down the state’s CON law for those three reasons. But the state legislature passed another law to replace the overturned one, and nobody has challenged it since then using the same rationale.

Vox reached out to North Carolina Gov. Roy Cooper, the state health department, and the state legislature’s leaders — all named defendants in the litigation — for comment. They either did not reply or declined to comment. The North Carolina Healthcare Association, the hospitals lobbying group, which is expected to take an active interest in the case, also declined to comment on the lawsuit.

A loophole of sorts has allowed Singh to rent a mobile MRI unit a few days a week, providing most versions of that scan for between $500 and $700. That is a little bit below the national average, while the Charlotte Observer reported in 2016 the average MRI cost statewide in North Carolina ran about $1,200 or so, though it varied depending on the specific location.

Singh’s imaging center is also providing X-rays for $70, ultrasounds for $200 or $250 (remember, his discovering he must pay $1,200 is what started this venture), and echocardiograms for $300. He said he started by seeing cash-only patients but expanded to accept most kinds of insurance by the beginning of 2018.

Outside buyers have approached Singh about purchasing his imaging business from him, he told me, but he has resisted. He really sounds like he just wants to provide cheap MRIs in an area where 24 percent of people are in poverty, a rate that nearly doubled from 2008 to 2012.

“Competition is good for the community,” Singh, who said his family “didn’t have much” growing up in India, told me. “We will pay less money by owning an MRI. We will generate more money. I can reduce my prices further down — and maybe make some money.”

Robert Mueller was never going to end Donald Trump’s presidency
You can now personalize your iPhone home screen. People are already making it weird.
School picture day is stressful and expensive. Why do we do it?
“They want to take care of certain little tiny fish”: Trump’s Hannity interview was off the rails
Brett Kavanaugh’s questionable definition of “boof,” explained
Facebook’s next move