“This was a meeting to get information on an opponent”: Trump changes his story on Russia meeting 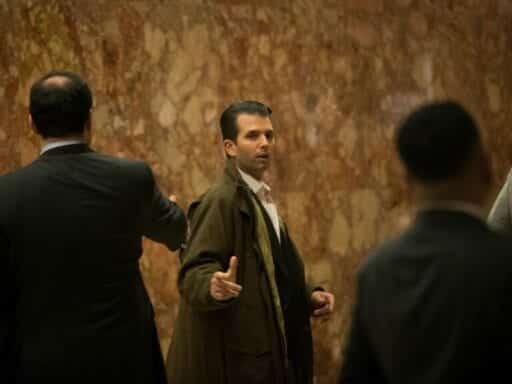 In denying reports he’s worried about legal scrutiny of Donald Trump Jr., Trump made a big shift in how he talks about the Trump Tower meeting.

President Donald Trump hit back at reports he’s worried his son Donald Trump Jr. could be in legal jeopardy over his involvement in the meeting in Trump Tower to get dirt on Hillary Clinton in 2016. The president’s defense: The meeting, which the administration initially wrote off as about Russian adoption, was, in fact, to get information on a political opponent. And that’s “totally legal.” But Trump himself definitely didn’t know about it.

Trump appeared to be reacting by a story by Philip Rucker, Robert Costa, and Ashley Parker at the Washington Post juxtaposing Trump’s private “brooding” and public “roaring” in recent days. The Post reports Trump has been increasingly anxious about special counsel Robert Mueller’s investigation into Russian interference in the 2016 elections and expressed to confidants concern that some people around him, including his eldest son, might be caught up in the probe.

Trump Jr. is under scrutiny for his role in organizing a meeting at Trump Tower in June 2016 between campaign officials and Russians — a move that the president worries means he “inadvertently may have wandered into legal jeopardy,” the Post reports. CNN separately reported that Trump is concerned about his son’s exposure in the Russia probe.

The president on Sunday morning reacted to the reports, saying suggestions he’s worried about the meeting are a “complete fabrication.” He said the meeting was completely above board and went nowhere — and then tacked on he, personally, knew nothing about it.

Fake News reporting, a complete fabrication, that I am concerned about the meeting my wonderful son, Donald, had in Trump Tower. This was a meeting to get information on an opponent, totally legal and done all the time in politics – and it went nowhere. I did not know about it!

On June 9, 2018, Trump Jr., Trump campaign chairman Paul Manafort, and Trump’s son-in-law Jared Kushner took a meeting with a Russian lawyer and four other people with Russian ties in Trump Tower. The meeting remained secret for more than a year, until the New York Times in July 2017 began to report about its occurrence.

Initially, the Trump team brushed the meeting aside, saying it had been about Russian adoptions in a statement reportedly crafted largely by the president himself. But as more information continued to dribble out, including a Times report that the purpose had been to get damaging information about Clinton, the initial story unraveled, and Trump Jr. himself preemptively tweeted out a statement and the email chain setting up the meeting. In the emails, Trump Jr. responds to the offer of dirt on Clinton with, “If it’s what you say I love it.”

Here’s my statement and the full email chain pic.twitter.com/x050r5n5LQ

Vox’s Andrew Prokop has a full explainer on the Trump Tower meeting, which has become a major element of special counsel Mueller’s investigation into Russian interference in the 2016 election and possible collusion between the Trump campaign and Russia.

The Trump team’s story on the meeting and, more broadly, its contacts with Russians has morphed in recent months. It’s gone from “the meeting was about adoptions” to “fine, it was about dirt on Clinton but there’s nothing wrong with that,” in Trump’s Sunday tweet.

Trump has held he didn’t know about the meeting, but his former lawyer and fixer, Michael Cohen, reportedly now says he did. Trump’s current lawyer, Rudy Giuliani, says Trump didn’t know, and both he and Trump have started to say that even if there was some sort of collusion between the Trump campaign and Russia, that’s not necessarily a crime anyway.

The fact that the story keeps changing is part of the issue — and what’s concerning. Even in Trump’s Sunday tweet, he claims the Trump Tower meeting was completely okay and at the same time seems astute enough to want to distance himself from it.

In an interview with journalist George Stephanopoulos on ABC’s This Week, Trump attorney Jay Sekulow shrugged off questions about his own changing stories on the Trump Tower meeting, saying that he “had bad information at the time,” and that “doesn’t mean illegality.” He said he has “no knowledge at all” of Trump Jr. being told he’s the target of an investigation and echoed the president’s argument that whatever happened in that meeting, it’s not illegal anyway.

“The question is, how would it be illegal?” he said. That’s what Mueller has set out to find out.

Baghdadi, Iran, and trade: What Trump will boast about at the State of the Union
In a polarized world, YouTube can not remain neutral
From Citizen to Signal, the most popular apps right now reflect America’s protests
Dr. Deborah Birx says, “Social distancing will be with us through the summer”
Some Tea Party Republicans in South Carolina are voting for Bernie Sanders
Vox Sentences: The Catholic sex abuse reckoning continues in Pennsylvania