This week in TikTok: 7 videos to watch about this weekend’s protests 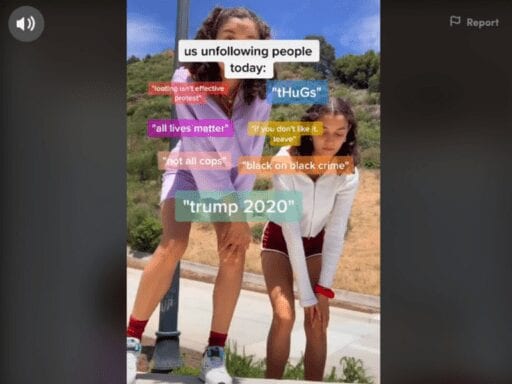 Plus, how Childish Gambino’s “This Is America” became a protest anthem.

Over the weekend, there was only one story: the protests against police brutality and institutional racism that have spread all over America, and now the world, in the wake of the killing of George Floyd. But on Twitter, rumors started to spread that TikTok was suppressing the #BlackLivesMatter hashtag and others related to the movement.

To anyone familiar with TikTok and its parent company ByteDance’s history of censoring content deemed sensitive to certain governments, it wouldn’t sound all that surprising. Only this month, creators changed their avatars to the black power symbol and united on TikTok to protest the longtime censorship that black creators have faced for speaking out against racism.

The hashtag, though, was not actually banned — TikTok says it was experiencing a glitch that impacted hashtag view counts displayed during uploading, and the issue was resolved quickly. It’s why when I opened the app on Saturday, I was glad to see my For You feed filled almost exclusively with videos from creators of color speaking out about the ongoing protests.

Here are some of them:

In between donating to bail funds and other anti-racism organizations or supporting your local protest efforts, spend some time exploring the Black Lives Matter hashtag on TikTok — these are only a handful of the videos I came across over the weekend.

At Mashable, Morgan Sung detailed how a remix of “This Is America” by Childish Gambino and Post Malone’s “Congratulations” became the unofficial anthem for the protests. For months, black TikTokers have been using the song, which is explicitly about police brutality, to highlight structural racism. When the remix began circulating, however, non-black TikTokers used it to make videos about other social issues, like campus sexual assault, lack of access to health care, and xenophobia.

That’s also when the song started to be appropriated by white TikTokers who attempted to expose prejudice against Trump supporters, or claim that, actually, America is fine and great. After the killing of George Floyd last week, however, many users set their videos of the protests to the song. Whether intentional or not, thanks to TikTok’s music library the sound acted as a hub for people searching for news and footage from the front lines, like an audio hashtag. It’s a neat way of exploiting tech features to organize for social causes.

Here is a painfully on-point impression of what some white teen girls’ Instagram Stories looked like this weekend.

Like it or not, tech companies can use your phone location data to map social distancing
The White House went dark as protests raged outside
New claims that Trump failed to protect American journalists in Egypt demand investigation
March 17 primaries: Live results
How Oprah Winfrey became our interviewer in chief
An outbreak of acute flaccid myelitis, the polio-like illness, is affecting kids