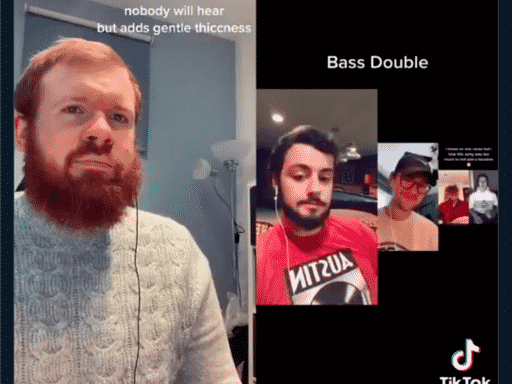 A couple of months ago, when Spotify was showing each of its users their most popular songs and artists of 2020, I saw a meme that was made to look like someone’s most listened-to genre was “1800s sea shanties.” I chuckled and re-posted it to my Instagram Story, thinking, “‘Sea shanty,’ now that’s a term you don’t hear every day” and forgot about it.

That was, until two weeks ago, when a real, live sea shanty came across my TikTok “For You” page. The video featured a man singing a song whose lyrics I could barely make out due to his thick Scottish accent but was definitely saying something about a ship and a shore. Another man had added several lines of tenor and baritone to harmonize with the song. It sounded nice in a kind of brain-tingly way, but my first thought was more like this is the dorkiest thing I’ve ever seen and so scrolled past.

But looking back, I should have known that this was precisely the sort of thing that the internet would descend upon and cling to with a ferocity greater than a swashbuckling sailor gripping an oar in a mid-Atlantic storm. I should have been able to imagine the tweet with literally hundreds of thousands of likes saying “SeaShantyTok keeps getting better” or declaring 2021 the “year of the sea shanty” all because a video had gone viral on TikTok, which is hardly extraordinary on a platform where random videos are constantly going viral.

It should have been easy to envision the breathless coverage that followed once the sea shanty videos had made the jump from TikTok to Twitter, where a far greater number of adult journalists consume news. Of course, all of the websites were attempting to explain why a random New Zealand sea shanty called “Wellerman” was suddenly stuck in everyone’s head. “Sea shanties have taken over TikTok. Here’s why,” wrote CNET. The New York Times stepped in to correct us (actually, they are “whaling songs”) while the New Yorker did what the New Yorker does best: Spell words weirdly (what the hell is “sea-chantey?”).

“Um, it makes total sense we’re all into sea shanties now,” claimed Vulture, the reason being “they are unifying, survivalist songs, designed to transform a huge group of people into one collective body, all working together to keep the ship afloat.” Few went as far to elevate a handful of TikToks to unearned significance than the Washington Post, whose (surely semi-ironic) headline was “Sea shanties are here to save us.”

I regret to inform you: They are not.

The thing about viral sea shanties is that there is literally nothing to explain at all. There is no need to square sea shanty TikTok with our current political moment or pretend that there was something inevitable about the popularity of sea shanties in early January 2021.

What’s actually happening is the convergence of several forces that shove niche content in front of an enormous amount of eyeballs. TikTok is full of unconventional subcultures, certainly more unconventional than any I’ve ever come across. Its algorithm uses AI that is trained to spot trending videos combined with — crucially — a sprinkle of pure randomness, which means that sometimes those videos end up going massively viral.

The likely chain of events was this: Someone was shown a particularly catchy video of several people singing a sea shanty and liked it, so it was then shown to more people who also liked it, and then someone liked it enough to post it on Twitter, where it went even more viral because Twitter is the exact audience who would look at this and be like, “Wow, sea shanties are going viral on TikTok, how quirky and uplifting!” Then a bunch of reporters like me saw it and knew that it would make for decent content on our websites, because readers and viewers like watching things that are novel but also familiar, especially right now, when our brains are exhausted from constant stimulation but desperate for even more of it.

This is why phenomena like sea shanties keep happening over and over again and why none of it ultimately matters. As Kyle Chayka and Taylor Lorenz discussed on Twitter, “The quarantine-era internet just makes us cycle through obscure niches of culture faster and faster,” and “It’s sort of just some dumb inconsequential/non-controversial piece of culture that everyone can write up/talk about.” Baffler editor Jess Bergman tweeted, ‘If I see one more explainer about sea shanties on the teen video app I am going to go postal.”

Of course, all of us are people whose job is to interpret the internet, but I sense that there’s some fatigue happening on the consumer side as well. When Elon Musk, the richest man in human history and terminal sufferer of posting disease, tweeted about sea shanties, it was then astutely compared to the Denny’s Twitter account killing memes in the 2010s. People get annoyed at this stuff. There’s just too much of it.

It would be lovely if sea shanties did actually save us, wouldn’t it? But we know better by now, because the Ratatouille musical did not save us neither did the Fleetwood Mac skateboarding guy and neither will whatever thing two weeks from now “everyone on TikTok is obsessed with!” (probably the Bridgerton musical). To avoid sounding like the world’s biggest curmudgeon, I do think it is generally nice watching people discover and enjoy something they wouldn’t have otherwise or collaborate with each other across the internet (the video where a bunch of people sing Smash Mouth’s “All Star” in sea shanty cadence is funny), but none of that is unique to sea shanties. It’s just the way things work now.

I’ll leave you with the chorus to the Wellerman song, which one could argue is also a metaphor for finding hope on the internet. Perhaps one day, after our work is done, things will get better, and we can all get the hell out of here.

Soon may the Wellerman come
To bring us sugar and tea and rum
One day, when the tonguin’ is done
We’ll take our leave and go

If you haven’t seen Kansas state Rep. Christina Haswood’s TikTok of herself getting ready to be sworn into the Kansas House of Representatives in traditional Navajo regalia, I don’t know what to tell you except watch it if you would like to feel joy!

Self-checkout is terrible. It will never get better. It should die.
Everything you need to know about Palantir, the secretive company coming for all your data
The one crucial thing missing from Biden’s climate plan
The Handmaid’s Tale season 2 was masterful. But it may have broken the show.
Who is winning the March 10 delegate count so far
The conflict between Armenia and Azerbaijan, explained