This week in TikTok: How a Ratatouille joke led to a Broadway musical 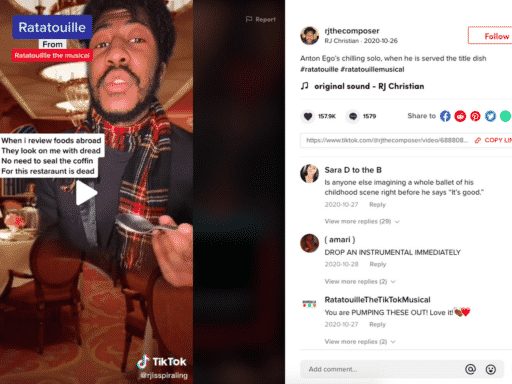 The crowdsourced project finally got its happy ending.

The Ratatouille musical has, for the past few months, existed mostly as a quirky subculture on TikTok, where people upload ideas for a nonexistent Broadway production based on the 2007 Pixar movie. Like most things on TikTok, it began as a joke, but since August, amateur (along with some professional) choreographers, songwriters, and puppeteers have posted their submissions to TikTok, with the most viral songs or costume design videos generally being accepted as canon. If a typical musical is a dictatorship, written and cast by a small handful of directors, producers, and writers, the Ratatouille musical was as close to a true democracy as possible.

The crowdsourced musical naturally gained a sizable amount of media attention, as an irresistible feel-good story about new technologies allowing people stuck at home to connect with one another while also making art. On New Years Day, the Ratatousical became an (almost) bona fide Broadway show, complete with its own headliners: Tituss Burgess in the starring role of Remy the rat and Wayne Brady as Remy’s dad. With Broadway shut down, the show was entirely virtual, pre-filmed to air online. Tickets cost $5, and all proceeds benefited the Actors Fund.

Anton Ego’s chilling solo, when he is served the title dish #ratatouille #ratatouillemusical

To be honest, I’ve long been skeptical of the Ratatouille musical, not only because the songs, which were inescapable on TikTok, were starting to get a little bit annoying, but because TikTok is not exactly a notable platform when it comes to crediting creators. An astonishing percentage of the app is made up of users doing the same dance or making the same joke without naming the originator, whether that’s out of a desire to falsely claim credit or because it’s nearly impossible to determine who the originator even is. And because Ratatouille is intellectual property owned by the notoriously litigious Disney, it seemed highly unlikely to me that anything resembling an actual musical would fairly recognize the dozens of people who invented it.

It seems that the creators shared some of that skepticism, too. In Julia Reinstein’s behind-the-scenes BuzzFeed story on how the production went down, she spoke to TikTokers who were initially concerned that they’d be cut out of the process or even sued for infringing on Disney’s IP.

Instead, the opposite happened. Seaview Productions, which produced the Tony-nominated Slave Play, secured a green light from Disney to put on a one-time benefit concert. Within the span of just a few weeks, TikTok creators worked with Broadway professionals to put on the show, for which all of them were paid. Each will also retain the rights to their songs.

The original Ratatousical TikTokers and seem overjoyed with the result. “This event really highlights a lot of the TikTok creators, and we’re very happy we got this recognition,” set designer Chris Routh told the New York Times.

“This is a piece of theater that is grassroots, homegrown, and from the fans, and it was made without the normal gatekeepers OK-ing it,” Patrick Foley, who co-wrote the book, said to BuzzFeed. “The story of Ratatouille is ‘anyone can cook’ — the story of the nontraditional hero being allowed to follow his dreams in a space that was previously hostile toward him. And as cheesy as it may be, that’s the dream of many people.”

These are just so fun to make. Seriously. #ratatouille #ratatouillemusical #musical #theatre #musicaltheatre

Though the musical officially went offline Monday night (it was available to watch for a few days after January 1), it ended up raising more than $1 million for the Actors Fund. It may be gone from the internet, but Ashley Lee of the LA Times predicts that what happened with Ratatouille could offer a more democratic example of how musical theater is created and distributed. “The talent is there; the work is just as good,” she writes. “And with the initial TikTok videos getting a collective 200 million views and the stream’s pay-as-you-can ticket sales raising more than $1 million so far, the audience is hungry.”

In short, it seems like the best-case scenario for a crowdsourced project that could have gone horribly off the rails, particularly on a platform where intellectual property is valuable and therefore highly subject to theft. If only every internet meme had such a happy ending!

I don’t watch football, but I have watched this TikTok where a guy turns all the NFL themes into indie folk songs one million times. They’re so good!

Swing-state senators are hugging close to Trump despite 2019 election losses
Did Brazilians vote against democracy on Sunday?
The best Christmas movies aren't about Christmas
The retail apocalypse: traditional retail chains are dying across America
Netflix’s excellent Horse Girl looks like a typical quirky indie comedy. It’s more than that.
Progressive activists think they have a shot at stopping Brett Kavanaugh