This week in TikTok: So … is it getting banned or what? 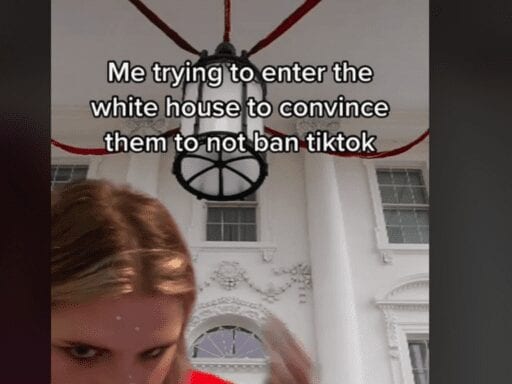 Plus, the digital blackface problem we’re finally talking about.

If you or someone you love has recently been forced to know or care about what TikTok is, first of all, I’m sorry, this app will take over your life.

Second of all, when was the last time normal people got this riled up about a potential sale of a foreign tech company? I certainly can’t recall, but underneath all the news — is Trump banning the app? Is Microsoft buying it? Are the faceless, omnipotent gods at TikTok stealing data? — are anxieties about China and, specifically, fears that the US may not be the one setting the ground rules of the internet.

On August 6, President Trump issued executive orders that would ban two apps, TikTok and WeChat, from operating in the US if they were not sold by their respective Chinese parent companies by September 15. (In response, TikTok is now suing the Trump administration.) National security concerns over how the Chinese government could force TikTok to hand over American user data or censor content sensitive to the Communist Party of China have been brewing for more than a year.

Both Microsoft and Twitter have reportedly been in talks to acquire TikTok, though a sale would be incalculably messy: Microsoft isn’t trying to buy TikTok, it’s trying to buy TikTok in the US, Canada, Australia, and New Zealand, and as my colleague Russell Brandom explains at The Verge, no one has ever split up a social network along regional lines; it’s unclear whether that’s even possible. “That central problem is much harder than anyone is willing to admit,” he writes.

Meanwhile, the vultures are swarming. Last week Instagram launched its long-in-the-works copycat product, Reels, in the US. (Snapchat also has a competitor feature.) Though Reels is functionally identical to TikTok, it is as of yet unable to recreate the particular joy and originality of its predecessor, and most of the content seems like a sad facsimile of TikTok’s most boring memes.

But back to why any of this matters to people who don’t otherwise care about viral dances or technology companies. The best and most clear-headed take on all of this, in my opinion, comes from Sarah Jeong, also writing for The Verge. She dubs the central strategy in play here “information-nationalism,” or the idea that to point out a country’s failures and human rights abuses is to make it weak (e.g. to accurately describe slavery’s history in the US is to slander America).

The US, she argues, is afraid of TikTok because the country has made it an avatar of the Chinese approach to tech. The irony here, though, is that there are plenty of reasons to be actively terrified of how US tech companies and its own government use that same data, particularly the information revealed by Edward Snowden in 2013; when American politicians extoll the virtues of Silicon Valley while stoking fears about China, it’s rather hypocritical.

“Just like China had tried to use Google to spy on its activists, the National Security Agency had been secretly collecting bulk data from almost every American company you could think of,” she writes. “The federal government has made it harder to see numbers on coronavirus infections. The president has even said on the record that increased testing will make him look bad. The logic behind this is the same logic that drove the Chinese Communist Party to hide the pandemic in Wuhan in the very early days, much to everyone’s detriment. The similarities in their behavior will not stop the president from blaming China for a cover-up — that’s exactly how information-nationalism works.”

Even if Instagram Reels takes off, or even if TikTok is turned to dust with the stroke of a pen, it won’t matter, because while TikTok may be the first Chinese social media company to succeed on a truly global level, it likely won’t be the last. If the US believes that this is a problem, information-nationalism isn’t the answer.

On TikTok, some memes are funny, many are cringe, and a few are incredibly disgusting (do not click on that link unless you want to watch videos of people eating cereal with milk out of each other’s mouths). But among the worst and most insidious is the prevalence of digital blackface, in which white creators lip-sync to Black peoples’ voices or mimic their affectations. Digital blackface has always been a problem on the internet, and on TikTok, where mimicry is the lingua franca, it’s found new fertile ground.

In this month’s Wired cover story, Jason Parham explores how TikTok has shaped this evolution, where memes like “Hot Cheeto Girl” and audio like Nene Leakes’s “whew chile, the ghetto” have become fair game for white creators. Said one woman interviewed for the story, “When you call them out, it’s, ‘Anyone of any race can be a Hot Cheeto Girl.’ No sweetheart, we know what you’re doing. We know that the Hot Cheeto Girl is just a derivative of the ghetto girl, the hood rat, the Shanaynay that people used to call Black and Latinx women.”

The piece also includes a series of disturbing statements from TikTok creators on the racism they’ve experienced on the app, either from fellow users or from the technology itself — videos get taken down because sign language is read as a “gang symbol,” censorship of reactions to racist videos but no action taken on the racist video itself. It’s now common for Black creators to keep a backup account for when their main account eventually gets suspended for some nebulous violation.

Most illuminating in Parham’s piece, though, is when he details the importance of seeing images of Black people online, and TikTok, despite its apparent issues, has been a home for many Black creators. Here he is talking about what the early days of social media as a Black person were like:

“It wasn’t until college, where I spent hours a day clicking through Facebook, feeling connected to a world and the people who made it for what felt like the very first time, that I finally began to articulate what part of me had known since boyhood: that images make us true. From my laptop screen I gazed out into a kind of Black Universe. Here were Black people doing what we do: playing spades at a barbecue; hanging out with family members back home, caught mid-laugh. We posed for the camera every chance we got because we understood, though we never spoke it, that we’d exist here — somewhere — forever. There was air in our lungs, fire in our bones.” When white people attempt to put on that Blackness for TikTok, this is what they’re erasing.

This was a rather depressing newsletter, so please enjoy this incredibly soothing video of a self-proclaimed cottagecore lesbian preparing a picnic for her girlfriend. The sandwich looks so good!