This week in TikTok: The absurdity of the Capitol siege 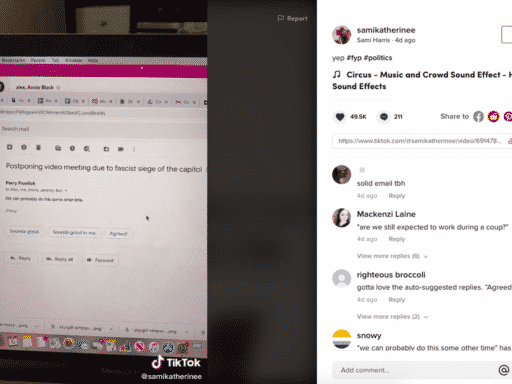 Last week’s events, according to TikTok.

Last week, after a mob of Trump supporters stormed the Capitol building in an hours-long siege that left at least five people dead, the events were at the top of every newspaper, website, and news program. New details emerged every moment on social media platforms, where users tried to make sense of what they saw.

But unlike the days following the first racial justice protests last spring, which were all over TikTok, the Capitol riot was surprisingly difficult to find on the app. There are a few reasons for this: The first is that TikTok is not, and was never intended to be, a news-sharing platform. The feed is not at all chronological, and it’s difficult to determine when or in what context a video was posted, which means that the videos on users’ For You pages on Thursday had likely been trending already for days or weeks.

The second reason is that TikTok likely didn’t want users to see it. The company has had a history of allegedly censoring political content, such as the Hong Kong protests and videos hashtagged with Black Lives Matter. This time, the decision was made based on the platform’s misinformation policy that can cause public harm, according to a statement provided to TechCrunch. TikTok removed videos of Trump’s speeches inciting his supporters, and redirected hashtags used by rioters like #stormthecapitol and #patriotparty. Of course, they didn’t have to ban Trump himself — he’d never made an account to begin with.

Despite seeing zero firsthand accounts of the Capitol riots on my own For You page, what I did see was actually a much more preferable articulation of what happened last week, according to the lived experience of the people watching it from home. Perhaps the most relatable account was the girl who made a video of a notification that a work meeting had been canceled with the subject line: “Postponing video meeting due to fascist siege of the capitol” and the message, “We can probably do this some other time.” Or the one where a woman ranks all the worst outfits of the rioters, because how could you not notice the particularly bizarre fashion choices? (BuzzFeed has a good roundup of the other video reactions.)

The attack was of course awful and terrifying to witness as progressively harrowing reports came through on TV and online. And while TikTok wasn’t exactly an escape from the news, it was at least an escape from the mood: The jokes and memes captured the surreality of it all, of canceled Zoom meetings and watching men in Viking helmets storm a government building while still adhering to velvet rope line formations.

A year ago (were we ever so young?!), I wrote about how in the wake of the impeachment trials, the various natural disasters around the world, and the looming possibility of World War III, TikTok was becoming a political platform against its will. Thanks to the app’s endemic brevity, the ability to see the face of a person talking to you, and the all-powerful algorithm that can turn a user into a celebrity overnight, TikTok had become “the most effective way for a random person to spread a message to the widest possible audience in the shortest amount of time.” This poses all sorts of risk factors for the spread of misinformation and extremist content — arguably the reason the Capitol attack occurred in the first place — but, ironically, it works the opposite way, too, surfacing the best topical jokes and reactions to what’s happening in the news.

It’s for this kind of content that we turn to TikTok in the first place: to see random people from anywhere in the world comment on our increasingly bizarre shared reality. As much as I’d love to predict that the world will get a little less strange and scary in 2021, so far this … does not seem to be the case.

My favorite new TikTok series is the woman who does impressions of different types of dancers at competitions. If you have ever enjoyed Dance Moms, I’m begging you to watch all of her videos immediately.

“There should be zero discrimination”: Joe Biden spoke in defense of transgender rights at Thursday’...
Here are the most effective ways to donate to help India
Trump’s catastrophic failure on testing is no joke
Young people are the new corps of engineers the US has been waiting for
Joe Biden and Bernie Sanders are building new, policy-focused task forces
Olivia Jade, the influencer at the center of the college admissions scandal, explained