Those who leave home, and those who stay 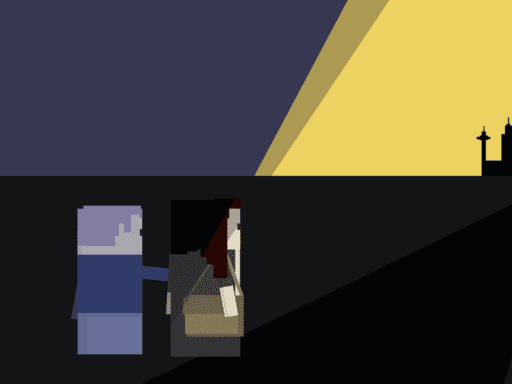 How we’re sorted into these groups.

In the late 2000s, some researchers had a novel idea: They would “crash” a few dozen high school reunions and interview more than 300 people.

The goal was to figure out why people returned to their rural hometowns after leaving for whatever reason.

But John Cromartie, one of the researchers, noticed a trend as he and his colleagues — Christiane von Reichert and Ryan O. Arthun — attended the gatherings.

The people who stayed in their hometown were less likely to show up.

And even when they did, Cromartie said asking them why they never left was “a difficult question to even broach.”

“There’s perhaps a stigma associated with not leaving,” he told me. “And high school reunions tend to be places where the people who come are relatively more successful.”

We often talk about the rural-urban split in America — between country folk and city folk. But this distinction misses a nuance: Americans are some of the most frequent migrants in the world; we don’t attach ourselves to a set geography.

This cartoon is about a different split — the clear and emerging disparities between people who left home and those who didn’t, especially outside the metro areas.

Those who stayed in their hometown tend to be less educated, less wealthy, and less hopeful.

Ultimately, they tend to be more likely to support Donald Trump.

Still, there are real disparities — political and economic — that emerge from the decision to move away from home, or not. And like so many other disparities, this split is the culmination of several systemic factors that sort us into these groups.

During the presidential campaign, Dan Cox and his colleagues at the Public Religion Research Institute were interested in the attitudes of people who had lived in the same community most of their lives. They were working off a body of research showing that exposing yourself to different people and cultures can change your perspective — make you less insular.

That’s why they devised a question about whether respondents lived in their childhood hometown.

But the responses showed very little demographic difference between people who left and people who stayed — even along partisan lines.

And when they drilled down more and looked at just white respondents, the split became very, very apparent:

They also designed a question to understand how afraid people were of “otherness,” and found that the white Trump voters — specifically those in the working class — have far more isolationist political views than everyone else. (“White working class” is defined as those without college degrees who work for an hourly wage.)

So when they published these polls, the narrative seemed pretty clear: Staying in your hometown makes you insular. You aren’t exposed to other people, other cultures, other experiences — and that otherness scares you. This fear aligns with Trump’s worldview.

It fell in line with the research showing it was racism and sexism that drove Trump’s rise, not economic dissatisfaction. And it paints the picture of people who are so insular that they won’t leave their hometown, even when economic conditions are subpar.

This isn’t necessarily wrong. But Cox pushed back a bit. He told me, “There is a value judgment often made with people who don’t leave their hometown — that there’s something wrong with that decision. Sometimes people don’t have opportunity to leave.”

How we sort our people

In 2001, sociologists Patrick Carr and Maria Kefalas moved to rural Iowa to understand what was happening to Middle America. They talked to hundreds of people about how they ended up where they were. And in their 2009 book, Hollowing Out the Middle, they outline some systemic factors that sort people into various groups.

In the book, they categorize people into four basic groups:

What they found was that rural communities spent a lot of resources on the achievers — the kids who show promise early on, and are pushed to leave town so they can reach their full potential.

School administrators basically admitted that’s what happens: “This is the job we set out to do.”

Ken Johnson, a University of New Hampshire demographer, told me, “It’s a theme that runs through a lot of the historical research on rural America. Rural communities lose the cream of the crop — lose the brightest kids — who go away and don’t come back.”

And we can see this rural “brain drain” in several data sets, although it impacts other non-urban areas as well.

The first is looking at migration patterns over different age groups. It shows people in their late teens and early 20s are the most likely to migrate — and they generally leave their smaller towns and suburbs to live in the urban core, whether for school or work. And rural communities are hurt most by this movement:

We can also see this in the demographics of college freshmen.

This means the people who are left behind are either not attending college or attending less selective colleges — which means it’s less likely for them to attain an advanced degree.

Over the past 50 years, this is the group that has been punished most:

As Trump reiterated on the campaign trail, there used to be good jobs for low-skilled workers in these towns — for coal workers, in manufacturing plants, in the auto industry. But these jobs have gone away, despite Trump’s desperate efforts to prop them up on the backs of future generations.

We can see this trend viscerally in survey data. People who left the community they grew up in tend to be more educated and earn higher incomes:

In addition, Cromartie points out that people who have low-skill jobs don’t need to move as far to find other opportunities. This is yet another mechanism that pushes certain people out into the world and keeps others close to home.

Cromartie said, “Someone who gets out of high school, settles down, and gets married versus someone who decides to see the world have very different life trajectories.”

The people who go back home

One way to think about leaving home is that it puts you in a position to accrue more economic and intellectual resources.

So the primary way non-urban towns benefit from those resources is when people come back home.

In fact, this phenomenon — called “return migration” — was the reason Cromartie and his fellow researchers visited so many high school reunions. Cromartie said he wanted to know if cultivating return migration could be an economic development strategy.

The researchers learned that these return migrants come back to fill professional jobs that are hard to fill. They come back with life experiences to spur economic growth. And they come back because they care about the people at home.

The researchers found that almost all the returnees still had family in town, and when they came back, they felt the need to give back to their community with the skills and experiences they accrued elsewhere.

One of the respondents told the researchers of the decision to return, “I think it was going away, coming back, and seeing that need, that people really needed to be helping in the community.”

In addition, some returnees felt they were bringing back new perspectives to people in their hometown, which in most cases were well received.

A lot of our current leaders … have never … lived abroad to experience that. … There is a different idea base and different ways to look at things … and I think it is something that we can bring to the table.

In raw numbers, this phenomenon of return migration isn’t common, but that’s the most common type of in-migration for small towns. You don’t often get random people moving to these places, so it’s returnees who fill that role. And research shows it typically happens in the late 20s to early 30s, after young people decide they’ve had enough of the city and move to the suburbs or back to their hometown.

But that migration pattern is swimming against the tide of broader forces — most notably, the recent trend of fewer millennials moving.

As a nation, the United States is at an inflection point: After 100 years of Americans moving more and more, we’re now moving less.

In this low-migration period, virtually all age cohorts have been less mobile. And that includes people in their peak migratory years which, right now, happens to be millennials. These are the people who would normally return.

To be clear, this doesn’t mean millennials are doing something different that any other age cohort. They’re just caught in an era of dampened migration:

“Here’s the snag with the millennials,” Johnson, the demographer, said. “Every thing that normally would happen in your late 20s and early 30s has slowed down.”

Sure, millennials are less tied down than before; compared with previous generations, they are less likely to be married, have a child, and own a home. But as Pew Research Center’s Richard Fry points out, one of the main reasons people move is to buy a home. And since the recession, Americans as a whole are much less likely to do that.

Ultimately, while we don’t yet have the granular data to back this up, Cromartie speculates fewer people are coming back with the human capital these towns so desperately need. This means that for the first time ever, these nonmetro areas are losing population.

In Hollowing Out the Middle, written nearly eight years before Donald Trump’s rise, Carr and Kefalas preface the book with this:

In many ways the travails of hollowing out small towns and their Main Streets were an ominous harbinger of economic hard times to come. It is unfortunate that so few people were paying attention that the warning slipped by unheeded.

I talked to several people for this piece, formally and informally, and almost everyone who grew up in a small town or Middle America seemed to imagine a specific person who stayed at home and didn’t reach their full potential. Maybe it was the varsity quarterback or the prom queen or our best friend.

And there’s a certain tension there.

People who stayed at home tend to be younger, whiter, and more male. This is a group that has gotten their fair share of privilege in this country. And in broad, sweeping statistics, it’s a group that holds more regressive views toward marginalized people, including immigrants, minorities, and women. And yes, these factors likely played a bigger part in Trump winning the presidency than economic reasons.

But in that same sweeping vein, it’s also a group that didn’t get the bulk of resources growing up, a group that was encouraged into a life path that kept them near home, and a group that is now suffering. Other than their support for Trump, one split that stands out is what percentage of people have attended the funeral of someone under 65 — and this split is across all people, including those who stayed in their urban hometowns.

People who stayed had a 33 percent greater chance of having to attend a funeral of someone under the age of 65 compared to those who left home.

In a very literal sense, this is a split between people who have seen the broad and eclectic world with their own two eyes and taken advantage of diverse geographies — and those who have not. These experiences, or lack thereof, shape our outlooks, outcomes, and attitudes.

For some, that’s a choice. For others, it’s the product of the way we sort people in this country.

Clarification: As economist and migration expert Lyman Stone pointed out to me with charts and data, decreased migration isn’t a generational trend. He wrote in an email, “Millennials get hammered because they happen to be the ones hitting their peak migratory years during a period of low migration.” I’ve changed the piece to make this point clear.