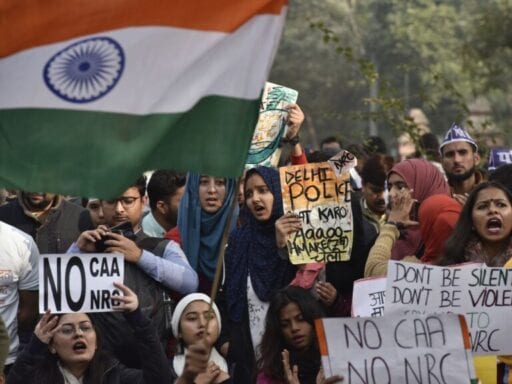 Over 20 people have been killed and more than 1,500 arrested as the Indian government cracks down on citizens protesting a new citizenship bill.

Protests erupted throughout the country following passage of the Citizen Amendment Bill (CAB) on December 11 by India’s parliament. The bill clears a path to citizenship for Hindus, Sikhs, Buddhists, Jains, Parsis, and Christians who came to India from Afghanistan, Bangladesh, and Pakistan.

It does not do the same for Muslim immigrants, however, which has caused its critics to call it a discriminatory threat to democracy that violates the secularism enshrined in India’s constitution.

Initial protests were held by students and youth living in country’s larger cities, but anger over the bill has grown in recent days, leading the demonstrations to become more widespread. Protests have been held all over the nation, from Bangalore in the south to New Delhi in the north.

The protests in the northern state of Uttar Pradesh have drawn particular attention for the casualties sustained there — according to the Associated Press, 15 people were killed in the state’s protests Friday and Saturday, including an 8 year old boy.

The state is India’s most populous, home to 204 million people, with a large population of Muslims; it is also notably controlled by Prime Minister Narendra Modi’s Bharatiya Janata Party (BPJ). Both Modi and the BJP has been vocal proponents of the Citizen Amendment Bill.

The government has responded to the protests with mass arrests — more than 1,500 have been arrested in the first 10 days of protest, and police say another 4,000 were detained and released. On Saturday, in Uttar Pradesh alone more than 600 people were detained (but not arrested) as part of what law enforcement officials called a “preventive action.”

The government has also cracked down on media, directing television stations not to broadcast content that could heighten tensions, and has also shut off the internet in certain locales, including the Muslim heavy states of Uttar Pradesh, West Bengal, and Assam, as well as in the cities of New Delhi and Aligarh. And in some states, including Uttar Pradesh, officials have also tried to limit demonstrations by invoking Section 144, a British colonial law barring public gatherings of more than four people.

These measures have drawn condemnation from protesters; after a police crackdown on demonstrators at a New Delhi university, one woman asked: “Is this democracy? Where are we living?”

The protests come amid rising tensions as Modi and his party — which controls the Indian government following a historic victory in May’s elections — enact policies critics see as anti-Muslim.

Modi has long promoted Hindu nationalism, and has used his new mandate to make radical changes affecting his Muslim constituents, from taking away the semi-autonomous status of majority-Muslim state Kashmir (and enforcing that decision with thousands of troops) to his recent rollout of an initiative tied to the CAB: the National Register of Citizens.

As explained by Vox’s Sigal Samuel:

The CAB has many Muslims frightened in part because it’s closely linked with another contentious document: India’s National Register of Citizens (NRC).

The NRC is part of the government’s effort to identify and weed out people it claims are illegal immigrants in the northeastern state of Assam. India says many Muslims whose families originally came from neighboring Bangladesh are not rightful citizens, even though they’ve lived in Assam for decades.

When the NRC was published in August, around 2 million people — many of them Muslims, some of them Hindus — found that their names were not on it. They were told they had a limited time in which to prove that they are, in fact, citizens. Otherwise, they can be rounded up into massive new detention camps and, ultimately, deported.

So far, this measure affects potentially 2 million people, not all 200 million Muslims in India. However, Modi’s ruling Bharatiya Janata Party (BJP) has said it plans to extend the NRC process across the country.

The looming threat of the internment camps, and concerns both over citizenship and the general direction Modi’s government seems poised to take the nation in have a number of India’s 200 million Muslims — and their allies of other faiths — deeply concerned.

The protest movement these concerned citizens have launched represents the largest rebuke of Modi since he became prime minister in 2014. But as Vox’s Samuel notes, the CAB and NRC are in essence in keeping with both with Modi’s politics and promises he made during the most recent campaign cycle:

Modi champions a hardline brand of Hindu nationalism known as Hindutva, which aims to define Indian culture in terms of Hindu history and values and which promotes an exclusionary attitude toward Muslims. UN human rights chief Michelle Bachelet recently expressed concerns over “increasing harassment and targeting of minorities — in particular, Muslims.”

Under Modi, vigilante Hindus have increasingly perpetrated hate crimes against Muslims, sometimes in an effort to scare their communities into moving away, other times to punish them for selling beef (cows are considered sacred in Hinduism). And this summer, Modi erased the statehood of Jammu and Kashmir, India’s only Muslim-majority state, which had previously enjoyed considerable autonomy over its own affairs.

Muslims comprise approximately 14 percent of the national population. and more than twice that in Assam state. In the 2019 Indian election, one of Modi’s central campaign promises was that he’d get the NRC in shape and deal with the Muslim migrants in Assam once and for all. Other BJP members have used dehumanizing language to describe the Muslims there.

As the protests continue in India, outside the country observers are warning Modi’s government that its policies could lead to a massive humanitarian disaster: Together, the NRC and the CAB could potentially create tens thousands of stateless Muslim refugees — if not more. These stateless people could find themselves incarcerated in Indian detention centers, or could flee to nearby nations, one of which — Bangladesh — is already struggling with a refugee crisis.

The United Nations, Human Rights Watch, and the US Commission on International Religious Freedom have all cautioned the Indian government about the policies.

But Modi is pressing ahead, and celebrating the CAB’s passage. He tweeted the bill making it through parliament made Wednesday “A landmark day for India and our nation’s ethos of compassion and brotherhood!”

As impeachment looms, Rudy Giuliani’s Ukraine conspiracies are getting more outlandish
How McKinsey infiltrated the world of global public health
How to watch FBI agent Peter Strzok’s testimony in front of Congress
5 first-time protesters on why they showed up for Black lives now
The legacy of Katherine Johnson, NASA’s “Hidden Figures” mathematician
The Food Network thinks you’ll pay $7 a month for a digital version of the Food Network