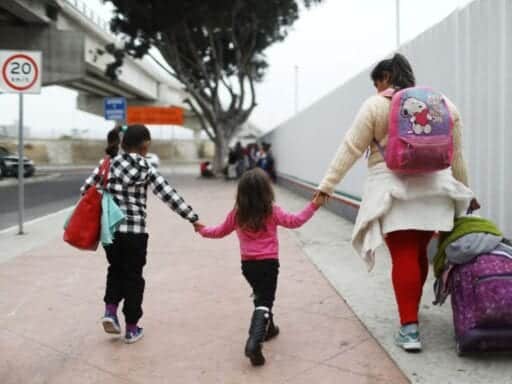 The Pentagon is preparing to potentially house 20,000 child migrants on US military bases.

This sounds abnormal, and it is. But this isn’t the first it’s happened: Military bases housed around 7,000 migrant children in 2014 under President Barack Obama.

It may happen again: According to multiple reports, the Department of Health and Human Services asked the Defense Department on Thursday to make plans to receive and care for around 20,000 migrant children and their families. The Pentagon will now decide if it has enough beds at military installations “for occupancy as early as July through December 31, 2018.” The Pentagon also told Congress that it will check to see if it “possesses these capabilities.”

New York Sen. Chuck Schumer, the top Democrat in the Senate, is unsure the Pentagon can meet the request. “The Department of Defense has been asked whether it can house 20,000 unaccompanied children between now and the end of the year,” the senator said. “Is it even feasible?”

Something like this has been in the work for weeks. Government officials visited three military bases — Fort Bliss, Dyess Air Force Base, and Goodfellow Air Force Base, all in Texas — last week to see if they could potentially house the children.

But it’s unclear if the Defense Department will actually end up hosting the minors. On Wednesday, Secretary of Defense Jim Mattis struggled to answer straightforward questions about what role, if any, the Pentagon would play in the ongoing immigration crisis. “I’ve been working on other things today,” the secretary responded to a reporter’s question on the immigration issue.

Still, the policy of keeping children at military installations has its critics.

It “provides for the possibility that children will be locked up in a family unit in a jail or prison or former military base (internment camps),” Maureen Franco, who heads the federal public defender’s office in El Paso, told the Daily Beast on Thursday. “It places enforcement of border laws ahead of decency and is no solution to the current situation.”

At this point, it seems like putting unaccompanied minors near American troops, and hoping they’re cared for, is the currently prescribed solution.