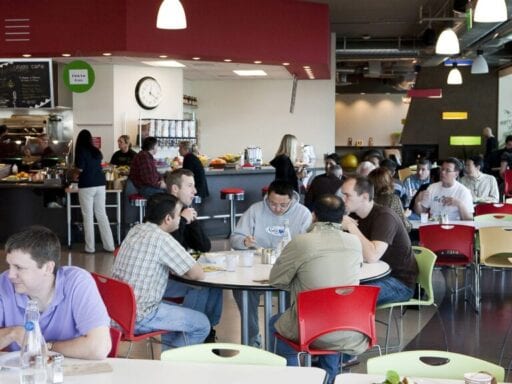 Around 2,300 contracted workers who serve meals to Google employees in the San Francisco Bay Area have unionized, saying they’re overworked and underpaid.

Around 2,300 cafeteria workers who work at dozens of Google campuses in the Bay Area, including the search giant’s main headquarters in Mountain View, have unionized.

The workers — who include dishwashers and food preparers who serve breakfast, lunch, and dinner for Google employees — voted last month to form a union after a campaign that’s been two years in the making, according to a source involved in the campaign. Their organizing has gone largely under the radar even amid other high-profile worker activism at Google in the past year, which has included employee protests about sexual harassment, the company’s work with US immigration agencies, and allegations that the company retaliates against employees for reporting HR issues. But the cafeteria workers’ unionization is some of the most significant union activity tech industry workers have ever accomplished — particularly for service workers who operate as part of Google’s vast “shadow workforce” of contractors who largely receive lower pay and fewer benefits compared to the company’s full-time employees.

The workers who voted to unionize earn wages that start at around $35,000 a year, according to a source familiar with the matter. And they don’t receive benefits such as unlimited PTO and retirement plans that are standard for full-time Google employees. Their move to organize represents a symbolic pushback against the status quo of growing economic inequality in Silicon Valley, where all but the top 10 percent of income earners have seen their wages decline from 1997 to 2017.

The cafeteria workers are organizing with a local chapter of the union Unite Here, which represents some 300,000 workers in the hotel, food service, laundry, warehouse, and casino gaming industries nationally in North America, according to its website. An arbitrator officially recognized that a majority of the workers at cafeterias across Silicon Valley voted “yes” to union representation on November 20 of this year, according to a union flyer that Recode reviewed. Since Google contracts these on-site food service workers via a third party, they are technically employed by the multinational food service firm Compass Group, which staffs many of Google’s cafeterias through its subsidiary, Bon Appétit Management Company. Compass Group and the union are now in the process of negotiating a contract, according to sources.

“We’re fed up and want change because at one of the richest companies in the world, we’re being overworked and underpaid,” the source involved in the campaign told Recode. “The disrespect from management is just adding insult to injury,” they added, alleging that in organizing meetings, some workers shared stories of being bullied, sometimes subject to “casual racism,” and pressured to work overtime without pay by Compass management.

A representative for Unite Here declined to comment on the union organizing.

“As an organization, Compass Group firmly believes each of our associates has the right to make an informed decision about whether they want to be represented by a third party such as a labor organization,” a spokesperson from Compass Group emailed Recode in response to a request for comment. “If they do, Compass Group will meet with the union and engage in good faith bargaining with the goal of achieving a mutually satisfactory agreement as we have done at Google Mountain View.”

With regard to the allegations that management has mistreated employees, a spokesperson wrote that the company is “committed to creating a positive, fair and rewarding work environment, and one in which every Compass Group associate feels empowered to discuss any and all workplace issues.”

A spokesperson from Google shared the following statement with Recode: “We have worked with Compass for many years and they’ve done an excellent job operating many of Google’s cafes. We work with lots of partners, many of which have unionized workforces and many of which don’t. We’ll continue to partner with Compass.”

Service workers in the tech industry, particularly in the San Francisco Bay Area, have long seen stagnating wages that haven’t kept up with skyrocketing housing prices. In Silicon Valley, where Google’s campuses are located, the cost of living is currently the highest in the entire US, around $2,911 a month for an apartment, according to a recent estimate from the Silicon Valley Institute for Regional Studies. The situation has become so dire that an ad hoc RV camp formed outside Google’s headquarters, where some tech employees including Google’s own contractors are living. In June, Google announced it would invest $1 billion in land and building homes to help ease the crisis. Facebook and Apple have also made commitments of around $1 billion and $2.5 billion, respectively, to address California’s housing crisis that many say has been driven in large part by the growth of major tech companies. But it could take years before residents see any meaningful results from these efforts, and in the meantime, service and retail workers, along with teachers, firefighters, law enforcement officers, and other non-tech employees, are finding it increasingly difficult to afford to live in their communities.

In recent years, Google and other major tech companies have faced scrutiny for the vast differences in the labor conditions for full-time employees versus contracted workers. At Google, contractors make up around half of the company’s total workforce and are called “TVCs” — temps, vendors, and contractors.

The complaints TVCs have aren’t just about pay, but also working conditions. Many TVCs say they’re bound by forced arbitration agreements, meaning they can’t take their employer to court over workplace issues like sexual harassment. While Google eliminated forced arbitration in its own employment contracts following employee protests, contractors can still be subject to such agreements with the third-party companies that hire them to work at Google.

Some tech contractors have successfully unionized in the past. Back in 2017, around 500 food service workers organized at Facebook’s Menlo Park offices with Unite Here Local 19, the same group currently organizing workers at Google. That union negotiated a five-year contract that included $4.75 per hour in raises, as well as health care coverage and a benefit pension plan. And thousands of security officers working at hundreds of offices in Silicon Valley, including major tech companies like Facebook, Cisco, and Genentech, unionized with SEIU in 2017. Shuttle drivers who help transport employees of companies like Facebook and Apple have been organizing with the Teamsters in the past several years. And in August, a group of around 80 Google contractors in Pittsburgh voted to unionize, drawing attention to the divide between these workers and their full-time counterparts.

But now, these roughly 2,300 cafeteria workers unionizing at Google’s Silicon Valley campuses represent one of the largest bargaining units of workers at a single major tech company — and a serious demonstration of the strength of a growing labor movement in tech.

Their organizing also comes at a time when Google’s white-collar workforce is increasingly participating in union organizing efforts, despite Google leadership’s attempts to crack down on employee dissent. In October, Google workers held a talk about unionization in Switzerland despite management’s attempts to cancel the meeting, as Recode first reported. Around a month later, Google employees discovered that the company was meeting with an anti-union consulting firm. And shortly before the Thanksgiving holiday, Google fired four employees who say they were retaliated against for their union organizing. The Communication Workers of America union filed a complaint on behalf of these four in December with the National Labor Relations Board, which has since launched an investigation. And earlier this month, another former Google employee came forward to say she was fired for her internal organizing efforts. Google denied that it has fired employees for organizing, and said that it terminated the employees for breaching the company’s data security policies.

Some white-collar tech worker activists say unions aren’t necessary to achieve some of the untraditional demands, such as canceling what they view as unethical projects to build technology for warfare and to support US immigrant detention camps. And in the face of apparent recent white-collar organizing suppression by Google’s management, some have doubted the viability of forming a well-organized union.

“I think this is a very symbolic and important push,” said Veena Dubal, a law professor at UC Hastings who studies labor organizing in the tech industry. “The fact that this union was able to organize these very precarious workers, in a large tech company that’s already getting heat for their labor practices with their own employees — it’s such a big deal that it could really push the conversation about tech and labor practices more broadly.”

Bernie Sanders’s Fox News town hall wasn’t a debate. Bernie won anyway.
Why Uncle Drew looks to be a summer sleeper hit
The Fox News moment that revealed a dangerously confused president
The US embassy in the UK is telling Americans to “keep a low profile” during Trump’s visit
San Francisco Pride voted to ban Google and YouTube from its parade
Companies bringing in new leaders to help with race might also be setting them up to fail