Thousands of Trump supporters stormed the US Capitol 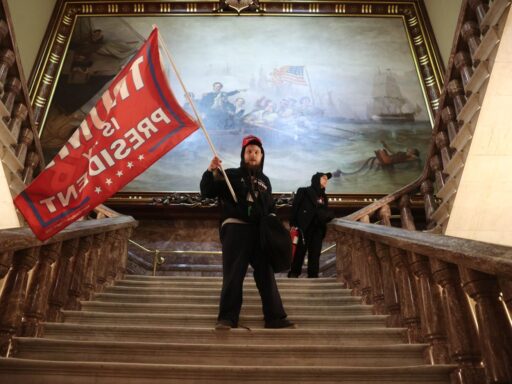 Trump told the protesters to head to the Capitol Wednesday afternoon.

Debate over the congressional certification of the 2020 election results was stopped abruptly on Wednesday when senators were told, “Protesters are in the building.” Vice President Mike Pence, who was presiding over the session, was swiftly escorted from the Senate chamber.

The protesters, supporters of President Donald Trump, clashed with US Capitol Police officers on the grounds of the Capitol building Wednesday afternoon, as lawmakers worked within to certify President-elect Joe Biden’s Electoral College win.

However, several hundred of the supporters did not wait that long and began to march to the Capitol area before the conclusion of the president’s speech.

The Washington Post’s Rebecca Tan reported that the Trump supporters were met with barricades which they destroyed. They proceeded to fight with police, according to the Huffington Post’s Philip Lewis, who shared video of police working to reestablish control as Trump supporters shouted at them, with several appearing to tell various officers they were “fucking traitor[s].”

As lawmakers and others were moved to safety, protesters continued to fight police, according to the Huffington Post’s Igor Bobic, who reported that as altercations subsided, there was “confederate flag flying outside the Senate chamber.”

Lawmakers responded to the protest — and to the battles with police — with disbelief; Rep. Haley Stevens (D-MI) wrote on Twitter, “I’m sheltering in place in my office. The building next door has been evacuated. I can’t believe I have to write this.”

Until it stopped progress, the chaos outside the chamber was reflected in intense debate within; as Trump supporters fought with law enforcement, GOP lawmakers issued their first of several planned challenges to the election results, claiming that there were irregularities with Arizona’s vote count.

As Vox’s Andrew Prokop has explained, for any objection to be considered, it must be raised by both a member of the House of Representatives and by a senator; this condition was met as soon as the issue of Arizona’s results was brought to the floor, and the consideration of the challenge was met by loud applause from Republican lawmakers.

It’s expected to be the first of at least three challenges — all of which are expected to fail, as a majority of the House and Senate must vote in support of any challenge for it to succeed. Democrats hold the majority in the House; and several Republicans, including Sens. Mitt Romney and Lisa Murkowski, have said they will not vote for any objection.

As Vox’s Li Zhou has reported, the debate over whether to object to the certification of the Electoral College vote, one of the final steps constitutionally required to close a presidential election, has divided the Republican Party. On one side are moderates like Romney and Murkowski, as well as most of the caucus’ Senate leadership; and on the other are more radical members, many of who, and Zhou has explained, have an electoral incentive to be seen as aligned with Trump.

This schism was on display at the protests, with Sen. Todd Young (R-IN) — who did not sign on to the plan to object to the results — being interrogated by Trump supporters who felt he was failing in his duty.

RT @rebtanhs: Republican senators are being swarmed by Trump protesters on the Hill. Here’s an exasperated @SenToddYoung saying he won’t vote against certifying the election.

“I took oath under God… does that still matter in this country?” pic.twitter.com/VMlvMZJcFm

Romney faced a similar questioning recently on a flight to Washington.

The rancor displayed by the Trump supporters at Wednesday’s rally would appear to be, in some ways, a reflection of concern felt by a broad section of the Republican base. A Morning Consult poll taken in December 2020 found 68 percent of Republicans do not believe November’s election was free and fair; nearly 40 percent of Republicans said the president should not concede — regardless of the actual results of the election.

In a statement released Saturday, a group of 11 GOP senators — led by Texas’ Sen. Ted Cruz — used polling such as this as justification for their decision to object to certifying Biden’s win, writing, “Reuters/Ipsos polling, tragically, shows that 39% of Americans believe ‘the election was rigged.’ That belief is held by Republicans (67%), Democrats (17%), and Independents (31%).”

But as Cameron Peters noted for Vox, while the polling done by Morning Consult, Ispos, and others is accurate, the distrust Republicans have for the November election stems completely from Republican leaders. The rally is proof that there is real anger about the election’s results, and some observers have ascribed Republicans’ double loss in Georgia’s Senate races Tuesday to distrust in the process.

But that anger and distrust has come from Trump, who has repeatedly cast the election as fraudulent and those who ran it as corrupt. This messaging has been taken up by a number of Republican senators, and by personalities in conservative and far right media outlets.

Any violence that might arise, and any distancing from the democratic process isn’t organic — it was engineered by the president and by his party.

Trump isn’t making America’s ventilator shortage any easier
These 11 Vox podcast episodes give more context to the protests happening across America
NCAA athletes could now receive more compensation, but with limits
Will the worst downturn since the Great Depression last as long?
Omar al-Bashir, deposed president of Sudan, has been sentenced to 2 years in a reform facility
Mask mandates are crucial for fighting Covid-19. How should they be enforced?