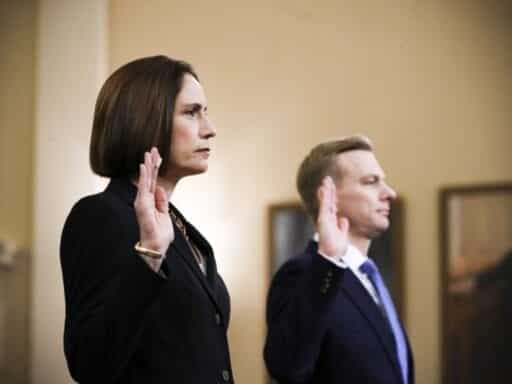 Share
Loading...
Fiona Hill, the National Security Council’s former senior director for Europe and Russia, and David Holmes, an official from the American embassy in Ukraine, are sworn in before testifying before the House Intelligence Committee on November 21, 2019. | Drew Angerer/Getty Images

Gordon Sondland and Kurt Volker were not telling the whole truth.

Fiona Hill, formerly the senior director on the National Security Council responsible for coordinating US policy on Europe, and David Holmes, a counselor for political affairs at the US embassy in Kyiv, both told lawmakers the administration’s pressure campaign to get Ukraine to probe Burisma was really all about Joe and Hunter Biden.

Toward the end of the Democrats’ questioning of the witnesses, the Democrats’ counsel Daniel Goldman asked, “Was it apparent to you that when President Trump, Rudy Giuliani, or anyone else was pushing for an investigation into Burisma, that the reason why they wanted that investigation” was to look into the Bidens?

“It was very apparent to me that that was what Rudy Giuliani wanted, yes,” Hill responded. Holmes agreed. And then when counsel asked, “Do you think that anyone involved in Ukraine matters in the spring and summer would understand that as well?” Holmes also said “yes.”

Fiona Hill and David Holmes testify that they understood that Trump pushing for an investigation of Burisma was code for the Bidens.

Kurt Volker and Gordon Sondland testified that they did not realize that Trump pushing for an investigation of Burisma was code for the Bidens. pic.twitter.com/A4Hqvv2snM

This is damaging for two previous witnesses in the impeachment hearings: former special envoy for Ukraine Kurt Volker, and US Ambassador to the European Union Gordon Sondland. Both those officials were central to the scheme to pressure Ukraine into opening investigations in the Bidens and Democrats in exchange for nearly $400 million in military support and a White House meeting. If anyone would know the true meaning behind “Burisma,” it would be them.

But both testified this week — under oath — that they didn’t make the Burisma-Biden connection. “I was not made aware of any reference to Vice President Biden or his son by President Trump” until the summary of a July 25 call between Trump and Ukrainian President Volodymyr Zelensky was released on September 25, Volker said on Tuesday. “Apparently, a lot of people did not make the connection,” Sondland told Congress the next day. “I didn’t.”

Those assertions were always hard to believe, even for some Fox News personalities. “They both knew that the president and Giuliani were demanding this investigation of Burisma, that they never associated it with the Bidens,” Chris Wallace said on Wednesday. “If they didn’t, they seem to have been the only people in the government who didn’t.”

Hill and Holmes just confirmed that. While not involved in the pressure scheme, both officials worked every day on Ukraine policy and were aware of what Trump and his allies were up to. Hill even mentioned that Giuliani “repeatedly” made the connection himself in public.

Especially after Thursday’s testimony, it’s not really credible that Volker and Sondland didn’t know what Burisma was code for. What’s almost more damning is that they evidently didn’t search the internet for why that Ukrainian company was so central to the administration’s supposed anti-corruption efforts.

Believing their account, in light of Thursday’s testimony, means accepting that everyone knew what Trump was after — except two of the top people helping him achieve it.

Tulsi Gabbard vs. the DNC: her complaint about debate exclusion, explained
Some sage advice for Donald Trump about picking a fight with Bob Woodward, from Donald Trump
4 key Kentucky primary races to watch on Tuesday
China has quietly vaccinated more than 100,000 people for Covid-19 before completing safety trials
Russian pop star tied to Trump pokes fun at collusion in new music video
Trump’s climate change reading material is beyond parody