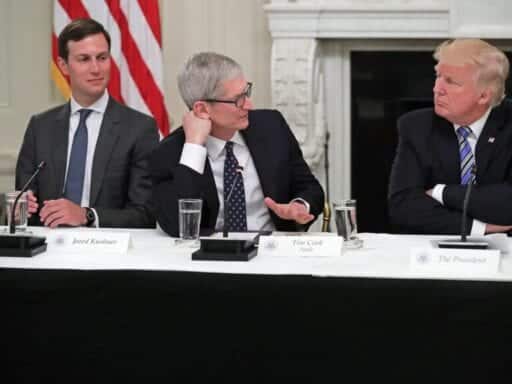 Share
Loading...
Apple CEO Tim Cook talks to President Donald Trump as the president’s son-in-law, Jared Kushner, looks on, at a meeting in the White House in 2017. | Chip Somodevilla/Getty Images

Trump keeps saying Apple just opened a plant in Texas. The problem: The facility in question has been around since 2013.

Facebook’s Mark Zuckerberg raised eyebrows this week after a new report that he had a private dinner with President Donald Trump in October, the second closed-door meeting between the pair in a month. But Zuckerberg is hardly the only tech executive trying to curry favor with the president: Apple’s Tim Cook is doing something similar, and unlike the Facebook executive, he’s doing it out in the open.

Remember Tim Apple — the alter ego Trump created for the Apple CEO earlier this year? Well, he’s struck again. And he’s letting the president blatantly lie about the goings-on at his company in order to use Apple as a marketing tool for his presidency.

On Wednesday, Cook accompanied Trump, Treasury Secretary Steve Mnuchin, and the president’s daughter, Ivanka Trump, on a tour of a manufacturing plant in Austin, Texas. Both at the plant and after, the president suggested that the plant had just opened and that it was the result of his presidency. No one at Apple corrected him, even though it’s not at all the case: The plant, which is run by a company called Flex, has been making Mac Pro computers there since 2013.

“For me, this is a very special day,” Trump said on the factory tour, apparently indicating the plant had just opened. Cook spoke after him and didn’t clarify what was going on, instead thanking the Trump administration, particularly those in attendance. “I’m grateful for their support and pulling today off and getting us to — this far. It would not be possible without them,” he said.

You could argue that Cook wasn’t quite sure that the president was saying the plant had just opened. Also on Wednesday, Apple announced the start of construction on a new office campus in Austin, so maybe Trump was referring to that. (Also, Apple building a new campus in Texas is good!)

But later in the day, it became abundantly clear that Trump was, in fact, making up a plant opening — and Apple still isn’t saying a word about it. On Wednesday evening, Trump tweeted out a campaign video of himself with Cook at the plant and wrote that he had “opened a major Apple Manufacturing plant in Texas” that day. But it’s just not true.

It’s not new for Trump to lie; he does it a lot. But for one of the most valuable companies in the world to allow itself to be used as part of a false marketing campaign from the president of the United States is, to put it lightly, not great.

Apple did not return multiple requests for comment on the matter and Cook hasn’t commented on it publicly. He could do so easily, even from his Twitter account, which he used to tout the plant’s launch when it first started shipping back in 2013.

Tariffs are why Tim Cook is letting this slide from Trump

Cook isn’t letting Trump make things up about Apple because he’s polite — it’s because, business-wise, it’s advantageous for him to do it, particularly in the context of the trade war with China.

Trump has consistently pushed Apple to manufacture more of its products in the US, even though some of his policies have made it harder for them to do. As Jack Nicas at the New York Times lays out, Apple and the White House have been going back and forth for months over where the company’s new Mac Pro will be made. Apple says it needs waivers on the tariffs to make it in Texas, and Trump initially said no but eventually gave in. And so, the computers are shipping from the US, complete with an “Assembled in USA” tag.

Cook knows that’s what matters to Trump — and was sure to emphasize it on the manufacturing tour on Wednesday.

“We cannot be more proud of the product,” he said. “It’s an example of American design, American manufacturing, and American ingenuity.”

Tim Cook sometimes criticizes the White House. Other times, he looks like its chief marketing officer.

Cook and Trump have at times had an adversarial relationship, but as time has gone on, they’ve leaned into the mutually beneficial parts of their dynamic instead.

On the 2016 campaign trail, Trump called for a boycott of Apple, and he has consistently pressured it to make more of its products in the United States. After Trump was elected, Cook sent a memo to Apple employees that didn’t directly mention the president but took a clear stance against his divisiveness. Cook has criticized Trump’s immigration policies and been vocal on family separation. Apple also warned early on that Trump’s tariffs might force it to raise prices.

But whatever their differences, they haven’t kept Cook from Trump’s orbit. He’s met with the president in the White House and done public events with Ivanka Trump and the president. He sits on a workforce policy advisory board to the president.

In one meeting at the White House earlier this year, the president mistakenly referred to Cook as “Tim Apple.” It was an admittedly funny moment, and afterward, Cook played along, changing his Twitter name to Tim and the Apple logo. (He’s since changed it back.) Trump, on the other hand, lied and insisted he hadn’t made the mistake.

Cook appears to have decided that while he might not agree with the more unsavory parts of Trump’s presidency, there’s a lot the company he runs has to gain from it.

The tax cut bill Trump signed in 2017 has been a huge windfall for Apple. It allowed the company to bring back billions of dollars in cash it had stashed abroad, save billions of dollars in taxes, and return billions of dollars in savings to its shareholders via stock buybacks. Apple has delivered public thank-yous to Trump with splashy announcements about investments in the US, which Trump name-checked during his 2018 State of the Union address. Call it some mutual free advertising.

So sure, it’s easy to be mad at Zuckerberg for having dinner with Trump (which is honestly not that big of a deal, especially in comparison to letting Trump lie in campaign ads, or, you know, having built a platform that’s being used to do enormous damage to democracy). But we shouldn’t just let Cook slide. He is at the helm of an iconic American brand in Apple, and he’s lending it to Trump, who’s using it to make false claims to boost his presidency.