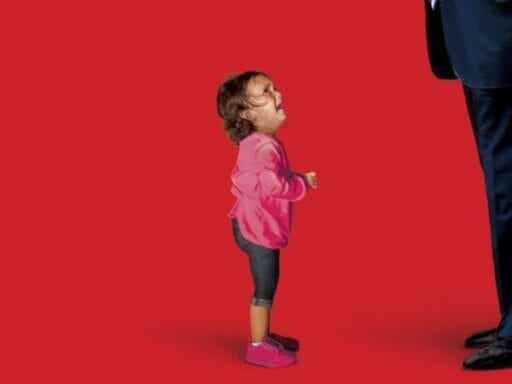 When a heart-wrenching photograph isn’t enough, it tells us something distressing about society — and media.

The cover of Time magazine’s July 2 issue — depicting President Trump and a crying immigrant child — is being shared at lightning speed across the internet, with people calling it “powerful,” “chilling,” and “bold social commentary.”

TIME’s new cover: A reckoning after Trump‘s border separation policy: What kind of country are we? https://t.co/U4Uf8bffoR pic.twitter.com/sBCMdHuPGc

This and other similar images from this scene went viral in the past week, with every major media outlet — print, online, and broadcast — using them to illustrate the impact of Trump’s “zero tolerance” immigration policy.

Moore went on the media circuit, discussing what he witnessed in great detail. “This one was tough for me. As soon as it was over, they were put into a van. I had to stop and take deep breaths,” he told Time. “All I wanted to do was pick her up. But I couldn’t.”

As a breaking news image, it did its job. America was sufficiently shocked, again and again and again. It moved people so much that they donated more than $17 million to RAICES, an organization providing legal services to immigrants along the Texas border.

But when I saw Time’s cover this morning — and what I can only describe as the misuse of Moore’s original image — my immediate reaction was rage. As a photojournalist, a visuals editor, and an immigrant, I didn’t see it as a powerful statement on President Trump’s attitude toward the family separation crisis or the policies that have ripped more than 2,000 vulnerable children from their parents.

I see it as an insensitive and exploitative play to sell magazines — and one that, albeit unintentionally, offers up this personal tragedy to be memed and ridiculed.

brb – Looking at memes of the new Trump TIME cover for the next 24 hrs. pic.twitter.com/9TzOswLqgo

“Nine days later … she’s on the cover of TIME”

Time’s post on “The Story Behind Trump’s ‘Welcome to America’ Cover” states:

Due to the power of the image, which appeared as critics from across the political spectrum attacked President Trump’s now-reversed policy of separating children from parents who are being detained for illegally entering the United States, TIME’s editors selected Moore’s photograph to create a photo illustration, including Trump, to make the July 2, 2018, cover of the magazine.

If the image was so powerful, then why not just let that moment be the cover?

It’s rare for photojournalists to capture the horror of a major crisis in one image — but Moore’s photograph did just that. And a nation responded to the crying little girl he documented. So why rip her out of the context of her story?

It was on June 12 when this two-year-old Honduran asylum-seeker was photographed by @jbmoorephoto, crying as her mother was detained near the U.S.-Mexico border. Nine days later—her image having helped force a president’s hand—she’s on the cover of TIME. https://t.co/DAtIpMoUUK pic.twitter.com/k3FRvqWpUw

Worse, Time seems to be patting itself on the back: “She’s on the cover of TIME,” Andrew Katz, Time’s deputy director of multimedia, tweeted. But does offering a crying 2-year-old this stage grant her more dignity, or is it for us — the easy juxtaposition of victim and perpetrator?

Vox’s Brian Resnick has written about the limits of human compassion and the impact an image can have. In it, he talks to Paul Slovic, a psychologist at the University of Oregon, who says:

Individual stories and individual photographs can be effective for a while. They capture our attention — they get us to see the reality, to glimpse the reality at a scale we can understand and connect to emotionally. But then there has to be somewhere to go with it.

Trauma lasts longer than a snapshot

I was separated from my mother for 18 months when I was a child, so she could come to the US from India to find a job, a car, and an apartment for us to live in. My father and I arrived when I was about 3 years old. I was loved, safe, and never alone, and yet I still have separation anxiety and residual trauma from that time.

My aunt says I remembered the car my mother left in for the airport. She recalled that every time I saw that car afterward, I would cry and scream and refuse to get in. I’m not at all equating what is happening to families on the border with my experience — I was safe and always with family — but this experience has had a lasting impact on my life, and it’s something I’m still trying to process decades later.

I became a photojournalist because I wanted to be a part of an industry that attempted to communicate the human experience. I’ve driven the US-Mexico border telling stories of everyday people forced into extraordinary circumstances. I know how hard it is to make an image that moves people to care about — much less take action for — someone they’ll never meet. But how far are we willing to go to let a 2-year old girl be the symbol of a national crisis?

Photojournalism, and journalism broadly, has always been intrinsically tied to the bottom line. “If it bleeds, it leads” is a longstanding newsroom adage used to describe what makes the front page. All too often, the news lives on the extremes of the human experience — there’s a reason we cover a conflict halfway around the world when war breaks out, then forget about it when peace comes. Likewise, when it comes to marginalized communities, we tend to focus on the tragic narratives.

In doing so, we’ve primed our audiences to accept this sort of imagery as an unflinching lens, as something noble, brave, and bold. But in reality, we have profited from the pain and suffering of black and brown people — calling it heroic journalism, while it’s created and edited by mostly white people. The sad reality is that all too often, if we are to feel anything for “the other,” it needs to be horrific. We need to see someone’s worst nightmare.

And if we as an audience — as citizens — want to become more compassionate, then we need to push back on the exploitation of personal tragedies and ask our media organizations that represent us to do better.

John Moore’s image should have been enough.

Why the US Army tried to exterminate the bison
USA TODAY and Gannett coverage of the 2016 elections
Federal eviction protections have ended, leaving renters scrambling
Ed Whelan, a top conservative activist, thinks he knows who really assaulted Christine Ford
For women, remote work is a blessing and a curse
ISIS-K, explained by an expert