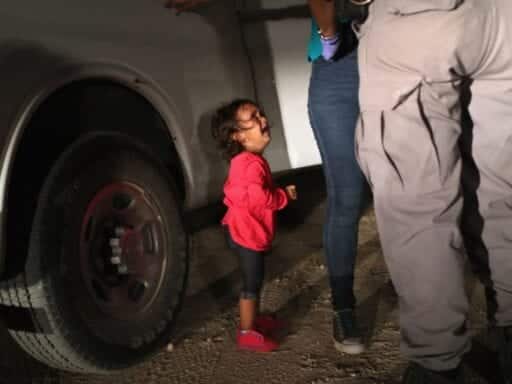 The crying girl on the magazine’s cover wasn’t separated from her mom at the border. But 2,300 other children were.

It became the viral symbol of Trump’s “zero tolerance” immigration policy: a toddler from Honduras in a pink sweatshirt, just taller than the knees of her mother, who’s being searched by border patrol agents. The girl’s face is frozen between a cry and scream, so intense you can almost hear it through the still photograph.

To many, the picture of the 2-year-old Honduran girl and her mother — taken by award-winning Getty photographer John Moore, who’s followed the border crisis for years — embodied the horror of Trump’s “zero tolerance” policy to prosecute all people crossing the border illegally, leading to the separation of families. It helped fuel the public outrage that forced Trump to backtrack by issuing an executive order to end the practice.

An interpretation of that photo made it on the cover of Time magazine, depicting the wailing girl looking up at Donald Trump, who loomed above her against a red backdrop. A caption read: “Welcome to America.”

It was on June 12 when this two-year-old Honduran asylum-seeker was photographed by @jbmoorephoto, crying as her mother was detained near the U.S.-Mexico border. Nine days later—her image having helped force a president’s hand—she’s on the cover of TIME. https://t.co/DAtIpMoUUK pic.twitter.com/k3FRvqWpUw

Except it turned out that the original photo wasn’t depicting a family separation at all. The mother, Sandra Sanchez, and the 2-year-old girl, Yanela, were never separated, something the girl’s father and Honduran and US officials confirmed Friday.

Time stood by its decision to use the photo on its controversial cover, but the White House and other critics seized on this as an example of “fake news,” a photo deliberately used to mislead the public about Trump’s policy.

As everyone’s arguing about a Time magazine cover, the crisis at the border is still unfolding. At least 2,300 kids have been separated from their families since May; according to federal officials, about 500 families have been reunited since Trump’s signed his executive order that will now seek to detain families together, indefinitely.

Moore’s photos, taken on June 12 at the border in McAllen, Texas, according to Getty, captured families being stopped by border agents at night. Moore, and the rest of the country, knew about the family separation policy when he encountered the family and snapped the photo. He told the Washington Post that he didn’t know the girl’s fate.

“I don’t know what the truth is,” Moore said. “I fear they were split up.”

The original caption attached to the photo in Getty Images — the service many publications (including Vox) use to find images to accompany news articles — didn’t say for sure whether the girl and her mother were separated. It mentioned only “possible separation”: “the asylum seekers had rafted across the Rio Grande from Mexico and were detained by U.S. Border Patrol agents before being sent to a processing center for possible separation.”

But the photo was used over and over to illustrate stories about the separation policy. At the time, the public outrage had exploded over Trump’s policy to separate families at the border in order to prosecute parents for the crime of crossing illegally. That image of the screaming toddler, combined with photos, mostly government-issued, of kids and teens in detention centers, sitting in cage-like enclosures or laid out on mattresses on the floor, was used to galvanize both Democrats and Republicans against administration’s policy.

The administration obfuscated about the reasons for family separation before finally caving to public pressure. Trump issued an executive order to end the policy this week. It was a rare public backtrack.

Still, the Time cover, released Thursday, juxtaposed the distraught child from Moore’s original image with an icy and imposing Trump. It was an artistic representation — though a divisive one.

Time also published an article about the image, which said the girl was taken away, screaming, by border patrol agents. That never happened: The toddler’s mother picked her up and they were both taken away together, according to correction posted in Time.

A border patrol agent first told CBS News on Thursday that the two were never split up. The girl’s father, who is still in Honduras, later said that mom and daughter stayed together, which Honduran and US officials confirmed.

Time defended the cover, even after the retraction on the article. Time editor-in-chief Edward Felsenthal said in a statement:

The June 12 photograph of the 2-year-old Honduran girl became the most visible symbol of the ongoing immigration debate in America for a reason: Under the policy enforced by the administration, prior to its reversal this week, those who crossed the border illegally were criminally prosecuted, which in turn resulted in the separation of children and parents. Our cover and our reporting capture the stakes of this moment.

But the White House and defenders of Trump’s policy seized on this, and the media saturation of this photograph, to illustrate stories about family separation. It was another example of “fake news” and “bias.”

It’s shameful that dems and the media exploited this photo of a little girl to push their agenda. She was not separated from her mom. The separation here is from the facts. Dems should join POTUS and fix our broken immigration system. #ChangetheLawshttps://t.co/Y6KrTp4Ulk

Does the Time cover falsely depicting the young girl as victim count as FAKE NEWS? When everyone agrees the cover is factually wrong the elite media can have a better sense why so many Americans are sick of the dishonesty and falsehoods. Time owes President Trump an apology.

Trump’s hardline approach to immigration is still intact. The mother and daughter were not separated, but the two are detained together in Texas as the mother’s immigration case plays out. Meanwhile, the Trump administration has proposed holding more families in detention together indefinitely.