Tiny Samoa has had nearly 5,000 measles cases. Here’s how it got so bad. 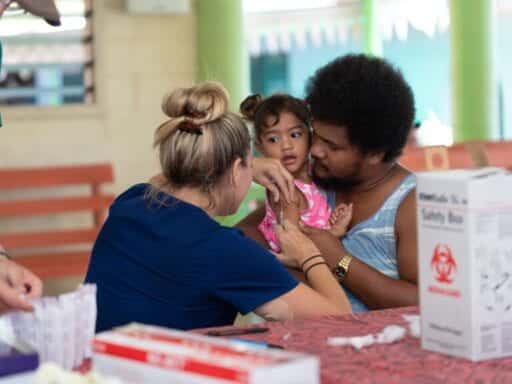 This island nation saw 70 measles deaths so far this year, most in children under age 5.

2019 has been a terrible year for measles — and it’s unfortunately ending with a devastating outbreak in Samoa.

On October 16, the ministry of health in the tiny Pacific Island nation sent notice of a measles outbreak within its borders. A month later, the Samoan government declared a state of emergency over the rapidly spreading virus, according to the World Health Organization (WHO). By December 10, Samoa had counted 4,819 measles cases, including 70 measles-related deaths.

In such a small country, almost everyone knows someone who has been affected, Sheldon Yett, UNICEF representative to the Pacific, told the BBC. “People are nervous, people are seeing the impact of this disease.” Most of the cases and deaths have occurred in small children, under the age of 5.

In response, Australia has been shipping child-size coffins to bury the dead. Schools across the island have had to shut down over the past couple of months, and public gatherings have been banned. The health system is strained trying to keep up with the onslaught of cases, and while there’s no tally on the cost of the outbreak, it’s sure to be huge.

So how did measles spiral out of control so quickly? It’s pretty simple: because not enough people were vaccinated.

According to the WHO, in 2018, the national rate of coverage for a single dose of the measles-containing vaccine was only 31 percent — a halving from about 60 percent in 2016.

That’s way too low for what’s known as herd immunity, or the percentage of people in a community that have to be vaccinated in order to keep the disease from spreading. With measles, around 95 percent of people need to be immunized in order to achieve herd immunity. That number is high because measles is so incredibly contagious; less transmissible diseases, such as polio, need a coverage rate of about 80 percent. This means Samoa has less than one-third of the necessary vaccine coverage rate.

The vaccine-related deaths of two children last July fueled skepticism about the measles shot. There wasn’t actually anything wrong with the vaccine. Instead, two nurses tainted the measles vaccine by mixing it with muscle relaxant instead of the required doses of water, and wound up in prison for manslaughter as a result, the Washington Post reported.

Still, the human error was interpreted by some as a systemic problem with the measles vaccine — a fear anti-vaccine activists seized upon to sow vaccine doubt.

“The anti-vaccine narrative took off — but there was another step there,” said Saad Omer, a vaccine researcher and director of Yale’s Institute for Global Health. At the time of the deaths, the government halted its measles vaccine campaign for 10 months while investigating the tragedy, against the advice of the WHO. “When you pause the program, it increases the number of [people susceptible to measles],” Omer added. So it’s no surprise, he added, that measles made inroads when the immunization rate plummeted.

Right now, a mass vaccination campaign is underway, and aid workers and measles experts from other countries, including the US, have traveled to the island to help.

Samoa is part of a broader trend

But what’s happening in Samoa is not an isolated case; it’s part of a broader trend. Measles vaccine rates have been stagnating globally while measles has surged around the world. In the first three months of 2019, there was a 300 percent rise in measles cases globally over the same period in 2018, according to the WHO. More than 140,000 people died from causes related to the virus in 2018, and cases have increased in all WHO regions since 2017.

The areas that have seen the biggest year-over-year surges include the African region (900%), the Western Pacific region (230%), and the European region (150%); the Democratic Republic of Congo, Liberia, Madagascar, Somalia, and Ukraine were among the countries most affected in 2018.

High-income countries have reported record measles cases, too. In the US, the Centers for Disease Control and Prevention announced they’d counted the greatest number of measles cases in nearly three decades by May, and by October, America nearly lost its measles-free status. (That status is conferred on countries without continuous measles transmission for at least one year.) Meanwhile, the United Kingdom, Greece, and Brazil lost their measles elimination status recently.

The reasons for outbreaks differ in each country. In the US, the UK, and Samoa, vaccine refusal contributed to the uptick in measles cases. In other places, it’s a lack of access to immunizations or civil unrest. “Wherever there is war and conflict or political destabilization we also see the return of measles, which explains the situation in DR Congo,” said Peter Hotez, the dean of the National School of Tropical Medicine at Baylor College of Medicine.

But it all adds up to a declining rate of vaccine coverage globally. And “policymakers have not really figured out a response,” Hotez added. He believes we’ll keep seeing more measles cases — from Samoa to the US. “In 2019, the WHO appropriately named vaccine hesitancy one of our top 10 global health threats. I’m afraid that will still be the case in 2020,” Hotez said. “I don’t see this trend improving any time soon.”

America now finally meets the bare minimum for coronavirus testing
The North Carolina gerrymandering chaos that could upend the midterms, explained
Read the full transcript of Trump’s North Korea summit press conference in Vietnam
Poland had some of the strictest abortion laws in Europe. They just got even stricter.
U.S. pulls out of UN Human Rights Council over accusations of 'bias,' protecting abusers
Live results for the New York primary elections