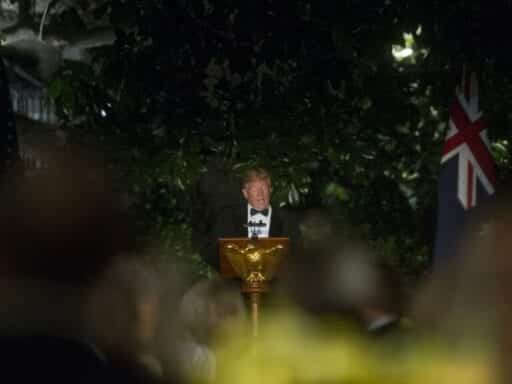 A veteran like Joe Biden risks letting Trump off the hook for corruption.

Donald Trump is likely the most personally corrupt individual to sit in the Oval Office.

But the issue hasn’t really broken through with the broader public. There’s been reporting on the facts of Trump profiting off the presidency. But as MAGA-hatted tourists outside the Trump Hotel in Washington tell me every time I ask them about it, they believe everyone in DC is profiting from their official position.

This is what’s fundamentally dangerous to Democrats about media scrutiny of Joe Biden’s son Hunter’s and his brother James’s attempts to cash in on the family name in their business dealings.

Trump’s attempt to smear Joe Biden with a claim of wrongdoing related to Hunter’s time on the board of a Ukrainian energy company appears to be completely baseless. And Trump’s apparent attempt to coerce Ukrainian officials into concocting an attack on Trump’s political opponents — seemingly by holding up congressionally appropriated foreign aid — is outrageous. (Just the latest in a long stack of clearly impeachable abuses of power.)

But the fact of the matter is that Hunter wasn’t on the board because of his expertise in Eastern European energy issues. He’s part of a long and perfectly legal tradition of family members of influential politicians profiting off a vague sense that it’s politically and economically useful to cultivate these connections.

That this kind of sleazy stuff has been going on for years doesn’t make Trump’s abuses of power okay, and it certainly doesn’t make his stepped-up and more-egregious forms of corruption okay. But Democrats are kidding themselves if they don’t think it helps explain why Trump’s corruption is tolerated.

And it’s a reminder of the commonsense reality that the normal way you try to win elections is to nominate a fresh-faced outsider who vows to clean up the mess in Washington, not a veteran of a system that’s widely hated.

Outsiders have an advantage

Before Trump hit the scene, Gallup polls showed that a large and rising share of the public (75 percent in 2014) felt corruption was widespread in American government.

Jan-Werner Müller, a Princeton political scientist who published an excellent book about authoritarian populist movements in late 2016, finds that Trump supporters’ indifference to Trump’s corrupt leanings is actually rather typical. Even when clear evidence of corruption emerges once an authoritarian populist regime is in place, the regime’s key supporters are generally unimpressed.

“The perception among supporters of populists is that corruption and cronyism are not genuine problems,” he writes, “as long as they look like measures pursued for the sake of a moral, hardworking ‘us’ and not for the immoral or even foreign ‘them.’”

George Mason University’s Justin Gest wrote a study of white working-class politics in the United States and United Kingdom before Trump’s election, and one of his major themes was that there is a pervasive cynicism about politics and government among the people he interviews.

“Today’s working-class Rust Belt voters are disenchanted by what they perceive to be a political and economic culture of exploitative greed and gridlock,” he writes, “and are waiting for someone to adopt their cause.”

The logic is simple: If politicians are all greedy corrupt jerks, then at least Trump is our greedy corrupt jerk. The one who validates our values and our worldview and our concerns and crushes our enemies. To beat him, Democrats want to convince Trump’s voters that he’s a false friend who’ll betray their interests — an argument they successfully made during the Affordable Care Act repeal debate and that helped Democratic congressional candidates win back critical groups of Trump voters in the 2018 midterms. Many of the candidates who won those races — regardless of their ideological positioning — were in some clear sense “outsiders” rather than entrenched members of the political establishment.

If you care deeply about the fine details of public policy, then it’s obvious that Reps. Abigail Spanberger, Colin Allred, Laura Underwood, and Jared Golden are very different from “the Squad” of left-wing Democrats who’ve become the most famous members of the freshman class in the House. But their existence is a reminder that the basic formula of young, fresh-faced outsiders who promise to come to Washington to shake things up works for people of all ideological persuasions.

That’s also the formula that fueled Barack Obama’s meteoric rise to the presidency in the mid-aughts. And it describes foreign center-left politicians like Justin Trudeau (Canada), Emmanuel Macron (France), and Pedro Sanchez (Spain). A different spin on the same phenomenon helps explain the appeal of old warhorses of the left like Sen. Bernie Sanders and British Labour leader Jeremy Corbyn — guys whose ideological commitments left them hanging around for decades in the vicinity of political power without ever getting enmeshed in the establishment nexus.

Of course, die-hard leftists face their own electoral challenges stemming from ideology and the tendency to take on extreme and unpopular policy positions. But moderates, precisely because they are moderate, are perpetually at risk of appearing corrupt because there isn’t necessarily a singular through line that explains their positions on everything.

Lots of Democrats trade on political office for personal gain

The bottom line of Ben Schreckinger’s Politico investigation into Hunter and James Biden’s business ventures seems to be that their personal connections to a powerful senator who became vice president may not have actually made a lot of money for their business partners. He found that Biden’s son and brother “have lengthy track records of making, or seeking, deals that cash in on his name,” although “there’s no evidence that Joe Biden used his power inappropriately or took action to benefit his relatives with respect to these ventures.”

Even when the ties get closer, you’d be hard-pressed to see actual corruption. It’s true, for example, that Hunter worked as a consultant for the major credit card issuer MBNA for five crucial years during the Bush administration when Biden was the main Democratic champion for a controversial MBNA-backed reform to bankruptcy law. But it would be silly to think that hiring Hunter was the reason Biden backed the bill.

MBNA was a major contributor to his campaigns, too. But more important, MBNA was headquartered in Delaware, and it’s banal for senators to carry water for home-state companies. But then again, it’s also banal for companies to donate money to candidates who carry water for them — and hardly unheard-of for companies to hire relatives of powerful political allies just as a kind of general favor. Why not build good will?

It looks to many people like the Obama administration’s economic policies were highly effective at rescuing the banking system but suspiciously less effective at restoring middle-class wealth. The key players involved all swear they accomplished everything they possibly could given the constraints of Congress. But it does seem a little suspect that Obama’s first treasury secretary, his first National Economic Council director, and his first Office of Management and Budget director somehow all manage to cash financial industry checks these days.

And speaking of congressional constraints, Evan Bayh, one of the leading moderate voices during Obama’s first two years in office, retired from the Senate in 2010 to go become a lobbyist. Fellow ex-senator Blanche Lincoln runs a boutique lobbying shop in DC called the Lincoln Policy Group. Max Baucus became the US ambassador to China and then launched the Baucus Group, which “provides consulting services to American and Chinese businesses and serves on the Board of Directors of Ingram Micro and the Board of Advisors to Alibaba Group.”

None of this is illegal or scandalous, it’s just business as usual. But that’s the point. Business-as-usual politics strikes most people as evidence of widespread corruption, undermines faith in the system, and makes complaints about Trump’s more egregious acts of corruption feel fake and hypocritical.

Let me be clear: If you are a single-issue “don’t let the president’s son do shady stuff” voter, and the choice on Election Day comes down to Donald Trump or Joe Biden, the correct choice is still Biden.

Moreover, there is a world of difference between setting yourself up with a boutique lobbying or consulting shop after your time in politics and getting paid by a few clients whose causes you think are reasonable and having a hotel in downtown Washington where you openly collect bribes from all comers. Beyond the corruption, Trump now routinely dabbles in abuses of power that should shock the conscience.

Specifically with regard to Hunter Biden and Ukraine, Trump was not conducting some kind of good government audit, he was holding core US foreign policy objectives hostage to his narrow self-interest. And this is something he does not just on extraordinary occasions but routinely. From Israel to India to Venezuela and beyond, Trump seems utterly incapable of viewing the public interest as having any standing or independent weight beyond his narrow politics. He quite openly believes that the entire Justice Department should serve his personal interests, rather than the interests of impartial justice, and his continued presence in office is a national scandal.

Given that reality, I — like a lot of other pundits — have repeatedly warned that it’s important to appeal to swing voters and that while some progressive ideas are popular, others are not. Avoiding unpopular ideas is a proven and time-tested means of winning elections.

But by the same token, there’s something perverse about moderate and allegedly electability-minded Democrats lining up behind a guy who was first elected to the Senate in 1972.

If “experienced Washington hand” were the best formula for winning elections, then Hillary Clinton would have won in 2016, and veteran senators would outnumber young governors among successful presidential candidates. Voters don’t like “the system,” and the baggage that comes with it. The best way, by far, to make Trump own his corruption is to pick someone from outside the swamp to run against him, rather than letting him continue to position himself as the scourge of the establishment.