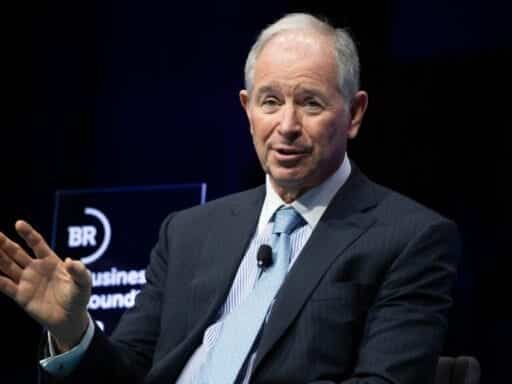 He’s an adviser to President Trump — but he also wants to see a national $15 minimum wage and an overhaul of the H-1B visa program.

Much of the world is transitioning to a knowledge economy, but far too few Americans have had enough education to prepare them for that shift, Blackstone CEO Stephen Schwarzman says.

“Most people don’t know that two-thirds of the workforce in the United States has a high school education or less,” Schwarzman said on the latest episode of Recode Decode with Kara Swisher. “Those people are not prepared for the modern world … it’s not the business community that created that. There’s a political problem.”

Schwarzman, a longtime adviser to President Donald Trump whose private equity firm manages $548 billion, focuses on personal advice in his new book What It Takes: Lessons in the Pursuit of Excellence. But on the new podcast episode, he shared a series of policy goals — including a national $15 minimum wage and public education reforms.

“Teachers are pretty poorly paid,” he said. “You see these demonstrations on television and strikes, and so I think we need to get teachers in a position where they can attract very high-quality people. One way to do that is to make teachers the only tax-exempt occupation in the United States.

“That would give them a very large boost in income just the day you did it,” Schwarzman added. “But the second benefit is that they would be marked apart as a prestige institution. When I was young, teachers were a big deal. And I wouldn’t be where I was without the education that I got.”

On the new podcast, Schwarzman also talked about how he would like to see America’s immigration policies reformed, and criticized Democrats for trying to “bundle” improvements to the H-1B visa program with policies that would address illegal immigration.

“They will not decouple the H-1B immigration issue from all the other issues,” he said. “By not doing that, you deny these very talented people staying in the United States. They go back to China, they go to India, they are our competitors. We’ve educated them and we haven’t let them stay. To me, this is completely nonsensical.”

Swisher challenged him on this point, arguing that “an overall respect for immigration” could be important to finding future innovators who lack opportunities such as a prestigious college degree. Schwarzman said fixing H-1B in isolation should be a “first step,” with “all kinds of other things that should be addressed in this area” to follow.

He also stressed the importance of the Deferred Action for Childhood Arrivals (DACA) program for young unauthorized immigrants, which Trump has been trying to end since 2017; the Supreme Court will consider the program’s fate in November. Schwarzman seemed optimistic that the children protected by DACA would get treated fairly.

“Nobody’s going to deport them basically because they have nowhere to go and they’re kids,” he said. “So this one to me … what are you going to do, drop them at airports?”

2018 primaries: Key takeaways as Democrats get a shock and Trump triumphs
Let Hong Kong move to America
Trump’s reckless Middle East policy has brought the US to the brink of war
US tops world in coronavirus cases, Boris Johnson has Covid-19: Friday’s coronavirus news
An easy way to make piglet lives better
The US won’t give visas to same-sex partners of UN officials anymore