Today is Black Women’s Equal Pay Day. Here’s what you should know about the gap. 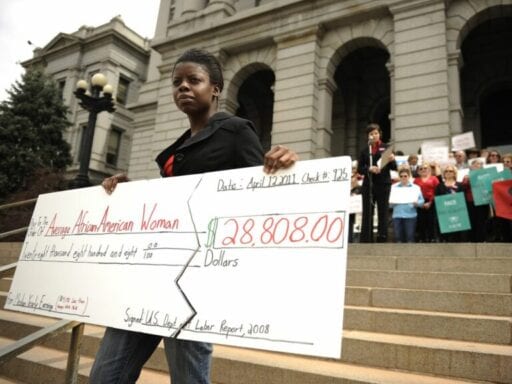 On average, black women had to work 20 months to match what a white man made in 12.

This year, Tuesday, August 7, is Black Women’s Equal Pay Day, which marks how long a black woman has to work into 2018 to catch up to the same amount a white man made in 2017.

The day is months later than National Equal Pay Day, which marks the same thing for women generally. This year, Equal Pay Day was on April 10, meaning that for women overall, it takes 16 months to match what white men make in 12.

But these numbers change considerably for women of color. Black women, for example, needed 20 months to reach equal pay. Native American women will hit equal pay on September 27, while Latinas will hit the benchmark on November 1. And while Asian-American women technically hit the equal pay mark on February 22, suggesting that this group faces the smallest gender pay gap of all women, that date overlooks significant disparities in pay among different groups of Asian women.

Attention to pay disparities has highlighted how black and Hispanic men make less than their white counterparts, and how women overall make less than men. But there has been a failure to fully grapple with what the pay gap looks like when both race and gender are taken into account. For example, even as white women lag behind white men in wages, they often do better than black or Hispanic men.

And these numbers have particularly overlooked women of color who face both racial and gender discrimination. It suggests that if conversations and policy addressing pay disparities are going to truly benefit all women, a more intersectional and nuanced understanding of the gender pay gap is needed.

Nationally, black women working in full time, year-round positions make 63 cents to each dollar earned by a white man. This gap is much wider than the 79 cents white women earn for every dollar made by a man and the 87 cents earned by Asian-American women (but again, there is significant variation among different nationalities of Asian women, with some earning far less than this average). And other groups, like Latinas and Native American women, experience a gap that is even larger, making 54 cents and 57 cents per dollar, respectively.

The National Women’s Law Center notes that this gap can begin to widen over the course of a black woman’s career, causing her to lose nearly $870,000 in potential earnings to the wage gap. And in several states, the wage gap can be even bigger. In Louisiana for example, black women make less than half of what white men make.

The gap in black women’s pay is due to several factors. A 2014 report from the National Women’s Law Center notes that women comprise some two-thirds of workers making $10.10 an hour or less, and of that group nearly half are women of color. Black women were overrepresented in the low-wage workforce according to the NWLC, making up 10 percent of low-wage workers but only 6 percent of the overall workforce.

Even so, the wage gap between black women and white men and women can’t be fully accounted for by differences in occupation or education. The gap opens up early. On average, black female college grads make 37 percent less than white males with the same level of education, and black women are also saddled with far more student loan debt than their white peers according to research from the American Association of University Women.

Black women with more education don’t just struggle to access many of the higher paying positions available to their white counterparts, they earn less than white men and women holding the same job, whether that job is part-time as a cashier or a salaried position as a business executive.

In some geographic areas, the gap is even wider. A recent report on the wage gap for black women living in New York City found that black women make roughly 57 cents to every dollar earned by a white man, a gap that is larger than both the national gap and the gap seen in the state of New York.

“In a city like New York that touts its progressive ideals, it is an outrage that Black women in 2018 are still denied economic equality,” NYC Comptroller Scott Stringer said in a statement about the report. Stringer offered a number of proposals to help reduce that gap, including raise wages, expand access to affordable child care and paid family leave, and improve enforcement of anti-discrimination policies. And some groups focused on the national gap have argued that unions are another way to help black women, pointing to data showing that unionized black women face a smaller pay gap.

Take, for example, sexual harassment in the workplace, an issue that particularly affects low-wage industries dominated by women of color. Experts have noted that lower pay levels for nonwhite women could play a role in their exposure to harassment, and a new NWLC report has found that from 2012 to 2016, black women filed workplace sexual harassment complaints with the Equal Employment Opportunity Commission at nearly three times the rate of white women.

“If you have no financial cushion, if you need every bit of your paycheck to make ends meet, you are even more vulnerable to the threat of retaliation, to the fear of losing your job,” Emily Martin, vice president for workplace justice at the National Women’s Law Center, told me last year.

But even conversations about workplace harassment and discrimination fail to acknowledge that women of color are more likely to be affected. It suggests that when we talk about the workplace, we are only having a partial conversation, which often overlooks how different groups experience their jobs.

That women of color make less than white men and white women isn’t just about pay, it’s part of a wider set of disparities facing women of color, particularly black women, in homeownership, unemployment, poverty, access to child care, and the ability to accumulate wealth. And given that black women are often the breadwinners for their families, these disparities affect more than an individual woman, they affect her entire household.

Black Women’s Equal Pay Day and the additional days that will mark equal pay for other nonwhite women this year are a reminder that women of color aren’t getting results that match their high level of participation in the workforce. And until this gap is included in public conversations about the pay gap and addressed in policy discussions, efforts to close the pay gap and other disparities will continue to overlook women of color, making the solutions proposed woefully incomplete.

5 ideas to reform the filibuster that Joe Manchin might actually support
Lindsey Graham has defeated Jaime Harrison, keeping his South Carolina Senate seat
A Supreme Court showdown over birth control got much messier Wednesday
4 ideas to replace traditional police officers
Baby bonds could shrink the Black-white wealth gap
No Time to Die tease looks like it will really be Daniel Craig’s last Bond