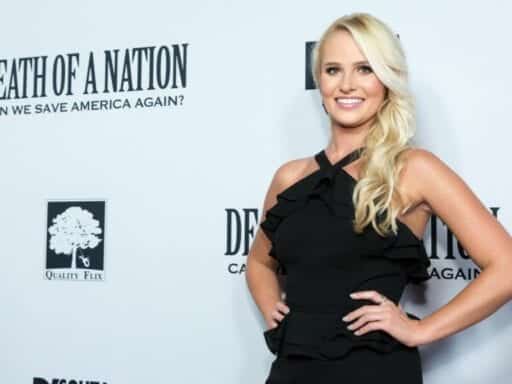 The Fox News personality collaborated with Alexo Athletica, an activewear company by a former NRATV host.

Fox News commentator Tomi Lahren has released an athleisure line in partnership with Alexo Athletica, an activewear brand that specializes in pants with reinforced pockets for carrying firearms.

Lahren announced her brand collaboration on Instagram Friday morning, adding that she has been told she is “too controversial” for athleisure-wear and should stick to “politics and Trump cheerleading.”

Some have told me I’m too “controversial” to have an athleisure line, that conservatives should just stick to politics and Trump cheerleading. My response? Watch me. Introducing Freedom by Tomi Lahren by @alexoathletica full line available now. #TeamTomi #FreedombyTomiLahren #Alexo #athleisure

“I think there are a lot of young girls out there who don’t feel like they have a brand that represents their freedom,” Lahren said in her clothing line’s promotional video.

Alexo Athletica is most famous for its signature “carrywear” leggings and pants, which can hold multiple small “protection tools” (like Tasers or pepper spray) and a loaded firearm that is smaller than 23 ounces, but Lahren’s line of leggings doesn’t have a built-in holster for guns.

Alexo founder Amy Robbins, who is best known as a former host of NRATV’s Noir, previously told Vox’s Kaitlyn Tiffany that Lahren’s Instagram post in March 2018, which promoted concealed carry pants, convinced her that influencers were vital to a growing business.

Live. Speak. Stand. Run. Carry with Confidence. Ladies, chances are your assailant is gonna be bigger, stronger and faster and that’s why you have @alexoathletica for your gun, your mace, or even your phone. Yeah, you’ve got it covered. #TeamTomi #alexoathletica #NotYourAverageGunGirl

“That was one of the first a-ha moments when we knew how important brand ambassadors were,” Robbins said. She has also made the case that Alexo is not just restricted to selling firearms-related apparel; the company promotes women’s self-defense holistically and has featured models with pepper blasters, Tasers, and stun guns.

According to Lahren, the line is “more than a pair of leggings or a sports bra.” That’s a sentiment also echoed by other activewear brands, like Outdoor Voices (#DoingThings) and Nike (#JustDoIt). Whether her particular brand is “too controversial” for athleisure, however, remains to be seen.

The Nobel Prize in economics goes to 3 groundbreaking anti-poverty researchers
Trump and Barr have been urging foreign governments to help them investigate the Mueller probe’s ori...
Vox Sentences: Schultz stirs up a Venti-size debate
A doctor on 9 things that could go wrong with the new vaccines
The world’s problems overwhelmed me. This book empowered me.
Wisconsin has an election next week in the middle of a pandemic. It’s shaping up to be a debacle.