Top Democrat says the House will impeach Trump, just not yet 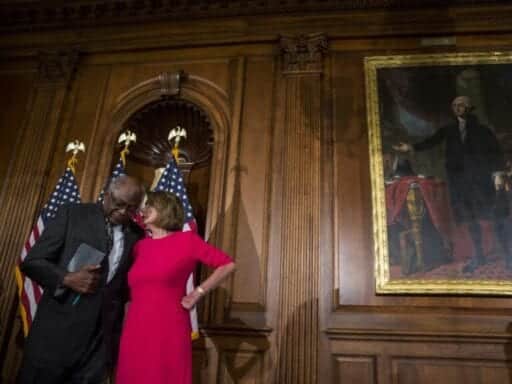 House Majority Whip Rep. James Clyburn said he believes the president will face impeachment in the days to come.

In an interview with CNN’s Jake Tapper, Clyburn said House Democrats are moving methodically to build the type of impeachment case against the president that Speaker Nancy Pelosi has called “ironclad.”

“We’re trying to take our time and do this right,” Clyburn said. “I don’t see this as being out of whack with what people’s aspirations are.”

.@JakeTapper: “It sounds like you think that the President will be impeached, or at least proceedings will begin in the House at some point, but just not right now?”@WhipClyburn: “Yes, that’s exactly what I feel.” https://t.co/Y0gTFkzqeM #CNNSOTU pic.twitter.com/LPvGXjuzc0

When asked by Tapper if he felt that Trump will eventually face impeachment, Clyburn did not mince words.

Although a number of Clyburn’s colleagues in the House have long advocated for impeachment, those calling for impeachment gained new energy last week after special counsel Robert Mueller said in a press conference that his investigation had not cleared Trump of obstruction of justice. His report, in fact, details several instances in which the Trump administration may have obstructed his federal investigation.

While Mueller did not clear Trump of obstruction, his report also did not recommend the Department of Justice pursue a case against the president, which, in essence, punted the question of Trump’s criminality to Congress.

Events proceeding Mueller’s press conference also led to increased fervor for impeachment. Recently, the White House instructed Don McGahn, former White House counsel, to ignore a Congressional subpoena. Early in May, a House committee voted to hold Attorney General William Barr in contempt of Congress after he refused to release an unredacted Mueller report; the vote has yet to go to the full House.

Now Democrats outside of Washington are putting pressure on their representatives to begin formal impeachment proceedings. California Democrats met Speaker Nancy Pelosi with chants of “Impeach!” at the party’s convention in her hometown of San Francisco Saturday. Pelosi acknowledged the growing frustration from the public on the House’s seeming inaction.

“We will go where the facts lead us,” Pelosi said. “President Trump will be held accountable for his actions — in the Congress, in the courts and in the court of public opinion.”

Across the country, Democrats are facing increasing pressure to impeach President Trump at town halls, according to a report from The Hill’s Cristina Marcos.

Rep. Ann Kirkpatrick, who represents a swing district in Arizona, met with frustrated constituents who asked her why the Mueller report wasn’t enough on its own to impeach Trump.

“I think it is,” Kirkpatrick told them. “I know it’s a little frustrating because people want something to happen right away.”

“I understand what you guys are doing with these bills, and that’s great,” one constituent told Shalala. “But you can’t fix the roof if the house is on fire, so it’s not acceptable that we’re ignoring this.”

Democrats maintain that it is important to carefully gather evidence and conduct investigations so the public sees impeachment as due process and not a political witch-hunt.

“If the public ever feels that we are being political with this, we will have done a tremendous harm to the country, to the Constitution, and to the people that we are sworn to serve,” Clyburn said Sunday.

According to a CNN poll, 76 percent of Democrats support impeaching Trump.

As questions about potential obstruction from Trump pile up, Democrats remain fearful of the divisiveness of an impeachment trial. As Vox’s Ella Nilsen reported, Democratic leaders don’t just worry that the Republican-controlled Senate would kill impeachment proceedings, but that voters might punish Democrats in 2020:

As Vox’s Ezra Klein pointed out, “The founders could have made the impeachment process legal or automatic. Instead, they made it political and discretionary.”

Even though Trump’s 42 percent public approval rating is extremely low, Pelosi and the majority of her caucus only want to move toward impeachment if there’s something so bad that Republicans can also get on board. They remember when Republicans who impeached President Bill Clinton in the 1990s reaped the political consequences in the 1998 midterms, when they lost seats in the House and made few gains in the Senate. Historians later concluded that backlash against Republicans for Clinton’s impeachment resulted in the GOP’s weak showing in the midterms.

That history isn’t lost on Democrats, especially as they stare down a pivotal presidential election in 2020.

“We also have lessons from the Clinton impeachment that when you do impeachment for primarily political reasons, that also causes problems for the country,” Rep. Mary Gay Scanlon (D-PA), the vice chair of the House Judiciary Committee, told Vox. “This is not something the country can enter lightly, but by the same token, the country cannot have a president that undermines the rule of law.”

A possible alternative to impeachment is formally censuring the president, which would require a simple majority in the House, but would not remove Trump from office. A censure resolution would likely face difficulties passing the Republican controlled Senate, however. Should Congress decide not to act, legal proceedings against Trump could also be pursued once he leaves office.

“You little pencil neck”: Trump’s taunts of Schiff in Toledo were like a parody of a playground bull...
Female scientists are up against a lot of unconscious bias. Here’s how to fight it.
This autism dad has a warning for anti-vaxxers
Democratic women swept key House primary runoffs in Georgia
Why are liberals more afraid of the coronavirus than conservatives?
The Bernie-Biden clash over Social Security, explained