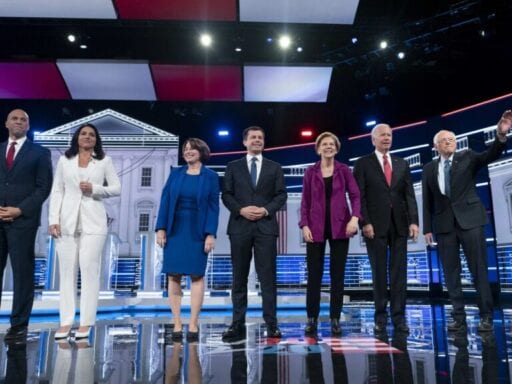 Sen. Cory Booker and other 2020 candidates have asked that the rules be relaxed to foster greater diversity on the party’s final primary debate stages.

Nine Democratic presidential candidates sent a letter to the Democratic National Committee Saturday urging the party to ease the qualification requirements for upcoming debates, highlighting tensions within the party over the decline of candidates of color in a primary field once heralded for being the most diverse in US history.

To make the stage for the December debate — which most candidates have pledged to boycott over a labor dispute at the venue — the DNC required candidates to receive at least 4 percent in four DNC-approved polls, and have at least 200,000 individual campaign donors.

The requirements for a debate invitation have grown more stringent as the primary has progressed; it is not yet clear whether the next year’s debates will have tougher requirements for participation. Despite this uncertainty, the letter, spearheaded by Sen. Cory Booker and signed by all seven candidates who have qualified for next week’s debate, asks the DNC to hold candidates to one requirement — either polling or donor numbers — instead of both.

The criteria have “unnecessarily and artificially narrowed” the diverse pool of presidential candidates “before voters have had a chance to be heard,” the letter reads. “As a result, candidates who have proven both their viability and their commitment to the Democratic Party are being prematurely cut out of the nominating contest before many voters have even tuned in — much less made their decision about whom to support.”

Should the Democratic debate scheduled for next Thursday proceed, it will feature seven of the 15 candidates left in the race. Six of these candidates are white — former Vice President Joe Biden; Sens. Elizabeth Warren, Bernie Sanders, and Amy Klobuchar; Mayor Pete Buttigieg; and businessman Tom Steyer — and just one is a candidate of color, businessman Andrew Yang. California Sen. Kamala Harris, the only other person of color to qualify, dropped out of the race earlier this month.

Despite the top candidates signaling support for the rules change, the DNC won’t budge.

In a statement to Politico, the party argued candidates had a chance to give their feedback on the process before it was adopted and “not one campaign objected” to it.

The statement continued, “The DNC will not change the threshold for any one candidate and will not revert back to two consecutive nights with more than a dozen candidates. Our qualification criteria is extremely low and reflects where we are in the race.”

DNC chairman Tom Perez reiterated this position in an interview with the New York Times Sunday, and said the lineup for January’s debate will definitely depend on both polling and donor rolls. However, Perez said he may consider tweaking the qualifying requirements for debates in February, March, and April.

If the party were to acquiesce to the letter’s request, Booker and former Housing and Urban Development Secretary Julián Castro would be allowed to participate in 2020’s debates despite failing to meet the existing criteria. Rep. Tulsi Gabbard of Hawaii has said she would also qualify, though she might elect not to participate — she announced she would have skipped December’s debate even if she made the cutoff to protest the DNC’s rules.

And although the letter focuses on the increase in diversity a rule change would bring about, such a change would also have the effect of opening the path to the debate stage to even more white candidates: former New York City Mayor Mike Bloomberg is polling high enough, while self-help guru Marianne Williamson may have enough donors to return to the stage.

Early in the Democratic presidential primary, left-leaning voters could choose from a diverse group of viable candidates, including Harris as one of the early frontrunners.

But as the year comes to a close, the highest-polling choices are four white people, two of whom are straight white men. It’s sparked some self-reflection within a party that boasts a significantly more racially diverse electorate than its opponents.

Political observers have said the struggles of candidates of color are the result of a number of factors: For one, candidates of color have raised significantly less money than white candidates. Harris, as the Associated Press notes, is the highest-ranking black women in US government, but she still raised $16 million less than Buttigieg, the mayor of South Bend, Indiana.

Observers have argued candidates of color are also hurt by questions of electability. Some Democrats worry that the white working class people who voted for Trump in 2016 won’t come back to the party if the nominee isn’t white, the New York Times reported.

In the case of Harris, Howard University political science professor Niambi Carter told Vox’s Li Zhou, “For many folks in the media and the public, Harris is not the prototypical candidate. She is not white; she is not old; and she is not male. … This belief cannot help but to penetrate the general public’s perceptions of Harris, and for those still reeling from the 2016 election, they don’t want to risk it all again on a person like Kamala Harris.”

Meanwhile, Biden — a white, male senior citizen — is routinely ranked the most electable candidate in polls, and retains the strongest support among African American voters of any of the candidates.

Of course, many argue the lower-ranking candidates are faltering because they’ve failed to resonate with voters. Perez himself made this point in speaking with the Times, saying, “I’m not doing the polling … if voters are disappointed that [Booker] hasn’t qualified, then when they answer the phone, they need to express their preference for Cory Booker.”

However, Theodore Johnson, who studies African American politics at the Brennan Center for Justice, told the New York Times that there is another factor affecting candidates of color, namely that first black president casts a shadow over how they’re evaluated: “Their road is easier because of Obama, but their ability to secure the nomination is harder because they’re not Obama.”

Despite these difficulties, as Vox’s Matthew Yglesias wrote, Democratic voters are increasingly making racial equity a foundational part of their political demands — an effect he’s calling “the Great Awokening.” And those demands are likely to affect how race plays into contests beyond the 2020 presidential election:

To the extent that one believes — as, in fact, the evidence seems to say — that racial polarization of the electorate was a boon to Trump’s fortunes, it seems plausible that Democrats’ new post-Awokening political style will only help him win. But since anti-racism really is a central motivating force for the anti-Trump coalition, it hardly seems realistic or reasonable to expect it to hide that fact … While the Great Awokening might drive some Democrats into Trump’s arms now, the sustained phenomenon is forcing the Democratic Party to confront the legacy of America’s racial caste system squarely. The next Democratic president will have to do the same.

Bill Barr and Elizabeth Warren find a common enemy: Google
The Hillary Clinton-Tulsi Gabbard feud, explained
No one expected The Athletic could get people to pay for sports news. Now it has 600,000 subscribers...
Kamala Harris is making history. Don’t let hatred and fear take that away.
Netflix’s The Laundromat is certainly the most entertaining way to learn about the Panama Papers
The Minnesota primary elections, one of 2018’s fiercest battlegrounds, explained