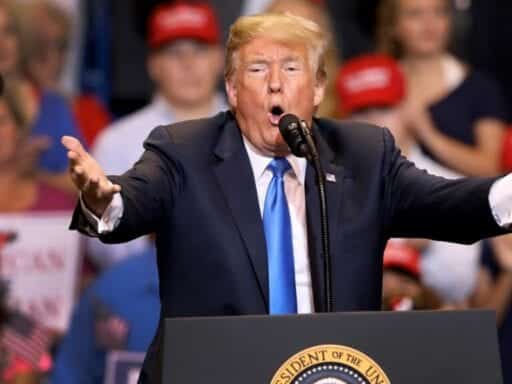 Trump mentioned his “great” meeting with Putin at a rally in Pennsylvania — but skipped over Russian interference in the 2018 midterms.

Trump’s top intelligence and law enforcement officials warned Thursday that the threat of Russian interference in US elections is real, and ongoing. They also assured reporters that President Donald Trump was taking the issue seriously.

“President Trump has not and will not tolerate interference in America’s system of representative government,” National Security Adviser John Bolton said Thursday. Bolton also told reporters that Trump raised the issue of “Russian meddling” in his Helsinki summit with Russian President Vladimir Putin — and that Putin said it was the very first issue Trump raised in their meeting.

“The issue was discussed and in fact President Putin said … the first issue President Trump raised was election meddling,” Bolton says about the Helsinki summit between Trump and Putin pic.twitter.com/YgnCOPzOg8

But Trump didn’t express his concerns about continuing Russian cyber attacks at a rally on Thursday in Wilkes-Barre, Pennsylvania. Instead, Trump bashed the “Russia hoax” and blamed the press for putting a negative spin on his “great meeting” with Putin.

“In Helsinki, I had a great meeting with Putin. We discussed everything,” Trump said to cheers from the crowd. “We got along really well. By the way, that’s a good thing, not a bad thing. That’s a really good thing. Now, we are being hindered by the Russian hoax. It’s a hoax, okay?”

Trump has intensified his attacks on special counsel Robert Mueller’s investigation in recent days. His comments are particularly stark considering the country’s top intelligence chief, the FBI director, and other officials told reporters Thursday that Russia has launched hacking attempts against political candidates and government officials. The officials said Russia continues to wage a campaign to disrupt American democracy ahead of the 2018 midterms, though those operations are not yet on the scale seen in the 2016 election.

“I said, ‘whatever happened to diplomacy?’” Trump said at the rally, adding that if he had yelled at Putin, the media would have called him “rude” and “terrible.”

Trump did expel 60 diplomats in March after the Russian government was accused of poisoning a former spy on British soil, though the Washington Post reported at the time that Trump was angry that the number was so high.

And Trump also complained about Germany’s pipeline, though his tough talk was directed at Germany during a tense NATO summit. Putin dreams of breaking up the NATO alliance, and Trump’s frequent criticism of America’s allies just furthers Putin’s goals. That’s also true of Trump’s reluctance to state unequivocally that the Russian cyber threat is real, and a threat to American democracy.