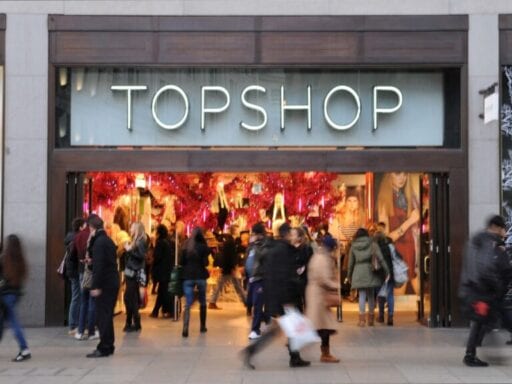 Green tried to stop the press from publishing reports of harassment claims against him. Now some shoppers are calling for a boycott.

Philip Green, the English billionaire behind British fast fashion chain Topshop, has been named as the subject of sexual harassment accusations that were brought to light earlier this week.

On Tuesday, British newspaper the Telegraph published a report about how it had spent eight months investigating a “leading businessman” for “sexual harassment and racial abuse of staff,” but was forced to keep silent about his identity because of a court order. On Thursday, member of Parliament Peter Hain openly named Green as the subject of the Telegraph article, saying it was his “duty” to do so.

The Telegraph reported that, similar to the case of Harvey Weinstein and other stories from the #MeToo movement, Green used non-disclosure agreements to buy the silence of his alleged victims. Similarly, he obtained a gag order from Terence Etherton, one of the most senior judges in the UK, against the Telegraph. MP Hain, in his remarks, said that Green is a “powerful businessman using non-disclosure agreements and substantial payments to conceal the truth about serious and repeated sexual harassment, racist abuse and bullying.”

In a statement to the Telegraph, Green, who presides over a retail empire called the Arcadia Group, said:

I am not commenting on anything that has happened in court or was said in Parliament today. To the extent that it is suggested that I have been guilty of unlawful sexual or racist behaviour, I categorically and wholly deny these allegations. Arcadia and I take accusations and grievances from employees very seriously and in the event that one is raised, it is thoroughly investigated. Arcadia employs more than 20,000 people and in common with many large businesses sometimes receives formal complaints from employees. In some cases these are settled with the agreement of all parties and their legal advisers. These settlements are confidential so I cannot comment further on them.

According to the Sun, Arcadia Group held an emergency meeting Thursday evening, as store associates from companies like Topshop and Miss Selfridge are threatening to quit over the news about Green.

Who is Philip Green and what are the allegations against him?

Green is one of England’s wealthiest businessmen. He has an estimated net worth of about $4.5 billion, according to Forbes, and Arcadia Group earns about $2.4 billion annually. He’s notorious in the British press for throwing lavish parties, and has befriended powerful figures including Elton John, the Clintons, and Anna Wintour.

While Arcadia Group includes high street brands like Burton and Miss Selfridge, its most visible labels abroad are Topshop and the accompanying menswear line, Topman. Even though it’s technically in the fast fashion category, debuting new collections every few weeks, Topshop is pricier and more stylish than, say, H&M.

The Telegraph reported that it has been looking into “allegations of bullying, intimidation and sexual harassment made against” Green, although it has not as of now published specific accusations. In retaliation, Green, according to the paper, has “hired a team of at least seven lawyers and spent close to £500,000 in legal fees to persuade the Court of Appeal to injunct The Telegraph.”

In its initial story, the Telegraph wrote that there is “a clear public interest in publishing the claims” — both because Green holds serious power and capital in the British economy, and also because silencing troubling reports via NDAs is shockingly common.

The day the report was published, a member of Parliament brought up the use of NDAs to British Prime Minister Theresa May, without mentioning Green. May replied that “non-disclosure agreements cannot stop people from whistleblowing, but it is clear that some employers are using them unethically.”

Sales at Arcadia-owned brands like Topshop have been slipping over the past few years, as companies with fleets of stores struggle to compete against digital brands like Boohoo and Asos. This most recent scandal, which evokes both the #MeToo movement and the press’s fight for freedom, could hurt Green’s business even more.

“While many of the allegations are only claims and have not yet been legally proven, Philip Green’s association with them is highly damaging for both him and the various retail businesses he owns,” Neil Saunders, managing director of GlobalData Retail, said to Vox in an email.

He continued: “Unless the claims are proven, beyond all doubt, to be false, then there is no coming back. Quite rightly, the stench of sexual misconduct lingers for life. The sexual abuse of women is not something people forgive or forget, and it will weigh on people’s minds when they decide where to shop.”

On social media, shoppers are already calling for boycotts against brands within the Arcadia Group, and against Topshop specifically. Some are using the hashtag #PinkNotGreen, which was already circulating last week after a different incident with Topshop in which the retailer chose not to promote a book about feminism by author Scarlet Curtis in stores.

Dear ‘SIR’ Philip Green.
You are a misogynist.
You use feminism for your commercial gain.
You are revolting.
You deserve to be stripped of your knighthood.
You WILL pay the consequences.
BRAVO @Telegraph & Lord Hain. You are the good guys. #pinknotgreen #TimesUp #MeToo

Don’t just call out Philip Green with words, call him out with your wallets, boycott Topshop #PinkNotGreen

Vox has reached out to Topshop for comment, and will update this story as it develops.

The future of the economy hinges on child care
Amazon’s surveillance cameras fly now — which is terrifying
Even worse than Jeffrey Goldberg’s sexist quote was his gaslighting of a journalist
Nevada caucuses 2020
Jeff Sessions announces a religious liberty task force to combat “dangerous” secularism
NCAA athletes could now receive more compensation, but with limits