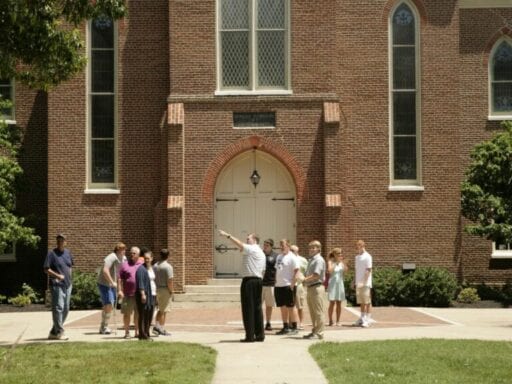 Now, 16-year-olds can jet set from campus to campus to tour universities.

The ability to go on lengthy road trips and tour a slew of colleges has been made to seem like a normal part of the college application process. Really, though, it’s a privilege: In many cases, families must be able to take multiple days off from work, and also pay for transportation, lodging, and food in every single college town they visit.

Applying to college is expensive in itself, with the average application costing $43 and the average student applying to 3.16 colleges. While some are working to make college more accessible for all, others are focused on making the process that much smoother for those in the top income brackets — you know, the ones who really need it.

This fall, Mandarin Oriental Hotels announced it will offer a College Tour Package, which includes a luxury suite that can fit a whole family, private jet flight to and from “multiple university destinations” by XOJET, and admissions coaching with college entrance consultant Abby Siegel. At each hotel check-in, buyers will receive college gear and something called “luxury” dorm-room amenities. As of now, the College Tour Package is available in Atlanta, Boston, Miami, New York, and Washington, DC, running through November 15.

The hotel is selling it as a “time-saving dream,” as you can avoid long airport waits. They also claim it could be cost-effective: A New York City to Boston package costs $25,000, but according to the New York Times, XOJet says this bundled fare is cheaper than booking your own flight, hotel, and counseling. (It seems safe to assume they mean a private flight — according to one charter flight service, chartering a private jet from New York City to Boston could range from $5,800 to $16,000.)

This package, amazingly, isn’t the only one of its kind. Magellan Jets offers a 10-hour jet card for $57,000 meant to be used for college tours. A jet card holder can access aircrafts for a fixed hourly rate. Usually, hours are sold in increments of 25, 50, or 100, but this lower time and cost commitment is meant to appeal to those on college tours — in 10 hours, the thinking goes, you can fly to three to four colleges. For an additional fee, the service will provide an onboard admission counselor.

But of course, it’s not only about convenience — it’s about connections. The Magellan team says that if a tour-goer is especially excited about a school, they’ll offer to set the student up with any graduate who is a Magellan member. And, with the knowledge that 25 percent of admission officers said that they felt pressure to admit students because of their connections, this service might be incredibly helpful.

In 2014, 77 percent of 24-year-olds who held undergraduate degrees were from families with an income of more than $65,000, and more than 50 percent of degrees came from those whose family earned more than $116,000, the top income bracket. Only 10 percent of 24-year-olds with degrees came from households earning less than $35,000. There are a number of reasons why the graduation rate gap between the poor and wealthy continues to widen; private jet access probably isn’t helping.

Brian Taylor, the managing director of college consultant firm Ivy Coach, has a different view on the package. He told the New York Times that the tours may actually be a bad idea, as a student jetting from school to school may not seem “likeable.” Sounds about right.

Facebook still won’t take down politicians’ misleading posts, but it’s trying to register 4 million ...
One Good Thing: The trick uniting the internet’s funniest videos
Daredevil season 3 is a return to what made the show so good in season 1
How ballots are actually counted, explained by 3 election officials
Lindsey Graham proposes invading Venezuela to oust Maduro
Democrats’ opening arguments demonstrate how overwhelming the case for impeachment really is