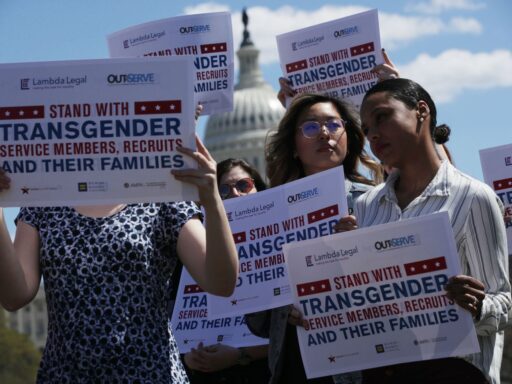 Three years after then-President Donald Trump tweeted that he would order a ban on transgender service members, current President Joe Biden has ordered the Pentagon to rescind the policy during a meeting with his new secretary of defense and the joint chiefs.

On Monday, Biden signed an executive order to return to a policy of trans inclusion in the armed forces — it’s similar, with some noted exceptions, to one first put in place by the Obama administration in 2016.

“President Biden believes that gender identity should not be a bar to military service, and that America’s strength is found in its diversity,” reads a White House statement sent to reporters Monday, according to a HuffPost report. “This question of how to enable all qualified Americans to serve in the military is easily answered by recognizing our core values. America is stronger, at home and around the world, when it is inclusive. The military is no exception.”

LGBTQ advocates were encouraged by the news of Biden’s swift action. “This reversal demonstrates that for the world’s largest employer, the US Defense Department, qualifications for a job should always supersede prejudice,” said Erin Uritus, CEO of Out & Equal Workplace Advocates, an LGBTQ employment advocacy group, in a statement. “This move will no doubt have reverberations across employers, many of which have invested in programs to support transgender and broader LGBTQ inclusion.”

It’s difficult to count how many transgender troops are currently serving, but a 2014 study by the Williams Institute at UCLA estimated that there were about 15,500 trans individuals serving in the US military. It’s generally accepted that the US military is the largest US employer of trans people.

Revoking the ban has been a core Democratic tenet since Trump first instituted the ban in 2017, and Biden had promised to do so on his first day in office. Though Biden didn’t reverse the policy on day one, instead choosing to wait until Lloyd Austin was confirmed to his new position as secretary of defense by the Senate (which happened Friday), his administration has already shown its commitment to reversing Trump’s anti-LGBTQ policies.

Among the 14 executive actions he signed on Inauguration Day was an order to apply and expand LGBTQ nondiscrimination protections throughout the federal government, which drew a small but loud rebuke from conservatives and anti-trans activists. The military ban reversal was the logical next step in rolling back Trump’s anti-trans policies.

In June 2016, President Barack Obama’s Defense Secretary Ash Carter announced the DOD would lift its long-running ban on transgender service members, a remnant of the days before even the “don’t ask, don’t tell” era of queer enlistment. The policy allowed for trans people to both enlist and serve just as cisgender people do, removing decades of prejudicial barriers to service.

That policy was reversed fairly quickly under Trump, whose evangelical advisers sought a broad range of government restrictions on the lives of trans people, including those in the military.

Despite his administration’s record on the issue, Trump rarely mentioned trans people himself. His tweets on July 26, 2017, banning trans people from the military were an exception.

“After consultation with my Generals and military experts, please be advised that the United States Government will not accept or allow … Transgender individuals to serve in any capacity in the U.S. Military,” he said in a series of tweets, citing that the military “cannot be burdened with the tremendous medical costs and disruption that transgender in the military would entail.”

Though Trump noted the alleged cost of transition-related medical care in justifying his ban on trans troops, according to a 2016 RAND Corporation report, the military would need just $2.4 million to $8.4 million per year to pay for transition-related care, an increase of 0.4 to 0.13 percent in health care spending. The military spends five times that amount on Viagra alone.

Ultimately, Trump’s policy of exclusion took time to develop and be implemented, in part due to several federal lawsuits against the ban — not seeing completion until January 2019. The policy Trump’s military brass came up with forced all troops to serve and present themselves according to the sex stereotypes and gender roles of their assigned sex at birth. In other words, trans women with gender dysphoria would still be allowed to serve as long as they forwent hormone replacement therapy, continued to be referred to by a male name and male pronouns, and met the applicable male grooming and physical standards. Trans advocates compared it to forcible conversion therapy.

Though the policy grandfathered in troops who had already begun transitioning when the policy went into place, critics of the ban pointed out how blatantly transphobic such a policy was.

The administration, in turn, tried to argue in court that the policy was not a “ban,” per se, since it allowed trans troops to serve — but only if they publicly committed to not transitioning. But a ban on transitioning is effectively a ban on trans people themselves.

What Biden’s order actually says and does

According to the executive order’s text, “involuntary separations, discharges, and denials of reenlistment or continuation of service on the basis of gender identity or under circumstances relating to gender identity” are now prohibited.

Notably absent from that list of prohibited practices is the bar on new enlistments by trans people, making it unclear if new enlistees can be subject to discrimination. The White House did not respond to a request for clarification from Vox.

As I previously reported, the EO doesn’t at once undo all restrictions on trans service.

For now, gender dysphoria aren’t cause for discharge, but trans enlistments are still on hold.

DOD and DHS, after consultation with Joint Chiefs, must produce a report within 60 days. pic.twitter.com/imsxIU6ntv

But LGBTQ legal experts cautioned against rushing to judgment about whether new enlistments remain banned. “I understand people are anxious to see the full order and to confirm its scope, but I’m confident that the intent is to encompass both enlistments and continued service,” Shannon Minter, legal director at the National Center of Lesbian Rights, told Vox before the text of the executive order was released. NCLR had previously sued the Trump administration over the ban.

According to the Washington Blade’s Chris Johnson, Biden’s order gives the departments of Defense and Homeland Security 60 days to make progress on lifting the ban. The 60-day window is notably longer than the 30 days that the Palm Center, an independent, nonpartisan think tank for public policy, estimated it would take to fully reverse the ban.

Alt-right protester interrupts Dorsey hearing. Auctioneer-turned-congressman drones her out.
Elizabeth Warren marches with striking Chicago teachers, a day after releasing new K-12 education pl...
Jojo Rabbit, a coming-of-age story about a boy and his best friend Hitler, is both hilarious and gri...
Elon Musk reportedly almost avoided a federal lawsuit — but then backed out
The US House’s Supreme Court defense of its Trump investigation was a disaster
The Supreme Court decision gutting public sector unions, explained