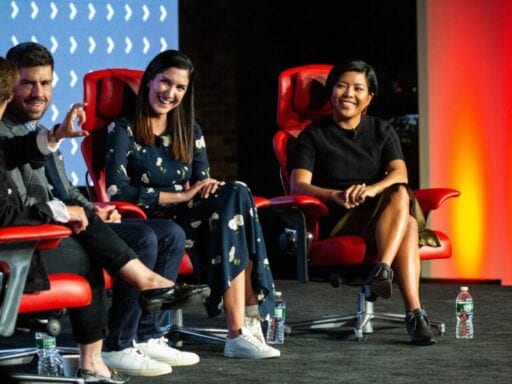 Share
Loading...
Away cofounders Jen Rubio and Steph Korey talk what’s next for the travel company — and what’s not. | Keith MacDonald for Vox Media

You will be seeing more apparel, celebrity collaborations, and consumer and wellness products coming from travel company Away in the coming months. You will not be seeing its luggage in retail stores — and absolutely not on Amazon.

Away co-founders Jen Rubio (now its chief brand officer) and Steph Korey (now its CEO) sat down with Recode’s Jason Del Rey and Kara Swisher at the 2019 Code Commerce Conference in New York City on Monday to discuss where the startup is headed. Founded in 2015, Away originated as a luggage company that mainly offered a single $225 hard-shell carry-on suitcase with an ejectable battery for phone charging.

Away has since expanded to sell a wide variety of luggage, bags, and other travel accessories. It boasts seven brick-and-mortar stores, with more on the horizon, and has its own media publication, Here Magazine. It has a $1.4 billion valuation. But the company has bigger ambitions.

“I think, really, what we’re trying to build is a long-lasting, beloved consumer brand,” Rubio said.

On the product front, that means, in part, apparel, which the New York-based company said it would be expanding to earlier this year. It’s not entirely clear what that will look like, but the co-founders say the plan isn’t your typical airport athleisure (so probably no sweatpants) but instead clothing that’s wrinkle-free and antibacterial, something you can wear to a meeting. It also means consumer and wellness products, such as skin care and personal care products. The company appears to be currently looking for someone to head up those efforts.

Away says it’s hyper focused on feedback from its customers — which is a line you often hear from direct-to-consumer companies, including Warby Parker and Everlane. And it sees that relationship with consumers as its biggest advantage. “On the spectrum of companies, we’re one of the most vigilant about soliciting consumer feedback,” Korey said.

That means, among other things, you won’t be seeing Away suitcases in your local department store anytime soon, let alone on Amazon. Korey said Away has no plans to sell its products to businesses at this time and that it has not “found any relationship” with an outside seller it believes would be adequate.

She acknowledged that e-commerce giant Amazon has contacted Away multiple times, asking if they want to put their products on its marketplace, noting how many people search for Away on Amazon’s platform. “Our response is always, ‘Do you know what they do when it’s not there? They go to our site,’” Rubio said.

Del Rey pointed out that right now when you search for Away’s suitcases on Amazon, it points you to an Amazon-branded product. “Some people will buy that, and they’re not the Away target customer,” Rubio said.

With Eighth Grade, Bo Burnham gives the selfie generation the portrait it deserves
Netflix’s The Laundromat is certainly the most entertaining way to learn about the Panama Papers
A gruesome murder in France rekindles the country’s debate on free speech and Islam
The best way to improve schools? Invest in teachers.
SNL’s Pete Davidson responds to Kanye West’s pro-Trump rant: “make Kanye 2006 again”
9 experts reflect on the US reaching 200,000 Covid-19 deaths