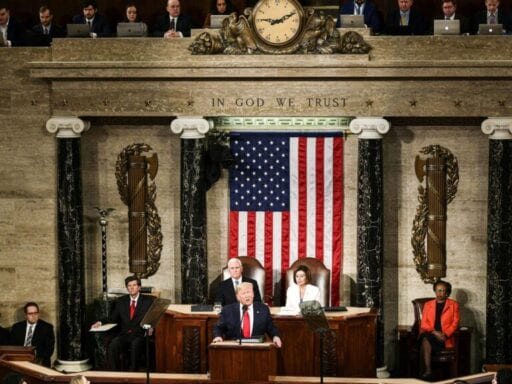 His State of the Union speech didn’t mention climate change. Instead, he bragged about planting trees.

During his State of the Union address on Tuesday, President Trump didn’t breathe a word about climate change, the most serious long-term threat to our security, health, economy, and natural world.

He did, however, mention his surprising new support for trees.

“To protect the environment, days ago, I announced that the United States will join the One Trillion Trees Initiative, an ambitious effort to bring together government and the private sector to plant new trees in America and all around the world,” Trump said.

Last month, Trump announced that the US would join the program at the World Economic Forum meeting in Davos, Switzerland. “We will continue to show strong leadership in restoring, growing and better managing our trees and our forests,” Trump said at the event, but didn’t add any details about what the US would do to participate.

The trillion tree program is also the newfound passion of Marc Benioff, the founder of Salesforce; at Davos, he launched a platform to manage it, called 1T.org. The company has also pledged to “support and mobilize the conservation and restoration of 100 million trees over the next decade.”

The idea here is that tree planting is nature-based solution to climate change, since trees and soil can take in and stor heat-trapping carbon from the atmosphere that are warming the planet. Recently, there’s been a massive surge in interest in this approach, especially since a controversial study in 2019 found that fully restoring degraded forests around the world would undo a large share of human-caused greenhouse gas emissions.

This idea seems to have struck a chord with some Republicans lately. Last year, Rep. Bruce Westerman (R-Ark.), wrote an editorial calling for preserving forests by creating markets for sustainable forest products like wood pellet biofuels and timber construction materials. This week, Westerman is expected to unveil a bill that would commit the US to planting 3.3 billion trees a year for the next 30 years.

“The pragmatic, proactive thing to do is to plant forests and manage them so that you’re actually pulling carbon out of the atmosphere,” Westerman told The Hill.

“The United States will join the One Trillion Trees Initiative, an ambitious effort to bring together government and the private sector to plant new trees in America and around the world.” – @realDonaldTrump

POTUS has the goal. I have the plan. #SOTU

Westerman has a degree in forestry, so his interest in reforestation makes sense. Trump, however, has flaunted his disdain for all things pertaining to climate change, and has rolled back regulations to reduce greenhouse gas emissions to attacked climate activists. He has also proposed opening up the Tongass National Forest in Alaska, North America’s largest intact temperate rainforest, to logging. The Center for American Progress called it America’s largest natural carbon sink.

“The same man who is proposing to cut down the Tongass National Forest wants to plant a trillion trees,” said Ryan Richards, a senior policy analyst at the Center for American Progress, in a statement. “He can’t have it both ways. We need a comprehensive climate plan that gets us to 100 percent clean future.”

Greenpeace was similarly skeptical about Trump’s commitment. “In the face of a climate emergency, Trump’s ‘trillion trees’ initiative is like trying to put out a raging dumpster fire with a squirt gun,” said Janet Redman, climate campaign director for Greenpeace USA. “Planting trees is not a substitute for cutting carbon emissions or addressing the unjust impacts of extractive industries on marginalized communities.”

Tree planting, like Republicans’ push for innovation as a solution to climate change, is an approach that doesn’t challenge pro fossil-fuel orthodoxies. It elides the need to reduce greenhouse gas emissions, curb fossil fuel consumption, work with other countries, or to increase energy efficiency. Instead, it distills the solution to climate change into a seemingly simple move. So for Trump, committing to planting trees is an easy route to claiming he’s doing something for the environment with little political risk.

In the year 2020, how can a president of the United States give a State of the Union speech and not mention climate change?

However, reforestation is not exactly a simple fix for climate change, or any other environmental issue. Forests are diverse ecosystems and their ability to store carbon depends not just on trees, but a delicate balance of rainfall, soil nutrients, fungi, animals, and plants working together. A successful tree-planting program has to include all of these elements, adding cost and complexity, and it’s not clear how 1t.org will address this.

And forest restorations requires ongoing active management, support, and buy-in on the ground from communities that live in and around forests, particularly indigenous groups that count on healthy forests for their survival. Simply planting scores of oaks, maples, kapoks, and cedars will not solve climate change and won’t guarantee that a forest will survive and help the climate.

Planting trees also in no way reduces the need to curb greenhouse gases to emissions is the goal is to limit climate change this century to less than 2 degrees Celsius, the target set out under the Paris climate agreement, an agreement that Trump is also backing out of later this year. But with all of Trump’s rollbacks of environmental protections, joining the drive to plant a trillion trees stands to be one of his most significant actions to help the planet.

This is an emergency, damn it
The US was offered millions of masks in January. The Trump administration turned the offer down.
ThirdLove says it’s by women, for women. But women who’ve worked there disagree.
The 5 most important questions about carbon taxes, answered
How a Black bioethicist makes the case for vaccination to people of color
9 questions about the coronavirus outbreak, answered