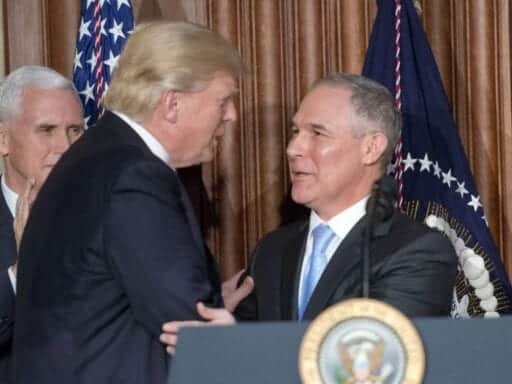 As EPA chief, Pruitt was pure Trumpism. But Trumpism couldn’t save him.

Scott Pruitt, who resigned Thursday, was not like past administrators of the Environmental Protection Agency, just as Donald Trump is not like past presidents.

In both cases, it’s not that they’re conservatives. Conservatives have held those positions before. It’s that they seem to be engaged in something different than their predecessors — different not just in degree, but in kind.

They have governed on behalf of their allies and supporters, against their perceived enemies, with virtually no claims to anything more universal. That kind of tribalism in politics is not new, of course, but with the Trump administration, the US conservative movement has more or less abandoned any pretense of anything loftier. Respect for mutual norms and procedural neutrality have gone well out the window.

The GOP has become, in the immortal words of Thomas Mann and Norman Ornstein, “an insurgent outlier — ideologically extreme; contemptuous of the inherited social and economic regime; scornful of compromise; unpersuaded by conventional understanding of facts, evidence and science; and dismissive of the legitimacy of its political opposition.”

As I first wrote in April, tribalism explains Pruitt: his policies, his paranoia, and his ethical and political missteps. Today it also helps explain his legal missteps, which seem to have clinched his resignation.

How the GOP surrendered to tribalism

The story of how the US right radicalized, becoming more and more ideologically homogeneous and extreme, has been told many times (here’s my attempt), so I won’t tell it again here. Suffice it to say, that radicalism has now fully arrived at the EPA.

Past Republican administrations were run by the GOP establishment, which felt obliged to pay homage to shared norms, even when appointing administrators devoted to deregulation. That meant respecting the rule-making progress, staffing the agency with credentialed professionals, deferring to the Senate on appointments, and other matters of professionalism. Among other things, they felt the need to justify their policies, to maintain the pretense that different conceptions of the public good were at issue.

On the surface, at the level of federal politics, the symbolism and formalities of governance still exerted some power over the GOP well into the 2000s (though the theft of the 2000 election was a notable signpost on the path to lawlessness).

But any notion of norms, standards, or restraints that transcend partisanship, that apply equally to all tribes, has all but vanished from consideration. That which is not explicitly forbidden by law is allowed. Mitch McConnell recently bragged that denying Obama Supreme Court nominee Merrick Garland a confirmation vote — a grotesque violation of Senate norms and procedure, the latest in a string orchestrated by McConnell — is the“the most consequential decision I’ve ever made in my entire public career.”

It turns out, by the time Trump took power, what was left of the conservative establishment was ready, nay, eager to be freed from remaining norms. The GOP has rolled over for Trump like a puppy. His naked corruption and overt authoritarian tendencies do not occasion any oversight or even objection, because they are deployed on behalf of the tribe. When you are involved in zero-sum warfare, the ends justify any means.

And so it has been at EPA.

Pruitt is a creature of his tribe

Pruitt is a pure creature of this new hyper-conservative GOP. He came up in Oklahoma conservative politics, where alliance with fossil fuel industries and hostility toward federal regulators are taken for granted and the only serious political threat is from the right. Liberals and environmentalists mostly exist as grotesque caricatures on the conservative media that dominate the airwaves.

Pruitt has lived his life in a conservative bubble, and much like Vice President Mike Pence, his intense religious convictions, his naked political ambition, and his industry-friendly policy agenda are in perfect alignment, with nary a hint of cognitive dissonance. God called on him to deregulate the fossil fuel industry. The more power he gains, the higher he rises in politics, the more he can carry out God’s will.

To understand the Pruitt scandal it helps to know that he believes he was chosen by God to destroy the environment: https://t.co/nvBBsjphIk

Industry people and conservative people (there’s no sign he sees any difference) are simply his people, his tribe. He still echoes some of the old conservative policy talking points that gesture at the public good — job-killing regulations, regulatory certainty, originalism, etc. — but it is desultory at best. There’s no sign he’s trying to persuade anyone. Simulacra of persuasion are just something occasionally required to placate the media.

After all, there’s no one to persuade. His tribe is already convinced and the enemy tribe — a class that in his mind includes the DC political establishment, career agency staff, and the mainstream media — is out to destroy him. It’s a fight, not a salon.

A cosmopolitan-minded person might approach environmental policy and say, “okay, we agree that we should serve the public interest, but our tribes just disagree how best to do it. Let’s come to a compromise.”

For the tribalist, there are only opposing tribes and the battle between them. Pretense to the contrary, appeals to any sort of trans-partisan standards or restraints, are merely a ruse, a gambit in the endless war.

Pruitt was there to serve his tribe, i.e., resource industries.

Tribalism explains why, long before he was EPA administrator, Pruitt was tangled in ethics scandals, as Mother Jones reporter Rebecca Leber recounts in her excellent profile.

Pruitt’s past (and present) ethics scandals do not seem to reflect any particular personal avarice, so much as they reflect someone so accustomed to acting on behalf of industry that it fails to occur to him to try to hide it.

When he was Oklahoma Attorney General he was busted copying industry talking points directly into his communications with the federal government. Emails from that time, which have been dragged out of him by investigations and lawsuits, reveal a long pattern of working in close coordination with industry to attack EPA regulations. They also reveal a striking lack of self-awareness that anyone might object to or even make particular note of such a relationship.

More than anything, Pruitt just doesn’t seem to see anything wrong with it. They worked with their tribe (environmentalists), why shouldn’t he work with his (industry)?

2) The Pruitt Emails: E.P.A. Chief Was Arm in Arm With Industry
https://t.co/MCbBFVbtPP

It explains his paranoia and current scandals

Tribalism explains why Pruitt hired an enormous security team, built a $43,000 security phone booth, avoids flying coach, hires political cronies without Senate confirmation, exiles anyone who questions him, boxes out career staff, works to diminish the influence of scientists, meets almost exclusively with industry groups, has issued agency talking points playing down the threat of climate change, and told his aides to change his official calendar numerous times to hide meetings from the public.

It’s all for the same reason, captured in what he said to a Washington Times podcast in April about the scandals at the time:

I think it’s noise. It’s been noisy and competitive since Day One, because this agency has been a bastion of liberalism since Day One. As we are making progress there and also reducing the regulatory burden, it is infuriating to those that have dominated and controlled the agency for years.

He was surrounded by enemies who would, in his words, “resort to anything” to get him. That’s why he needed so much security, avoided unstructured encounters the public, and slept in a lobbyist’s condo or at home in Tulsa. He has no interest in encountering the enemy.

It was Pruitt’s undisguised tribalism that seems to shock even previous GOP EPA administrators — the unwillingness or inability to even go through the motions of propriety, much less broad consultation and transparent policymaking.

Tribalism explains why, when he came under political heat, Pruitt fled to friendly right-wing media outlets to do interviews. (The strategy did not go well for him when he ran into an informed, probing interview on [checks notes] Fox News?)

It did not occur to him to explain himself to the mainstream media; they were the enemy. Instead, his immediate instinct — one that reflects his long-time immersion in, and relationship to, right-wing media — was to play the victim of a liberal witch hunt.

It wasn’t hard to sell that narrative on the right. Conservative media were slavishly supportive of Pruitt from the beginning, culminating in a series of fawning profiles in purportedly respectable outlets like the Weekly Standard and National Review. (The author of NR’s lickspittle paean to Pruitt’s greatness? None other than Kevin D. Williamson.)

For the most part, right-wing media, think tanks, and industry groups rallied on Pruitt’s behalf. (A few, including Fox News host Laura Ingraham, began turning against him in recent weeks.) They didn’t care about establishment standards or the perception of procedural neutrality, any more than he did. He was of their tribe, advancing their agenda.

But tribalism ultimately couldn’t save Pruitt from himself

Being openly tribal has served Scott Pruitt well so far in his career, earning him the iron-clad support of industry, the far right, and Donald Trump alike.

Pruitt’s personal loyalty to Trump, his effectiveness in deregulating industry, his true-blue commitment to the conservative cause helped him keep his job for far longer than many expected.

But Pruitt’s own legal troubles seem to have finally caught up with him. According to his totally unapologetic resignation letter, Pruitt stepped down because of “unrelenting attacks” on him and his family.

But earlier this week, Democratic Congressman Ted Lieu alleged that the latest allegations suggest Pruitt may have committed one or more felonies:

In addition to being a national embarrassment, Scott Pruitt likely committed one or more felonies. The Federal Records Act would almost certainly apply to the calendar of @EPAScottPruitt. Concealing or falsifying a federal record is a felony.

It’s not clear what will happen with the investigations now that he’s out of office. But Pruitt may still have a long and comfortable career in conservative politics, where corruption in service to tribe is no vice at all.

Atlanta police shot and killed a 27-year-old black man outside a Wendy’s drive-through
Trump: The wall is mostly built. Also Trump: The shutdown for wall funding is “desperately needed.”
A CT scan costs $1,100 in the US — and $140 in Holland
One of America’s key voting rights groups plunged into chaos when it was needed most
What is camp? The Met seeks to find out through fashion.
How gay marriage won America