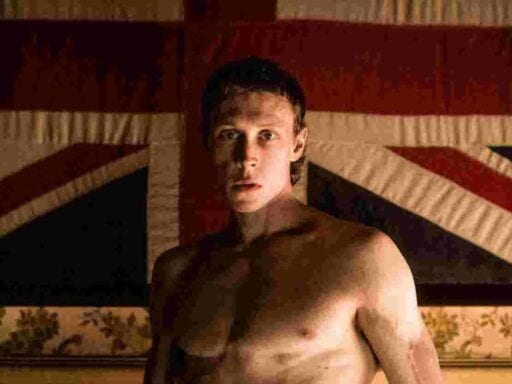 Bloody and breathless, the new film is a tale of violent cycles and violent ends.

True History of the Kelly Gang

The premise: In his own words, infamous Australian outlaw Ned Kelly explains what drove him toward what appeared — at least to outside observers — to be a mad, bloody end.

What it’s about: Director Justin Kurzel has had his ups (the 2015 Michael Fassbender-starring Macbeth) and downs (2016’s dismal Assassin’s Creed). But he has always seemed interested in what drives a man toward acts that seem to indicate he’s taken leave of his senses. In one of Kurzel’s best movies, the 2011 indie The Snowtown Murders, he examined an infamous group of serial killers, whose trial was one of the longest and most famous in the filmmaker’s native Australia.

For True History of the Kelly Gang, Kurzel returns to his homeland to tell another bloody story: that of Ned Kelly, who’s either a folk hero or a villainous outlaw, depending on whom you ask. Kelly (played by 1917 star George MacKay) was born to Irish parents, the third of eight children; his father, a thief, had been sent to Australia to serve a prison sentence and later settled there. Eventually his father died, leaving Ned, at age 12, the man of the house.

Ned Kelly is one of the most famous outlaws of all time, particularly in Australia, but Kurzel’s film tries to let him tell his own story, structured as a letter written to his son, while not glossing over the death that came in his wake. Through a cycle of abuse — from the English soldiers who took advantage of the family, to other thieves and robbers, to men sniffing around his mother’s door — Kelly learned to fight back and fight hard.

So when Kelly, now an adult and ex-convict, found himself on the run in the bush after murdering a police officer, he formed a gang of men who aimed to fight against the police in their country. Reasoning that if their foes considered them to be insane, those foes would be more scared of them, the “Kelly Gang” clothed themselves in frilly dresses and wore cylindrical bulletproof helmets. It’s an eerie sight.

Be warned: It’s a brutal watch from beginning to end, with plenty of scenes of bloodshed and abuse. But like last year’s film The Nightingale, it makes its point: Cycles of violence and abuse beget cycles of violence and abuse, and not just on the micro scale. A country’s violent history of oppression and thievery doesn’t go away in a generation. And the heroes it gets are often the ones it deserves.

Critical consensus: True History of the Kelly Gang earned favorable reviews from critics when it premiered at the Toronto International Film Festival in 2019. At Variety, Guy Lodge writes, “Lithe and volatile and recklessly stylized to the hilt, True History of the Kelly Gang has moves like Jagger, but a head still teeming with language and history.”

How to watch it: True History of the Kelly Gang is available on a wide variety of digital and on-demand platforms. See the film’s website for more details and links.

Why Brazil’s president Jair Bolsonaro joined a protest calling for a military coup
Silicon Valley is throwing Trump a fundraiser. They’d just rather not talk about it.
A secret recording of a Trump dinner confirms one of Lev Parnas’s allegations
It’s not just Twitch: The military has a history of using video games to reach young people
A Trump criminal probe in Georgia expands to include Sen. Lindsey Graham
Another top Democrat signals openness to abolishing the filibuster