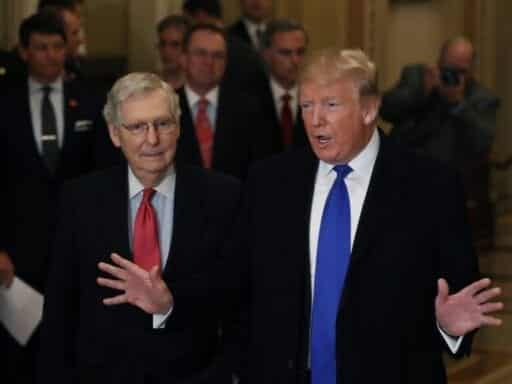 Share
Loading...
President Donald Trump speaks to the media while flanked by Senate Majority Leader Mitch McConnell after arriving at a Senate Republican weekly policy luncheon at the US Capitol on March 26, 2019, in Washington, DC. | Mark Wilson/Getty Images

For all the wrongdoing the Mueller report discovered, it didn’t find clear evidence of the animating charge: that Donald Trump knowingly colluded with the Russian government to influence the 2016 election. But with Ukraine, Trump appears to have done exactly what he was accused of before: asked a foreign government to help him win a presidential election, perhaps dangling military aid as an incentive.

That Trump would attempt such brazen collusion after the Mueller investigation shows the lesson he took from that experience is that he is unchecked and unaccountable. And perhaps he is right. After all, he has Senate Majority Leader Mitch McConnell to protect him.

The political conversation about impeachment has, understandably, focused on House Speaker Nancy Pelosi. The House acts first on impeachment, and she has been a bulwark against moving forward. But on Tuesday, she’d had enough. “Today I’m announcing the House of Representatives is moving forward with an official impeachment inquiry and directing our six committees to proceed with their investigation under that umbrella of impeachment inquiry,” she said. “No one is above the law.”

If Trump often acts like he is above the law, it is only because McConnell lets him. If McConnell decided to lead Senate Republicans in investigating and curbing Trump’s corruption, abuses of power, and obstruction of justice, Trump’s options would be to reform his behavior or be ejected from office.

Instead, on Tuesday, McConnell signaled that he intends to continue protecting Trump from accountability or sanction. Pelosi’s decision “simply confirms that House Democrats’ priority is not making life better for the American people but their nearly three-year-old fixation on impeachment,” McConnell said. The statement received little coverage because it was so utterly expected.

At the core of this is McConnell’s peculiar form of political shamelessness. This is the way McConnell and Trump are more similar than is often appreciated: they have both proven that the range of political action is disciplined less by external constraint than by a politician’s sense of shame — the degree to which they turn back in the face of public criticism, media opprobrium, elite backlash.

It was shamelessness, for instance, that let McConnell refuse to hold a hearing on Merrick Garland and then, grinning, admit that he’d fill a Supreme Court seat if one came up in 2020. McConnell’s predecessors held the same power he did and none of them attempted that maneuver. They weren’t restrained by laws or rules. They were restrained by temperament and a belief that to break the system was to betray the public.

It was shamelessness that let McConnell scotch the Obama administration’s effort to release a bipartisan statement revealing Russia’s efforts to influence the 2016 election and warning them to stop.

In 1999, faced with the question of Bill Clinton’s impeachment, McConnell said, “We can do the right thing. Or we can lower our standards and allow Bill Clinton to cling to public office — regardless of the consequences to our nation, to our system of justice, and to our future generations.” It is shamelessness that leads McConnell, today, to excuse Trump’s offenses and dismiss the consequences to our nation, our system of justice, and future generations.

McConnell has been handsomely rewarded for his behavior. He is bathed in power and can lay honest claim to having shaped American history. He delights in his reputation for ruthlessness and cheerfully shrugs off criticism. He fears primary challengers but nothing else. His disinterest in traditional forms of political accountability lures the system into virtually ignoring his behavior, as if he is a rock formation blocking a roadway, a natural obstacle that must be planned around.

I do not want to pretend that I have an answer for the problem of McConnell, but I do have a principle for weakening the McConnell Effect: McConnell’s refusal to do his constitutional duty cannot be the reason that other political officials refuse to do their constitutional duty.

The greatest trick McConnell ever pulled is convincing the American political system to take his behavior for granted. It is time to stop. McConnell swore the same oath to Constitution and country that Pelosi did. His refusal to take that oath seriously is a scandal, and should be treated as such.

Syria has confirmed its first cases of coronavirus. An outbreak there would be hell.
Star Wars: The Rise of Skywalker was designed to be the opposite of The Last Jedi
Racism and authoritarianism go hand in hand
Game of Thrones’ Missandei controversy, explained
500 fathers in immigration detention are going on hunger strike
Trump says there’s another tax cut on the way. We have no idea what he’s talking about.