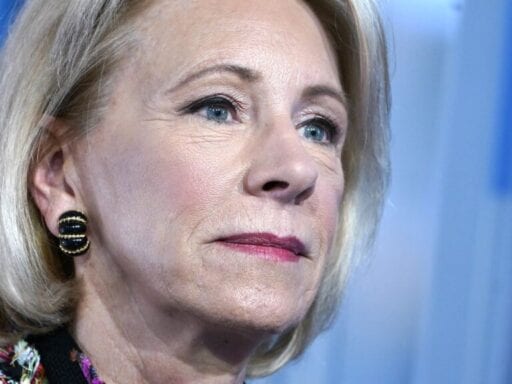 The proposal led to an outcry among survivors and their advocates: Because it would allow direct cross-examination of people who report sexual assault, many feared the changes would stop survivors from ever coming forward.

Since then, the Trump administration has been reviewing comments on the rules and developing a final version. And on Wednesday, with much of the country’s attention focused on the coronavirus pandemic and economic crisis — and with many schools closed — the Education Department released them.

The rules include many of the provisions that survivors’ groups have been worried about: the requirement that schools allow direct cross-examination, as well as a narrower definition of sexual harassment and permission for schools to use a standard of evidence seen as more favorable to those who are accused of harassment or assault.

The department says the changes are necessary to safeguard all students, including those who are falsely accused.

“Too many students have lost access to their education because their school inadequately responded when a student filed a complaint of sexual harassment or sexual assault,” Education Secretary Betsy DeVos said in a statement announcing the rule changes. “This new regulation requires schools to act in meaningful ways to support survivors of sexual misconduct, without sacrificing important safeguards to ensure a fair and transparent process.”

But advocates for survivors of sexual assault have strongly criticized the new rules. “Today, Betsy DeVos and the Trump administration have shown, once again, that they have no interest in supporting student survivors and their rights,” Sage Carson, manager of Know Your IX, a project combating sexual violence at schools and on college campuses, said in a statement.

Advocates have long been concerned about how the Education Department’s proposed changes would affect survivors. “We view these rules as requiring schools to use procedures that treat victims unfairly,” Shiwali Patel, director of Justice for Student Survivors and senior counsel at the National Women’s Law Center (NWLC), told Vox in April, when many anticipated that the final rules were imminent. Ultimately, she said, the changes will “make it harder for students who have experienced sexual harassment to come forward and to get the help that many need.”

Advocacy groups have also taken issue with the timing of the rules, which were finalized during a pandemic in which schools are struggling with the transition to online learning, the need to support homeless and food-insecure students, and other challenges. “In light of everything that’s happening, it’s quite shocking” that the Education Department would move forward with the rules now, Patel said.

The rules proposed in 2018 govern the implementation of Title IX of the Education Amendments of 1972, which bans discrimination on the basis of sex in educational settings. Over the years, courts have ruled that sexual harassment and assault are forms of gender discrimination prohibited by Title IX. In 2011, the Obama administration released what is now known as the “Dear Colleague” letter, explaining how it would enforce Title IX.

The letter was not a new law — rather, it was guidance explaining how schools should comply with existing legislation. Among its core tenets was that in order to comply with Title IX, schools had to use a “preponderance of the evidence” standard when deciding sexual harassment and assault cases, meaning the accused would be found responsible if the evidence showed it was more likely than not that the violation occurred. Prior to the letter’s release, some schools had used a higher “clear and convincing” evidence standard, which put a greater burden on accusers to show that the accused had committed misconduct.

Many survivor advocates say that, while not perfect, the 2011 letter signaled a new seriousness about sexual assault at the federal level. In the years that followed, the issue got massive public attention, with many students holding their schools legally accountable for failing to keep them safe.

But accused students and the groups advocating on their behalf have long argued that the Obama-era guidance is unfair to them. DeVos has, apparently, been sympathetic to this criticism, meeting in July 2017 with groups that support the rights of the accused, including the National Coalition for Men (NCFM), a men’s rights group.

Then in September 2017, DeVos rescinded the 2011 Obama guidance. The move was part of a larger push by the Trump administration — and the Education Department in particular — to roll back Obama-era anti-discrimination protections, as Jeannie Suk Gersen noted at the New Yorker. Under DeVos, the department also got rid of guidelines recommending that schools allow transgender students to use the bathroom that matches their gender identity, as well as guidance supporting affirmative action and detailing disabled students’ rights.

In the case of sexual assault, the Education Department in November 2018 released proposed rules to replace the 2011 directive. The proposal inspired immediate pushback from survivors’ groups, who argued it would unfairly tilt the process of investigating sexual harassment and assault in favor of the accused. Thousands of survivors and advocates submitted comments to the proposed rules, contending that the changes would jeopardize the ability of students and others to report harassment and receive justice.

“I was a victim of sexual assault at a time when there were no protections at all,” one commenter wrote, noting that the rules “clearly favor saving an organization from possible liability. These rules have nothing to do with what the right thing is to do.”

Since then, the Education Department has been reviewing those comments and working on the final rules. Those rules, expected for months, were released on Wednesday. Some of the biggest changes are the following:

They require schools to allow direct cross-examination of both parties at Title IX hearings. The 2011 guidance discouraged direct cross-examination, as “allowing an alleged perpetrator to question an alleged victim directly may be traumatic or intimidating, thereby possibly escalating or perpetuating a hostile environment.” Instead, some schools, like the College of New Jersey, allow accused students to pose questions to a neutral hearing administrator, who can relay them to the reporting student. Under the new rules, however, a lawyer or other representative of the accused will be allowed to directly cross-examine the reporting student. The rules do allow both students to sit in separate rooms and answer questions remotely, if either requests it.

They raise the bar for what counts as sexual harassment under Title IX. The 2011 guidelines defined sexual harassment as “unwelcome conduct of a sexual nature.” But the new rules set a stricter standard for what constitutes harassment, defining it as “unwelcome conduct that a reasonable person would determine is so severe, pervasive and objectively offensive that it denies a person access to the school’s education program or activity.” According to the NWLC, this change violates the very purpose of Title IX.

“Title IX was enacted to ensure that sex discrimination, including sexual harassment, would never be the end of anyone’s education,” Patel told Vox. But the change to the definition of harassment could mean that students would not have grounds for a complaint until they were essentially being driven out of a class or school because of it. “It shouldn’t rise to that level before a school would have to take any action,” Patel said.

Advocates are concerned about the impact on survivors

“The standard for the school to have to take action is so high, so they would be ignoring a lot of reports that come to them,” she explained. “But even if the report does meet this high standard, the survivors would have to go through a process that’s just unfair to them.”

The NWLC and other groups also worry that the rules are being released now, in the midst of the coronavirus pandemic. The group, along with more than 200 others, sent a letter to the White House in March urging it to suspend rulemaking around Title IX during the crisis.

“As schools scramble to create online resources and systems and otherwise reinvent themselves to meet this moment, they are also simultaneously channeling their resources to help meet these student needs in an unprecedented time of crisis,” the letter stated. The signatories also wrote that the Education Department “should be utilizing its limited time and resources to provide much-needed relief for students and schools — not to codify a proposed rule that would make it extremely difficult, confusing, and in some cases impossible for institutions to ensure that students feel safe in school.”

However, the administration is going forward with the rules anyway. They are scheduled to go into effect on August 14, when many schools across America are preparing for the fall term, while (likely) still figuring out what the pandemic means for them and their students.

The new rules will make it harder for survivors to report just “as students struggle to find housing, keep up with online classes, and pay rent as the unemployment rate soars,” Carson, the Know Your IX manager, said in her statement. “What these students need is support, not another attack from DeVos and Trump.”

Why this font is everywhere
PBS and Politico journalists are tag-teaming December’s Democratic debate
“I can’t sit this one out”: 6 expats on why voting from abroad is so important this year
Vox Sentences: Your Vox guide to the first debate
The Mueller report’s biggest mystery
What the anti-stay-at-home protests are really about