Trump admits he discussed Biden with Ukraine, but says he was just worried about corruption 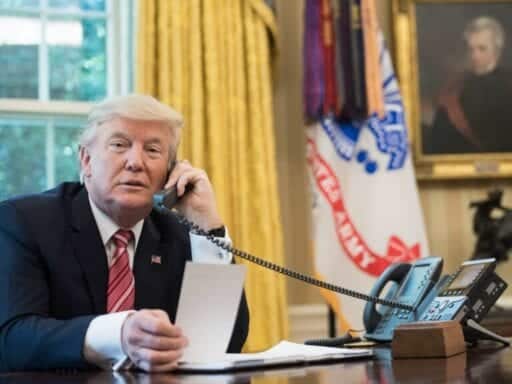 Republicans are now calling for an investigation into Biden as Democrats call for impeachment.

President Trump confirmed on Sunday that he discussed the family of former Vice President Joe Biden during a phone call with Ukraine’s president that sits at the center of a whistleblower’s complaint about alleged abuse of power within the White House. The president argued that he did not do anything wrong during the call, but several prominent Democratic lawmakers are calling the whistleblower complaint grounds for impeachment.

Speaking to reporters Sunday before heading to a rally with Indian Prime Minister Narendra Modi, Trump described his July 25 conversation with Ukrainian president Volodymyr Zelensky as “perfect.” The Wall Street Journal recently reported that Trump attempted eight times on the call to pressure the foreign leader to launch an investigation into Biden’s son, Hunter, and his business ties to Ukraine, an allegation that Trump has firmly denied.

The conversation was “largely [about] the fact that we don’t want our people like Vice President Biden and his son creating to the corruption already in the Ukraine,” Trump told the gathered reporters.

Trump, looking very red, basically admits he asked Ukrainian President Zelensky to look into Biden during call that’s part of whistleblower complaint: “It was largely [about] fact that we don’t want our people like VP Biden & his son creating to the corruption largely in Ukraine” pic.twitter.com/2hvkTbHSJl

Later, he told reporters he “had every right to” bring up Biden because “we don’t want a country that we’re giving massive aid to to be corrupting our system.”

That aid is central to questions over Trump’s call: $250 million in assistance had been due to that country over the summer. Its release had been delayed, but Trump agreed to send it to Ukraine this month, facing pressure from Congress. That money has the president’s critics concerned he withheld the aid in an attempt to convince his Ukrainian counterpart to investigate Biden.

Biden is a leading frontrunner for the Democratic presidential nomination, and damaging information could hurt his candidacy. There is absolutely no evidence he was involved in his son’s business dealings in Ukraine, nor is there evidence that he did anything illegal, despite President Trump’s suggestions otherwise. Biden has called for a transcript of the phone call to be released, saying in a statement that the alleged behavior is evidence “there is truly no bottom to President Trump’s willingness to abuse his power and abase his country.”

Trump signaled he is open to doing so Sunday in Houston, Texas, telling reporters “it would be fine” to release the transcript; he also said he might “give it to a respected source, they can look at it,” but did not specify whether he meant a news source he sees as credible or to someone within the government. He again stood by his words, however, saying of the transcript, “what I said was so good … everybody will say that.”

As Republicans defend Trump, some Democrats are calling for impeachment

Democrats aren’t so sure that what the president said was “so good.” Many are concerned he may have attempted to use his office to have a foreign country interfere in the 2020 election by providing some sort of opposition research in exchange for aid. And as reports and details about that complaint have emerged over the last week, many Democrats have begun calling for consequences, up to and including impeachment.

Impeachment “may be the only remedy,” Rep. Adam Schiff (D-CA), who chairs the House Intelligence Committee and has not previously come out in support of impeachment, said on CNN’s State of the Union on Sunday.

Schiff is a key figure in concerns about the president’s actions on the call: He is the person who called for the release of the whistleblower report after Acting Director of National Intelligence Maguire failed to disclose it to Congress, as required by law, and his committee will investigate the allegations the president faces.

If the whistleblower complaint is accurate it “would be, I think, the most profound violation of the presidential oath of office, certainly during this presidency, which says a lot,” Schiff added.

On NBC’s Meet the Press, Sen. Chris Murphy (D-CA) agreed that Congress had to take the allegation seriously.

“If we do have the evidence from this whistleblower that the president indeed did try to bully a foreign power into affecting our elections, then we have to do something about it,” he said.

Some Democratic presidential candidates, like Sen. Elizabeth Warren and former HUD Secretary Julián Castro, argue that what Democrats should do is to begin impeachment proceedings. Biden has not joined these calls, despite his prominence within the whole affair — instead, he has said Trump must be investigated.

Biden’s response is in line with that of House Speaker Nancy Pelosi, who came out against the idea of impeachment on Friday. On Sunday, she released a “Dear Colleagues” letter saying that she expected Acting Director of National Intelligence Joseph Maguire to turn the full whistleblower complaint over to Congress, and called on Republicans to support the investigation into the matter.

“If the Administration persists in blocking this whistleblower from disclosing to Congress a serious possible breach of constitutional duties by the President, they will be entering a grave new chapter of lawlessness which will take us into a whole new stage of investigation,” the letter reads in part.

On Twitter, Rep. Alexandria Ocasio Cortez (D-NY) argued her fellow Democrats ought to take a tougher stance on the complaint, writing that the Democratic failure to coalesce around impeachment was worse than the behavior itself:

At this point, the bigger national scandal isn’t the president’s lawbreaking behavior – it is the Democratic Party’s refusal to impeach him for it.

She faced some criticism for that assessment, but defended her stance by saying, “It is one thing for a sitting president to break the law. It’s another to let him.”

It is one thing for a sitting president to break the law. It’s another to let him.

The GOP’s silence & refusal to act shouldn’t be a surprise. Ours is.

Republicans responded to criticism of the president by standing by his claim that he’s done nothing wrong, and by attempting to turn attention on Biden.

Treasury Secretary Steven Mnuchin denied any kind of improper attempt to trade aid money for an investigation into the Bidens on Meet the Press, and said the fact Ukraine received $140 million in aid on top of the promised $250 million it was not expecting did not mean that country was given a bonus for agreeing to investigate Biden.

“There was no connection,” Mnuchin said. When host Chuck Todd then pressed Mnuchin on the additional aid money, Mnuchin dismissed that as “details.”

Mnuchin doesn’t have a response when Chuck Todd asks him if he can explain “how all of the sudden when the [Ukraine] aid got released, more money showed up. Where did [it] come from?…They got an additional $140m they didn’t expect”

Sen. Lindsey Graham told Fox News on Sunday he believes there should be an investigation into Biden — a domestic one.

“I’m calling for somebody in the Justice Department to look at all things Ukraine,” Graham said. “I’m hoping the Department of Justice will look at the Biden-Ukraine connection, like we looked at the Trump-Russia connection.”

House Leader Kevin McCarthy also referenced the investigation into Russia in an appearance on Fox News on Friday, and claimed Democrats are working to distract the public from scrutinizing Biden’s record: “Wouldn’t it be interesting politically, if you wanted people not to look at what Biden was doing to try to bring something once again alleged against this president, as they’ve done time and again because they don’t like the outcome of an election.”

While many Republicans circled the wagons, at least one — Sen. Mitt Romney — called the affair “troubling in the extreme” on Twitter, and wrote, “Critical for the facts to come out:”

If the President asked or pressured Ukraine’s president to investigate his political rival, either directly or through his personal attorney, it would be troubling in the extreme. Critical for the facts to come out.

As Democrats and Republicans retreat to their habitual rhetorical corners, a number of questions about the whistleblower’s complaint remain: We don’t yet know the identity of the person who made it, or the details of any other other allegations it may contain. It is also unclear what kind of consequences the president would face if these allegations are found to be true, particularly given impeachment is not, by and large, favored by voters and that it would be blocked by Republicans in the Senate.

Thus far, the White House has not cooperated with any investigations into the whistleblower’s complaint. Refusing to comply with congressional requests has been a successful tactic for the Trump administration in stalling other investigations into alleged misconduct, and given the president has already faced accusations he conspired with a foreign power to influence an election, he is in familiar territory. As are all Americans, for whom the specter of foreign election interference could hang for another electoral cycle.

The World War II food memoir that’s getting me through life in a pandemic
The Labor Department is investigating the visa program Mar-a-Lago uses to hire foreign workers
How to squirrel-proof the power grid
Chris Messina goes blond in a blatant play to join the Hollywood Chrises
Eater at Home: How to stock a pantry, the best cookbooks, and more
Selfie face distortion is driving people to get nose jobs