Trump again boosts a baseless conspiracy theory, this one about Jeffrey Epstein 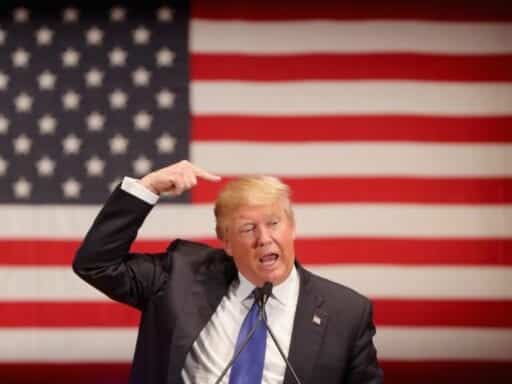 Trump contradicted his own officials, retweeting a right-wing conspiracy about Epstein.

Epstein was found dead in his jail cell in Manhattan Saturday morning while he was awaiting trial for sex trafficking. He was accused of sex crimes against dozens of young girls, who he allegedly raped and molested over years at his luxury properties across the country.

The Bureau of Prisons — a law enforcement arm of Trump’s own Department of Justice, which was holding Epstein — said in a statement he had died by apparent suicide.

But rather than tweet a statement confirming his DOJ’s findings, Trump promoted a theory countering his administration’s statement by retweeting a video by a conservative personality who simultaneously pushed back against the conspiracy theory that Trump — who was at one time an associate of Epstein’s — killed the financier while pushing the conspiracy theory that Bill Clinton (who was also an Epstein associate) was responsible for the sex offender’s death.

The conservative personality captioned the tweet “we know who did this” and used the hashtags ClintonBodyCount (a reference to a long-running conspiracy theory that originated in the 1990s which claims Bill and Hillary Clinton secretly kill their enemies) and ClintonCrimeFamily.

Died of SUICIDE on 24/7 SUICIDE WATCH ? Yeah right! How does that happen#JefferyEpstein had information on Bill Clinton & now he’s dead

I see #TrumpBodyCount trending but we know who did this!

Beyond the unsubstantiated claims of Bill Clinton’s involvement in Epstein’s death, the video also contains misinformation; for instance, it says that Epstein died while being monitored on suicide watch. Officials have said Epstein in fact was not on suicide watch when he died.

There is absolutely no evidence to support the idea that Epstein was murdered. But here’s why people are connecting him to Clinton (and to Trump) online, according to reporting by Vox’s Andrew Prokop:

In the years before Epstein’s 2007 guilty plea to solicitation of prostitution with a minor, he was known for “collecting” friendships with many noteworthy or influential people — including Clinton and Trump, who were social acquaintances. Clinton took international trips on Epstein’s plane in the early years of his post-presidency, including a trip to several African countries with Kevin Spacey and Chris Tucker.

Trump, meanwhile, reportedly attended Epstein-hosted events in New York and Florida, as Epstein patronized the Mar-a-Lago Club. In 2002, Trump even gave a remarkable on-the-record comment about Epstein to a New York magazine journalist, calling him “terrific” and adding that he “likes beautiful women as much as I do, and many of them are on the younger side.”

Epstein’s relationship with Clinton led to the revival of the Clinton Body Count conspiracy theory following his death. Vox’s Dylan Matthews traced the meme to its origins:

According to a history and debunking first published by Snopes in 1998, the body count meme originated in 1993 with Indianapolis lawyer and militia movement activist Linda Thompson, who compiled a list of 34 people connected to the Clintons who had passed away and titled it, “The Clinton Body Count: Coincidence or the Kiss of Death?” William Dannemeyer, a notoriously homophobic then-retired Congressman from Orange County, California, picked up the list, trimmed it to 24, and sent it Congressional leadership in 1994 as he ran for the US Senate.

Thompson provided — by her own admission — “no direct evidence” that the Clintons were responsible for any of the deaths, and Snopes provides a comprehensive account of each death, most of which were easily explained heart attacks, plane crashes, or suicides.

As Matthews writes, the conspiracy theory took off following the death by suicide of an official who was connected to a number of Clinton administration scandals. Many prominent conservatives — including members of Congress — rejected the idea that the official, Vince Foster, had died by suicide, arguing that he had been killed. These arguments further fed the Clinton Body Count conspiracy as did the easily explained deaths of other members of the Clinton administration and Democratic Party officials in the Clinton’s orbit.

After Epstein’s death Saturday morning, the competing #TrumpBodyCount popped up in response to the Clinton theories. Like Clinton, Trump has been linked to Epstein, and he faced an allegation that he’d raped a 13-year-old girl while at one of Epstein’s parties. Right-wing personalities, including Trump’s son, Donald Trump Jr., were quick to use the hashtag’s popularity to promote the claim that Twitter is biased against conservatives, something there is no evidence for.

As is the case with the Clinton Body Count conspiracy theory, there is absolutely no evidence whatsoever to suggest President Trump is was involved in Epstein’s death.

Trump is no stranger to spreading conspiracy theories, especially when they involve his political adversaries. He claimed in 2017 that former President Barack Obama wiretapped Trump Tower. And before that, he spent years promoting the baseless claim that Obama was born in Kenya.

He’s said, without evidence, that a million people voted illegally for Hillary Clinton in 2016 and that Sen. Ted Cruz’s dad was connected to the man who killed former President John F. Kennedy.

It is therefore unsurprising that Trump would boost the conspiracy theory du jour, and given his Department of Justice said Epstein died by suicide, his retweet also follows a pattern of the president promoting ideas that contradict his administration’s experts.

What happens to the Supreme Court (and the Constitution) if Trump wins
Donald Trump seeks to rally Republicans around border security message for fall midterms
The mystery behind Trump’s Twitter capitalization habit, somewhat explained
In election night speech, Biden says he’s “on track” to win the 2020 election
Meghan Markle’s fashion line shows how she’s redefining her role as a royal
Why we shouldn’t rely on Silicon Valley for face masks