Trump-allied pastor: Reagan was a womanizer, too 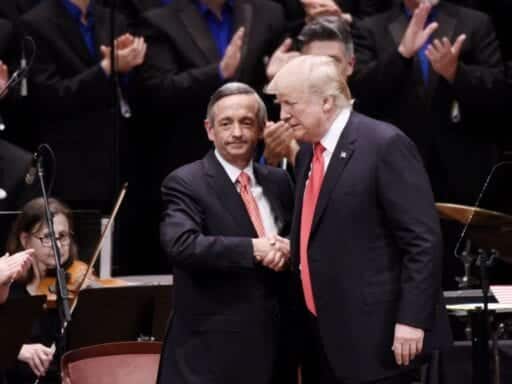 Days after the news broke that President Donald Trump’s former lawyer Michael Cohen had audio of Trump discussing a payoff to a woman with whom he allegedly had an affair, one of Trump’s top evangelical allies came to the president’s defense — with an insult to former President Ronald Reagan. Robert Jeffress, the pastor at megachurch First Baptist Dallas, told Fox News’ Ed Henry that Trump’s adultery made him no worse than Reagan.

“The reason we supported President Reagan was not because we were supporting womanizing or divorce,” Jeffress told Henry. ”We supported his policies. … We’re not under any illusion that we were voting for an altar boy when we voted for President Trump. We knew about his past. And by the way, none of us has a perfect past. We voted for him because of his policies.” (Reagan has never been publicly accused of being unfaithful to his second wife Nancy Reagan, but some biographers have said that he was something of a lothario in Hollywood during his years an actor and that he cheated on his first wife, Jane Wyman. In 1991, he was also accused of sexual assault by actress Selene Walters four decades prior.)

Jeffress serves on Trump’s unofficial evangelical advisory council, and is a frequent advisor to, and vocal supporter of, the president. Jeffress once held a de facto Trump rally (complete with a choir singing “Make America Great Again”) in his church during a service. Earlier this year, he traveled to Israel to speak at the opening of the controversial US Embassy in Jerusalem, telling his audience that Trump “stands on the right side of you, O God,” when it came to Israel.

According to the New York Times, the Cohen tapes depict Trump discussing payments to Karen McDougal, a former Playboy model who says she had a yearlong affair with Trump in 2006, shortly after his wife, Melania, gave birth to their son Barron. The tapes were seized by the FBI in a raid earlier this year.

Jeffress is far from the only evangelical leader to give Trump a pass on extramarital dalliances. Last year, Tony Perkins of the Family Research Council told interviewers that he gave Trump a “mulligan” — a golfing term for a “do-over” — on his alleged affair with adult film star Stormy Daniels, which also reportedly occurred in 2006. Like Jeffress, Trump’s personal life, for Perkins, was barely deserving of censure, and any potentially un-Christian behavior was deemed to be safely “in the past.”

It’s worth noting that evangelicals’ approach to Trump’s sex life is drastically different from their collective reaction to that of Bill Clinton two decades earlier. At that time, the Christian Broadcasting Network’s Pat Robertson called Clinton a “debauched, debased and defamed” leader who had turned the Oval Office into a ”playpen for the sexual freedom of the poster child of the 1960s.”

These days the Christian Broadcasting Network frequently runs pro-Trump content (including a segment comparing him to the Biblical king Cyrus, chosen by God to deliver the Jews out of exile). After Perkins’s controversial comments on Stormy Daniels, for example, CBN interviewed him about his support of Trump, functionally giving him a platform to double down on his “mulligan” remarks.

It’s not just evangelical leaders, either. According to surveys conducted by the Public Religion Research Institute (PRRI) in October 2016, a majority of Americans no longer think a political candidate’s private life has any bearing on his fitness for office. A full 72 percent of white evangelicals believe that politicians who behave immorally in their private lives can behave ethically in office. In 2011, that figure among white evangelicals was just 30 percent.

Jeffress’s comments, therefore, should be understood in a much wider context: the degree to which many evangelicals have shown a willingness to disregard politicians’ personal or moral failings as long as they enforce conservative policies on issues like abortion and LGBTQ issues. After all, when it comes to abortion, Trump pledged to evangelical voters that he would appoint Supreme Court judges who would “automatically” overturn Roe v. Wade.

Trump’s firm support from evangelicals is made clear in this recent Washington Post article in which Alabama churchgoers tell reporter Stephanie McCrummen that Trump was “being molded by God for the role” of President in order to ensure a more important goal: “the survival of the Christian nation.”