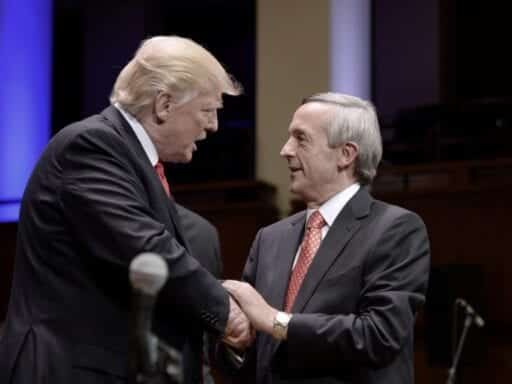 One of Trump’s closest evangelical allies gave a sermon on Sunday titled “America is a Christian Nation” while protesters gathered outside.

The founding fathers, Pastor Robert Jeffress told listeners at First Baptist Church Dallas, were predominately Christians who wanted to found a Christian country and believed that “our future success depends on our country being faithful to those eternal truths of God’s will.”

Pastor Robert Jeffress is an unofficial leader of Trump’s de facto evangelical advisory council and pastor at the Dallas megachurch, which has about 12,000 members. On Sunday, at a worship service rally he termed “Freedom Sunday,” Jeffress offered his flock the opportunity to — in the words of First Baptist Dallas’s website — “celebrate our freedom as Americans and our freedom in Christ with patriotic worship.” According to promotional materials on social media for the event, the Freedom Sunday service was also scheduled to include a “salute to our Armed Forces.”

Jeffress and First Baptist had faced additional controversy last week over a series of billboards the church had created stating that “America is a Christian Nation.” The billboard company, Outfront Media, ultimately took down the signs after widespread public outcry, including editorials in the Dallas Morning News.

This is far from the first time that Jeffress has used that pulpit to make expressly pro-Trump, political points. Last year, he led a “freedom rally” in which the words of the Trump campaign slogan “Make America Great Again” were made into a religious hymn. (The sheet music has since been made available for pastors to download for their own church choir.) He has frequently suggested that Trump was chosen by God, and — as a result of the Bible verse Romans 13 — has the “authority to do whatever” he wants, up to and including starting a nuclear war. At last month’s opening of the new, controversial US Embassy in Jerusalem, Jeffress told audiences that Trump stood “on the right side of God.”

“Listen long enough to any … left-wing group and you’ll believe [the secular] history of America,” Jeffress said in his sermon. “You will come to believe that America was founded by men with a large diversity of religious belief … all united by one dream. They wanted to build a secular nation. … Their goal was to build a large unscalable wall around this country … that would protect this country from any religious influence seeping into public life.”

“That version of history,” he went on to say, “belongs in the same category as the story of George Washington and the cherry tree. It is a complete myth! … America was founded predominantly … by Christians who wanted to build this foundation, this Christian nation, on the foundation of God’s will.”

Jeffress’s language reflects a common trope among the religious right, one proliferated by popular figures like David Barton — whose books have been recalled for their major factual inaccuracies — and often repeated by many politicians. The idea that America was founded predominately as a Christian nation (and that the liberal agenda is pushing a false and ahistorical narrative of secularism) is central to Jeffress’s argument.

At a time when Christian leaders from evangelical, mainline Protestant, and Catholic denominations are all coming together to condemn Trump’s policy of separating migrant families at the border, Jeffress’s service is a sobering reminder that, for many on the Christian right, Trumpism, jingoism, and evangelical Christianity are inextricable from one another. Jeffress has consistently been among the most prominent advocates of Christian nationalism, and of the notion that Christian observance demands submission to the Trump presidency.

This latest rally shouldn’t, therefore, be seen as surprising. Instead, it’s a reminder that many on the Christian right still see Trump as their advocate in government, and that people like Jeffress continue to drive their message home.

According to the Fort Worth Star-Telegram, about 20 protesters gathered outside the church to protest the conflation of American patriotism and Christianity.

“Many people believe that this is a Christian nation. … This idea is spread by many religious leaders and media. However, this is absolutely not the case, and we want to set the record straight,” Courtney Stewart, president of Metroplex Atheists, told the paper.

Jeffress appeared to address the protestors during the service, telling his audience: “Now perhaps you’ve heard there is a little bit of controversy over what you’re doing today. … I’m so gratified by the outpouring of support from Christians all over this country.”

One source of support? Vice President Mike Pence. Jeffress read aloud a letter from Pence, in which Pence told Jeffress’s audience that he was “grateful for your work and witness.”

“As President Trump and I both know,” the letter said, “America’s strength ultimately comes from our freedom and from our foundation of faith in this nation. We know that no podium we ever stand behind will be as important as the pulpits pastors stand behind every Sunday.”

Why there’s still no single, accurate coronavirus death rate
A crash course in contact tracing: What it’s like to track Covid-19
The case for capping all prison sentences at 20 years
Morning Brew, the business newsletter publisher for millennials, is in talks to sell itself to Busin...
9 questions about coronavirus and masks, answered
Alabama’s and Mississippi’s troubling Covid-19 curves, briefly explained