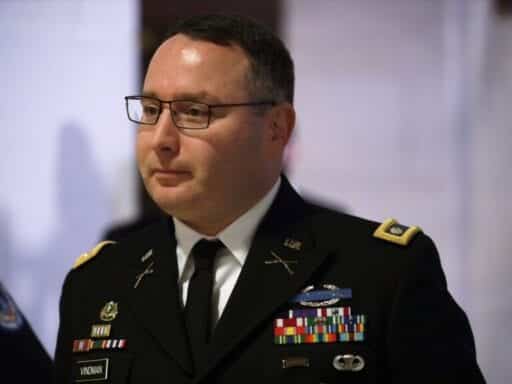 Share
Loading...
Army Lieutenant Colonel Alexander Vindman, director for European Affairs at the National Security Council, arrives at a closed session before the House Intelligence, Foreign Affairs, and Oversight committees on Tuesday. Vindman was on Capitol Hill to testify for the ongoing impeachment inquiry against President Donald Trump. | Photo by Alex Wong/Getty Images

Lt. Col. Vindman was born in Ukraine, but he’s a decorated veteran of the American armed forces.

Ahead of Lt. Col. Alexander S. Vindman’s testimony to House impeachment investigators about his concerns regarding Trump’s dealings with Ukraine, President Donald Trump’s media defenders wasted no time smearing the lieutenant colonel and Purple Heart recipient as some sort of Ukrainian double agent. These efforts illustrate the swift boat-style lengths Trump supporters are willing to go to in order to justify his efforts to get the Ukrainian government to do political favors for him — ones that prompted the aforementioned impeachment inquiry.

On Monday evening, the New York Times broke news that Vindman, the top Ukraine expert on the National Security Council, plans to testify on Tuesday that he directly heard Trump “appeal to Ukraine’s president to investigate one of his leading political rivals, a request the aide considered so damaging to American interests that he reported it to a superior.”

The revelation that a decorated veteran — and one who was on Trump’s fateful July call with Ukrainian President Volodymyr Zelensky — had deep concerns about Trump’s conduct undercuts the “hearsay” defense Trump has made against the intelligence community whistleblower who first came forward with concerns about that conversation. And it prompted some observers to wonder how Trump defenders could possibly frame Vindman as an anti-Trump partisan.

Tomorrow, Congress hears from an active army officer who expressed concerns up his chain of command after listening in on Trump’s call with President Zelensky. Trump won’t be able to dismiss his as a partisan & he has direct testimony to offer. https://t.co/NqMbNTsVmZ

The Times, for its part, noted that Vindman’s opening statement “is full of references to duty and patriotism,” and given his military service, he “could be a more difficult witness to dismiss than his civilian counterparts.”

But Trump’s defenders in the media wasted no time getting busy trying to do just that. On Monday’s edition of Fox News’ Ingraham Angle, host Laura Ingraham and former George W. Bush-era Deputy Assistant US Attorney General John Yoo teamed up to demean Vindman as some sort of Ukrainian double agent, citing the fact he was born there before moving to the US as a child.

“Some people might call that espionage,” Yoo said, referring to the fact that Vindman reportedly advised Ukrainian officials on how to deal with Trump’s personal lawyer Rudy Giuliani, who earlier this year was the White House’s unofficial point person for Ukraine policy.

Oh my God, look at the spin they are using right now, actually saying that Vindman is a Ukrainian double agent….this is so freaking bananas pic.twitter.com/Oxpju5W23N

By Wednesday morning, the smear Ingraham and Yoo alluded to had become a standard talking point for Trump defenders.

On CNN, retired Republican congressman-turned-contributor Sean Duffy said of Vindman, “We all have an affinity to our homeland where we came from. … He has an affinity for the Ukraine. And on Fox & Friends, host Brian Kilmeade said, “We also know [Vindman] was born in the Soviet Union, emigrated with his family. Young. He tends to feel simpatico with the Ukraine.”

Brian Kilmeade on Army Lt. Col. Vindman: “We also know he was born in the Soviet Union, emigrated with his family. Young. He tends to feel simpatico with the Ukraine.” pic.twitter.com/mfjg9NUXSd

Vindman’s opening statement indicates he anticipated this line of attack. In it, he says, “I am a patriot, and it is my sacred duty and honor to advance and defend our country irrespective of party or politics.”

Regarding Trump’s call with Zelensky, he says, “I did not think it was proper to demand that a foreign government investigate a US citizen, and I was worried about the implications for the US government’s support of Ukraine. I realized that if Ukraine pursued an investigation into the Bidens and Burisma, it would likely be interpreted as a partisan play, which would undoubtedly result in Ukraine losing the bipartisan support it has thus far maintained.”

While Trump’s defenders are making dark insinuations about Vindman’s concern that the US sustain its support for Ukraine, it should be noted that supporting Ukraine against Russian aggression was a pillar of American foreign policy until quite recently.

Trump, for his part, has thus far avoided impugning Vindman’s patriotism or suggesting he’s some sort of double agent, but on Wednesday morning, Trump posted a tweet complaining that “people that I never even heard of” are testifying about the call. Another tweet that alluded to Vindman wondered this:“[W]as he on the same call that I was? Can’t be possible! Please ask him to read the Transcript of the call. Witch Hunt!”

The memo about the call released by the White House, however, actually corroborates Vindman’s account of it.

4 winners and 2 losers from the 2019 State of the Union
Democrats’ $3 trillion opening bid for the next stimulus package, explained
Trump wants to talk about anything but his coronavirus response. His attacks on the WHO show it.
How a clunky, retro hair dryer suddenly went viral
Muslims love Jesus, too: 6 things you didn’t know about Jesus in Islam
Netflix’s Russian Doll is a show you should know nothing about except how good it is