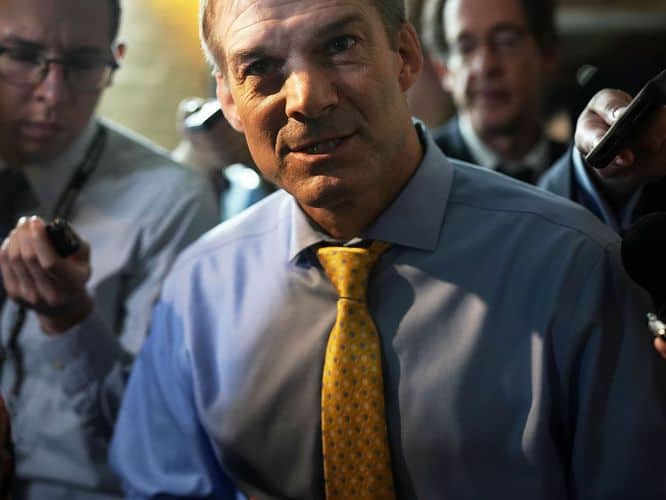 The race for the next Republican House leader might have just become very complicated.

One of the House’s most conservative lawmakers has announced his bid for Republican House Speaker: Ohio Rep. Jim Jordan, a founding member of the House Freedom Caucus, said Thursday that he will join the race to replace House Speaker Paul Ryan — a campaign that might complicate the Republican speakership fight in the months ahead.

“President Trump has taken bold action on behalf of the American people,” Jordan said in a statement. “Congress has not held up its end of the deal, but we can change that.”

Ryan, who is not running for reelection, says he plans to keep his leadership post until he retires in January, but top House Republicans are already trying to position themselves as his heir apparent.

Jordan, a close Trump ally, is one of the loudest conservative voices against the FBI’s investigation into Russian election meddling and backed a resolution to impeach Deputy Attorney General Rod Rosenstein. The Ohio Republican has been under intense scrutiny in recent months after several former Ohio State wrestlers accused Jordan of turning a blind eye to rampant sexual abuse at the university while he was an assistant wrestling coach there in the late 1980s — allegations that Jordan has vehemently denied.

Jordan has been floating a leadership run for some time, but even his conservative colleagues admit that as one of the most right-wing members of the party, it’s unlikely Jordan has enough support in the House to win the speakership altogether. But he does have enough votes to sway who the speaker is.

Whoever wins the speakership needs a simple majority of the entire House — about 218 votes. Assuming Democrats will stand united against whomever Republicans nominate, any Republican faction with roughly two dozen votes can stop a possible nominee in his or her tracks — and Jordan’s Freedom Caucus has 40 members.

There are already two frontrunners in this race for the speakership: Majority Leader Kevin McCarthy, a California Republican who has cultivated a close relationship with President Donald Trump and had ambitions for the job in the past; and Majority Whip Steve Scalise, the conservative Louisiana Republican who gained national attention after he was shot at a congressional baseball practice last summer and is the only Southern Congress member in leadership.

Ryan has endorsed McCarthy, and Scalise has said publicly that he would not run against McCarthy, but there are already rumblings that McCarthy doesn’t have the votes.

“If we control enough votes to veto who the next speaker is going to be, do you think it is going to be someone who engages less with the Freedom Caucus?” asked Mark Meadows (R-NC), the group’s chair, when presented with the possibility of a more moderate Republican leader nominee.

But underlying all this jockeying is a tacit understanding that, come November, Republicans may not have to elect a speaker at all. If Republicans lose the majority, they will only have to pick a minority leader — a very different job that requires a different skill set and only needs a majority of support within the conference.

Republican candidates are gearing up for a months-long speakership campaign

Unless Ryan decides to step down from the speakership between now and November — which is unlikely — Republicans are gearing up for several months of campaigning for the top leadership spot.

So far, both McCarthy and Scalise, who are in Ryan’s leadership team, say they are just focused on keeping the Republican House majority in 2019. But behind the scenes, staffers will tell you the two lawmakers have been trying to build coalitions. Republican members say they are already “sizing up” McCarthy and Scalise as the possible replacements for Ryan, according to Politico.

McCarthy, the California Republican who has been the House majority leader since 2014, is both close to Ryan in leadership and a close ally of President Donald Trump. Unlike Ryan, McCarthy has never been known as someone who will lead a policy debate, but he’s known for being well-liked and a skilled political tactician — and has definitely had ambitions for the speakership.

He fell short in his campaign to succeed John Boehner, mired by rumors of an extramarital affair and a revolt from members of the House Freedom Caucus, who said McCarthy would be too close in style to Boehner.

Scalise, meanwhile, has always been seen as the more conservative policy ideologue compared to McCarthy. He’s from the South, something some conservative members of the conference value — for all the pros and cons that brings. And after the shooting last summer, which left Scalise in critical condition for months, his triumphant recovery presented a comeback story Republicans could get behind when picking their next leader.

Then there’s the Jordan factor. A Jordan speakership would undoubtedly be one that heavily supports Trump and a hardline conservative agenda. Jordan, the first chair of the House Freedom Caucus, is known for his aggressive, no-concessions attitude.

Whoever wins the speakership needs the support of at least some members of the Freedom Caucus. And with one of their own in the race, it could complicate votes for the favorites.

“I am not interested in anybody on the current leadership team,” Rep. Paul Gosar (R-AZ), who is in the Freedom Caucus, told Vox in April.

The Jim Jordan factor hangs heavy over this race

The speaker’s race ultimately comes down to some simple math.

There are currently 237 House Republicans. Without any major changes in the next seven months, Republicans need between 215 and 218 votes to confirm a speaker. In other words, Meadows — the leader of a cohort of roughly 40 men who make up the House’s most conservative faction and Trump’s most ardent supporters — has a lot of power.

The Freedom Caucus wields enough votes to stop any speaker nomination in its tracks, and Meadows, who is known to have almost-daily personal conversations with Trump, has a direct line to the president if things don’t go his way.

These are leverage points Meadows and Jordan are not afraid to use — especially when it comes to leadership.

Only three years ago, Meadows filed a motion to remove Boehner from his seat as speaker, a catalyst for Boehner’s retirement. In 2015, the Freedom Caucus refused to support McCarthy in his bid for the speakership, saying he was too close to Boehner’s leadership team. The revolt ultimately gave rise to Ryan’s leadership.

The gripes with McCarthy weren’t necessarily personal. The Freedom Caucus is simply anti-status quo. They are in the business of moving policy far to the right, even if it tanks the whole effort altogether. And McCarthy, who was majority leader at the time, was simply seen as the next in line — part of an establishment system the Freedom Caucus has fundamentally rejected.

But a lot has changed since 2015. Meadows told reporters that McCarthy “has been reaching out, trying to keep his promises to a number of members of House Freedom Caucus that will serve him well in whatever race should he throw his hat in the ring.”

And it’s not lost on anyone that McCarthy’s close relationship with Trump plays a role. The Freedom Caucus doesn’t break with Trump often, and while the president has yet to weigh in, McCarthy has long been seen as the president’s closest leadership ally.

This might not be a race for speaker at all

Underlying all this party infighting is an understanding among Republicans that come January 2019, there might not be a Republican speaker in the House at all.

“We have to make sure we maintain our majority, and that’s got to be our focus from now until November and not to get ahead of ourselves,” Rep. Chris Collins (R-NY) said.

The timing of Ryan’s retirement wasn’t random. Trump remains extremely unpopular, and special elections across the country indicate Democratic voters are extremely energized to kick Republicans out of office — a reality Ryan’s retirement reflects. Democrats need to win 24 seats in 2018 to take control of the House, which is looking more and more possible.

Minority leader and speaker are two are fundamentally different jobs. Minority leaders don’t have much policy leverage. Like we’ve seen with Democratic Minority Leader Nancy Pelosi, the job is about keeping the members in line behind a clear party message. It’s more offensive work.

The speakership, however, has to defend its party’s legislative agenda. There’s a valid debate over which candidates — Scalise, McCarthy, or anyone else — would better serve each role.

Democrats are now eying Trump’s phone calls with Putin
The US needs real-time data to fight the pandemic. We’re still not even close.
Vox Sentences: House Democrats are down with NDP
How music has responded to a decade of economic inequality
Migrant children describe abuse, being forcibly medicated at youth shelters: lawsuit
2 Republican senators refute Trump’s Ukraine-Biden conspiracy theory